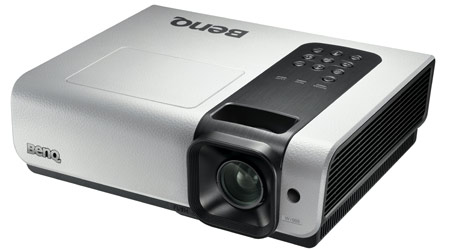 Not too long ago, investing in a DLP projector was just that: an investment. Or rather, a way of flushing serious money down the toilet of impending obsolescence. Still, it’s all you folks who forked out $10,000 for a first generation projector who have made the W1000 possible.

Thanks to economies of scale, you can now nab a full 1080p DLP projector for a buck shy of $2000 – and that’s pretty astonishing.

The W1000 finds itself at the lower price end of an increasingly crowded market. Between $2000 and $3000, you’ll find a wide range of LCD and DLP projectors. So the W1000 is definitely a ‘budget’ projector, but in these enlightened times, budget still means full 1080p HD, 24fps compatibility and dual HDMI inputs. There is also a bunch of legacy inputs for your crumbly analog gear too.

With a single Digital Light Projection chip on board, colour is handled by a rotating ‘colour wheel’. LCD and 3-chip DLP is better technology, but much more expensive.

The well-labelled remote lights up, which is handy as you’ll want to use the W1000 in full darkness. There are plenty of image adjustment options – including straightfoward Cinema/Dynamic/Standard presets which can be further tweaked to get those skin tones just the ghastly shade of unnatural you like.

Projector elitists may call the W1000 on its inability to show fine detail in very dark scenes, but these guys all spent $5000+ on their projectors. Fact is, at this price-point the image really is fantastic: excellent colour, punchy contrast.

The DLP ‘rainbow effect’, where you can spot fringes of odd colour in some areas of some images, can be seen on the projector, but not to any degree that will ruin the experience of watching it.

Colour is excellent, even those skin tones. As always, it’s worth investing in a properly reflective screen rather than projecting straight onto a painted wall – white ain’t as white as it seems when you’re watching Blu-ray!

The inclusion of HDMI and 24fps compatibility means you can plug in said Blu-ray player and really appreciate full HD, and numerous keystone and other image tweaking options via the intuitive remote mean positioning remains flexible.

The real challenge facing the W1000 is that many competing 1080p projectors perform noticeably better. These projectors are typically more expensive… but less than $1000 extra means making the choice won’t be easy.

Actual performance might not be up to the standard of today’s top-tier cinema projectors, but remember the W1000 does outperform a $5000 projector of just a few short years ago.

The real value here is in the full 1080p display at this budget price. In a dark room, the W1000 can still redefine the way you watch movies at home.