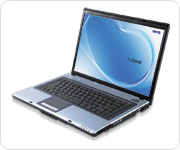 The R55 is fitted with a NVIDIAA GeForcee Go 7400 graphics processing unit, which delivers high-definition graphics and video to your R55. With NVIDIAA PureVideo technology, you can experience high-definition video with superb picture clarity and vivid colours. Also incorporated is the latest NVIDIAA TurboCachee technology, which delivers optimal system performance and provides a larger total graphics memory, so that the performance of your notebook is not compromised.

Bundled with the R55 V16 is a OEM full version of Microsoftt Office Basic and QDataTrove that allows you to instantly recover images and back up files from the HDDDs second partition. It also allows you to recover one file rather then the entire HDD.