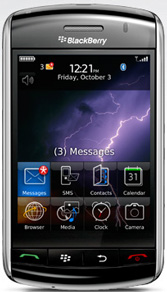 At first glance, you’d be forgiven for mistaking the BlackBerry Storm for its popular Apple-branded cousin, the iPhone. The big, shiny touchscreen, simple design, no keypad and easy on the eyes, imitation is the highest form of flattery and the Storm knows what it’s up against. But while the Storm is likely to steal attention from the iPhone with its svelte good looks – does it have the brains to compete in the new smartphone battleground?

The Storm can proudly wear the tag of feature-packed. BlackBerry email: Check. Decent 3.2MP camera: Check. Web browser: Check. GPS: Check. The list goes on – pretty much everything you can do on a smartphone you can do on the Storm. The first thing you’ll notice is the ‘clickable’ touchscreen – the beautifully wide screen physically clicks down at your touch, a satisfying response. Shame then that every time you do click, the Storm is frightfully sluggish in its own response. It feels like an age after you click an icon that the app actually opens – very frustrating.

Obviously wearing the BlackBerry tag, email is an important factor here. Mobile email lovers have flocked to the BlackBerry for its solid keypad in the past, so going all-touchscreen was a big risk. Unfortunately, they failed. Even with the click-touchscreen, it is near impossible to hit the right keys (even on the neat widescreen keyboard) and the spellchecker is rubbish. Fast, efficient email was the mainstay of BlackBerry – slow, finicky email entry is what you get with the Storm.

The web browser feels half done – it’s much better than most mobiles (which isn’t saying much) but it feels unpolished. Like email, frustrating to work with. Also, built in GPS should have been great, but slow loading and locating times are so slow you probably won’t bother with it.

For media, the Storm puts in a solid effort. It takes a micro SD card so you can pack it full of music, pictures and movies (which look stellar on the big screen).

Downloadable apps are awesome. The range of Storm apps are limited at the moment but growing, and being able to click and download an app like Facebook onto your device in moments is very handy. Not even close to the iPhone app store, but not a bad first try from RIM.

The Storm will be sold exclusively through Vodafone, so for value look at what you need out of a plan. All of Vodafone’s 24-month plans ($69, $79, $99, $119, $149) include unlimited BlackBerry email and internet, which gets top marks.

Really the only factor you’ll need to consider is how much you spend on talk and text, so investigate the details. But since the internet is so cumbersome to use, you won’t be capitalising on the unlimited offer. Ditto the email – a BlackBerry with finicky email? Unheard of.

Plans are not dissimilar from similar iPhone plans or even better BlackBerry plans which will give a more satisfying email and internet experience.

So very close, but not nearly as good as it should have been. The Storm feels like a ‘beta’ release of what Blackberry were trying to do. The design is just fantastic, the clickable touchscreen is a brilliant idea, and downloadable apps put it a step above much of the competition – but it’s riddled with annoying imperfections that will put you off from the get-go.

It’s like it tries to do everything the iPhone does and only ever gets halfway there. If you’re an email addict, the BlackBerry Bold is smartphone gold. But the Storm, sadly, has amounted to little more than a drizzle.