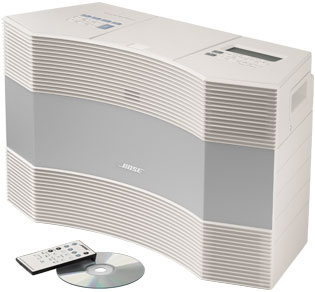 Catering for the upper-end of the middle market, US company Bose has carved a profitable niche for itself through entertainment products that are simple to use, install and conceal in every day living spaces. Described by the company as “the best one-piece music system made by Bose”, the Acoustic Wave Music System II is a pricey ($1,999) portable CD tuner that improves on the original in several main ways: internal sound processing is now digital rather than analog, the LCD is bigger and more informative, there is a talk radio mode that compensates for artificially boosted voices and the unit now supports MP3, CD-R and CD-RW discs (although not DVD formats).

The system has been designed with simplicity in mind, which makes it truly plug and play. Connect the unit to the power, load a CD or tune the radio and enjoy. Performance can vary markedly depending upon where the unit is situated so a little trial and error is required to obtain the optimal sound.Â The controls are large and well laid out, with the backlit display providing information about tuning, volume and the name of the track being played. Various play modes are available, including disc and track repeat, shuffle disc, shuffle folder (for MP3 discs) and shuffle repeat.

Adding another sound source (such as an MP3 player or tape deck) is easy, as is connecting the unit to other Bose products, such as a Bose Lifestyle system, for receiving streamed music from the main room. You can extend the playlist with the addition of an optional Bose multi-disc changer. The headphone socket can be set to a line-level output to allow the unit to be connected to an external amplifier but there is no provision to power a separate set of speakers directly if you want to also listen in a second room.

In the interests of simplicity, however, some useful features have been ‘de-selected’, namely the ability to adjust the tonal quality of the sound, adjust stereo balance or equalisation. Instead, Bose provides ‘active electronic equalisation’ for balancing the output of low, mid and high frequencies and, while the preset sound is suited to rock and pop, some manual controls to adjust for personal listening preferences and poor recordings would have been welcome. The LCD is mounted on top of the unit which makes it difficult to read from the armchair, or if the unit is positioned on a shelf.

Also absent is an optical or coax digital input for digitally connecting a digital audio source and only one set of stereo audio inputs is provided.

The unit features a digital FM/AM tuner with six AM and FM presets and a CD player with MP3 playback capabilities. Other features include a headphone jack, LCD and slim credit card-sized remote control.

Since the unit can be powered by AC, an optional Bose battery pack (available January 2007) or a DC power source from a car or boat, the unit can be used outdoors – by the pool or on a picnic – although it is a little heavy to be considered truly ‘portable’.

Bose doesn’t publish technical specifications, so no power ratings are supplied. Suffice to say, however, that the Bose Acoustic Wave Music System is capable of playing very loud and nicely fill a suburban backyard with music. This is largely due to Bose’s proprietary waveguide system, which works like a flute to acoustically amplify and channel the sound out of the unit. By effectively folding the two metre-plus waveguide into this briefcase-sized unit, Bose is able to produce room rattling bass without the need for large heavy speakers.

However, more volume does not always equate to more quality. Although the sound was not distorted, even at high volumes, we found the unit to be lacking in treble crispness and shallow in the midrange frequencies. The unit was fine for rock and dance music, good for jazz and soloists but tended to be muffled and fuzzy for complex classical and choral works. The bass was deep and solid at high levels but tended to under-perform at more comfortable listening levels in a smaller room. Since the speakers are set into the unit relatively close together, the stereo field was limited, making it difficult to discern exactly where the instruments were coming from.Â

As an integrated music system, the Acoustic Wave Music System II lacks much of the connectivity, playback features, functions and format support of compact systems that sell for a fraction (of a fraction) of its price. Happily absent, however, are the garish flashing lights of these cheaper systems and, in its favour, the unit’s no-fuss design allows it to slot unobtrusively into almost any room.

Overall
Features
Value for money
Performance
Ease of Use
Reader Rating0 Votes
Easy to install and use. Can form part of a multi-room music system with other Bose equipment. AC/DC operation. A lot of volume from a relatively small unit. Fills a large room or backyard with a lot of sound.
No manual tone settings. Limited connectivity. Heavy for a portable unit. Not ideal for all music genres.
3