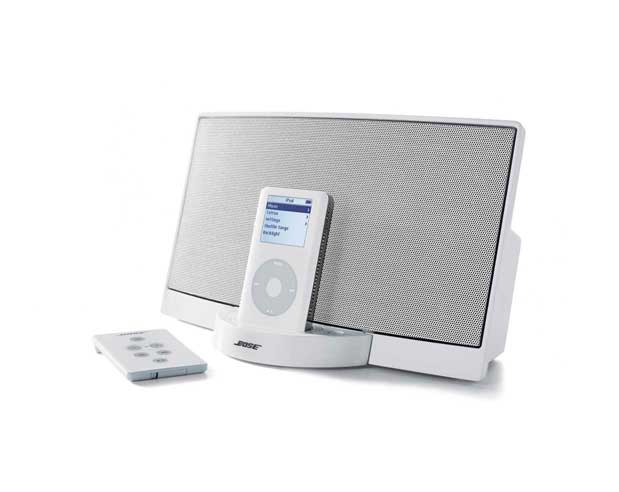 More and more people are converting their CDs and record collections into new digital music formats. As a result, vast music collections can be stored on a PC hard disk or portable music player, such as the famous Apple iPod. If you’re an iPod fan, and store your music collection from this little white marvel, there are a couple of options for listening to your music when you don’t want to use the headphones. One is to connect the iPod to a stereo via an RCA adaptor cable, but a much more elegant solution is the Bose SoundDock Digital Music System. This is a self-contained amplified speaker system, which uses Bose’s renowned signal processing technology and acoustic design to produce full-range sound from a relatively small set of speakers. You simply place your iPod into the SoundDock and it does the rest – including charging your iPod’s battery.

The problem with using your stereo or another set of amplified speakers is that you need to return to the unit to adjust volume, advance tracks or turn it off. This can be a pain when you want to kick back and enjoy your music and need to get up to find your favourite song. The Bose SoundDock, on the other hand, comes with a clever remote control that enables you to move forward and backwards through the tracks in your Playlist, adjust the volume, switch between play and pause and turn the system off. While you still can’t navigate the iPod’s menus to select an initial Playlist from the remote, it’s still a great feature once you’ve selected the songs you want to play. There are also volume control buttons on the unit itself so you can make adjustments if the remote is not to hand.

Appearance-wise, the SoundDock has the same glossed white as the iPod and is largely consists of a single rectangular grey meshed grille for covering the speakers. The unit is surprisingly heavy as well, which denotes the quality of materials used. The remote control is very small and light so it isn’t in danger of being broken when dropped. A single cable leads out of the SoundDock and connects to an external power brick before the lead reaches mains power.

The docking cradle protrudes from the unit so your iPod sits front and centre when connected. Adaptors are included so different iPods can be used including Mini and Nano variants, plus all versions of the regular iPod.

In terms of audio quality, the SoundDock really comes into its own for a unit of this size. Sound has surprising depth, with good bass as well as midrange and high tones. The speakers don’t distort either when turned right up, and the amount of volume on tap is, again, surprising considering the SoundDock’s diminutive proportions. The volume ramping feature is a nice touch as it gradually increases the volume to where it was set when the system was turned off previously.

Ultimately, the SoundDock is an ideal music solution for anyone who wants to enjoy the music stored on their iPod without headphones. It can be used in place of a mini-system (and sounds better than many) and perfect for apartments or units. It also makes a great second system for the bedroom or kitchen – although there’s more than enough volume on tap to fill one room. The only thing lacking in the SoundDock is any type of audio-in or out connectors, so you can run other devices through the speakers or charge the iPod while sending audio to another device.