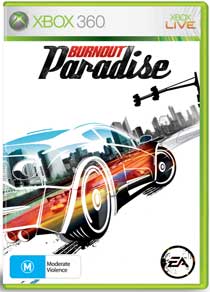 The Burnout series has always been a super-arcadey, fun and very, very fast racing game. The latest in the series, subtitled ‘Paradise’ continues the tradition but offers a significant evolution on the game play that, if the developers did nothing else, would extend the life of the game by, ahem, miles. Or should that be kilometres?

The element of evolution we’re talking about is the game world itself. Previously quite a controlled game environment, channelling the player down pre-set playing modes and dictating the pace of play, Burnout Paradise instead presents the gamer with a massive, open, free-roaming world for creating racing havoc. It’s huge, it’s incredibly detailed, it’s fascinating and it’s varied. Keep the adjectives, chuck away all the other bits in that last sentence and you’ve pretty much got the ingredients for a first-class gaming world for any kind of videogame.

As it is, though, developers Criterion have done a whole lot more than just that one thing. This time around, the vehicles are way more interesting; still unlicensed, so no Porsches, Ferraris, Lambos, Mercs or anything else that you’ll recognise by name, but there’s enough variety and resemblance to real-life marques here to keep any car nut happy. And there are lots of them. The 75 vehicles fall into one of three categories: Speed, Stunt or Aggressive and, if the in-game commentator (a friendly DJ-style adviser that’s been brought across from EA Big’s stellar SSX snowboarding games, if we’re not mistaken) is to be believed, each type is best suited to particular race or task types (the speed type, for instance, is rather obviously best suited to the race ‘missions’, and so forth).

But the best thing about Burnout is surely the sheer thrill the game gives players as they hurtle around in those cars. Not only can the sense of speed be so great it becomes nearly overwhelming (“my eyes! They bleed!”) and you need all your synapses firing to avoid constant terminal collisions, but the crash mechanics (not too strict) and resultant animations (deliciously destructive) are a blast. Just about every 20 meters or so there’s something fun to do: an inviting ramp, gates to crash through, a speed boost, repair centre or new paint job, a race, stunt or other challenge, a bridge jump and all sorts of other cool things to check out, including a huge number of billboards to destroy, sometimes tantalisingly close but seemingly impossible to reach. Then there’s the seamless transition to online play – beautifully implemented in the game and a lot more fun than the one-dimensional ‘bag as many kills as possible’ game play seen in other games. Frankly, if you get bored playing this game, you’ve just self-diagnosed yourself with ADD, no question.

This year’s Burnout game is so well designed, the visceral thrill of screaming through the massive city is so well realised and there’s just so much to do, even if you hate the straight-up racing (which you’re never forced to do in any case), this is simply the best arcade racing game available right now. The only blemishes we see is that the challenge of the single player mode, if you’re not a fan of online play, can (eventually) become repetitious and the constant urgency of the game can occasionally harass more than entertain, as you squint at the tiny map in the bottom corner of the screen desperately trying to map your route out mid-race while your adversaries sprint past you. Still, you can always try again.

This review was conducted on an Xbox 360 console. Burnout Paradise is also available for PlayStation 3.