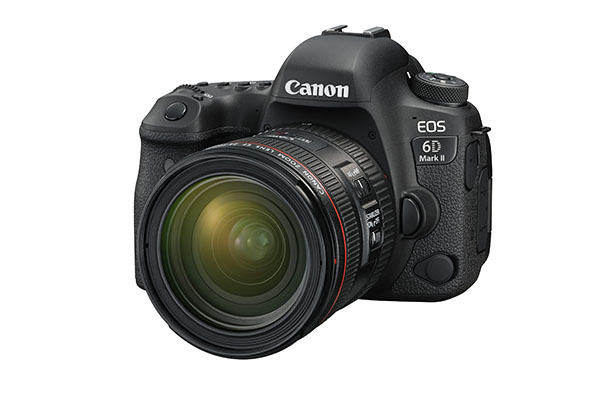 Is the Digital Single Lens Reflex camera on the way out? I’ve given up trying to predict the future. But right now, the Canon EOS 6D Mark II DSLR lays claim to a strong future for this type of camera.

The last several interchangeable lens cameras we’ve reviewed here have been mirrorless. It is the mirror that’s the “Reflex” part of DSLR. You know, “reflex” is kind of like “reflection”. A mirror reflects light.

To recap quickly, a mirrorless interchangeable lens camera captures the image falling on its sensor and sends that to a little flat display panel. You put your eye to the eyepiece, and it focuses on that flat panel.

(More correctly, you’re seeing most of what’s coming in through the lens. In a DSLR, the image through the viewfinder is rarely the full hundred per cent of the field of view. But this camera manages an impressive 98%, so the differences are academic.)

That means that in a DLSR a mirror is in front of the sensor. When you press the shutter release, the mirror pivots up out of the way before the shutter operates, then slaps back down into place afterwards.

Because you’re seeing an optical image through the lens, it doesn’t have all those fancy assist features, like focus peaking. You can preview depth of field (adjusted by the aperture settings) thanks to a dedicated button on the camera body, but in order to do that, it narrows down the aperture which can make it too dark to see the depth of field anyway. These are the kinds of compromises left by adhering in the digital world as closely as possible to the analogue film technology of 35mm.

Adjustments, not compromises. You see, you can select something calls “Live View Shooting”. This flicks the mirror up out of the way, and the camera essentially becomes mirrorless. You can’t use the regular viewfinder, there no longer being a mirror to reflect the light. But you can instead use the rear touch sensitive monitor for framing. Indeed, you can use the monitor for selecting a point of focus and exposure setting.

In short, it’s also kind of like a mirrorless camera too, at the touch of a button. The rear monitor is on a universal hinge. Like the higher Panasonic models, you can swing it out and look at it from pretty much any direction, allowing very convenient framing from all manner of weird angles.

The sensor behind the shutter, and behind the occasionally present mirror, is a 26.2 megapixel CMOS unit. That works out to a maximum resolution of 6240 by 4160 pixels. It can shoot JPEG and RAW, with 14-bit encoding for RAW to allow much subtler shading than the 8 bits of JPEG.

The image sensor is “full frame”, which is to say that it pretty much matches the size of a 35mm film negative. It measures 35.9mm by 24mm. The camera uses Canon’s EF mount. It being Canon, lots of third-party lens makers also make compatible lenses. Canon included the EF 24-70mm F4L IS USM lens, which you can pick up for around a thousand dollars. The “M” in the name means that it has a macro capability.

The camera is fairly big and chunky, as you’d expect from a full frame DLSR. It has an LCD monitor on the top right showing such things as aperture and shutter speed and battery status. The main mode dial is at the top left. This allows selection of the traditional modes, such as fully automatic, program automatic, aperture priority, shutter speed priority and manual. It even has a “Bulb” setting for the ultimate in long exposures. The drive mode – with things like burst shooting of up to 6.5 frames per second – ISO and autofocus type have dedicated buttons on the top. You tap them and then adjust with the knurled wheel on the top. To adjust exposure compensation you use the wheel around the outside of the arrow key cluster.

In general, I found these adjustments a little harder to use than usual. I had to take my eye away from the viewfinder to make sure my fingers were doing the right thing.

The Canon EOS 6D Mark II incorporates a feature potentially more useful than Wi-Fi. That’s GPS. Yes, the camera can geotag your photos without you having to pair it with a phone. There are two modes available. One is the expected one: whenever you switch the camera on it looks for, and after a minute or so finds, the GPS satellites. Then whenever you take a picture, it includes the latitude and longitude data in the photo’s EXIF data.

The other mode keeps the GPS function going, even when the camera is switched off. That way the geotagging will work all the time, not only after a pause. That uses more battery of course.

Viewing the photos later in a suitable viewer, such as the Windows 10 “Photos” app, presents a map showing where you were when you took the photo.

The camera also has Wi-Fi built in for remote control, wireless printing and transfer of photos to a phone.

Using the Canon EOS 6D Mark II took me back. Just the feel of it as the mirror swung up during the picture taking brought me back to the SLR’s I’ve used over many years, including DLSRs, rather than the mirrorless models that have recently dominate my usage. There’s a certain lazy feel to the slap of the mechanics when you take the picture, but that matters not. The picture results were uniformly impressive.

Autofocus was fast and assured. I’ve mentioned that changing things like exposure compensations are rather fiddly, and I did find myself reluctant to use some of the features for that reason. I expect if this were my full-time camera I’d get better at it.

Switching between mirrorless and standard modes was just a touch of a button.

Of course, a determining factor for picture quality is the lens. The supplied one was quite large. Indeed, the whole camera was a substantial carry. The 24mm to 70mm range was useful, and since the images were sharp on the 26MP sensor, and the optical image stabilisation very effective, you can effectively zoom in even closer in post-production.

It was with Canon DSLR cameras that the use of digital still cameras for cinematography become a thing. The Canon EOS 6D Mark II certainly supports video, but only up to 1080p. There is a 4K mode, but that’s only for generating output from time-lapse photography (at an amazing 500Mbps!).

When I opened up the connection hatch on the side of the Canon EOS 6D Mark II, I was startled to see a blast from the past. Next to the mini-HDMI connection was the data transfer port. And it was a Mini-B USB socket. It has been several years since I’ve seen one of those in use on a new piece of equipment. You don’t get a cable for that in the box, and it took me a while rooting around amongst my cables before I was able to turn one up.

There were 102 files on the memory card, amounting to 1.51GB in size. All but five were JPEG; the rest were video files. I plugged the camera into my computer and dragged them all into a folder. The transfer took one minute and seven seconds. That works out to around 23MB/s. Not too bad, I guess, although you’re typically going to do better by popping out the card and using a reader.

Canon doesn’t favour us with a recommended retail price, so the prices quoted herein are those indicated by online retailers. Basically, you’re looking at somewhere from a little under $2200 and up for the Canon EOS 6D Mark II, sans lens. If you’ve been a Canon user for a while, you may already have plenty of lenses, and need spend no more. The f/4.0 24 to 70mm zoom provided with the review camera will add something like another thousand dollars. The f/2.8 version more than doubles that price. There are wide angle lenses. Fast ones down to f/1.4 (maybe even lower … I didn’t search exhaustively) And long, long lenses if you want. At the extreme, there’s a 200-400mm zoom with a maximum f/4.0 aperture across its range – available for around $12,000!

So are DSLR camera’s on the way out? The Canon EOS 6D Mark II shows that they need not be, that the size inherent in DSLR may well be worth it.

Canon’s product page for this camera is here. And for the lens is here.

Overall
Features
Value for money
Performance
Ease of Use
Design
Reader Rating0 Votes
Takes excellent pictures, can work in mirrorless mode with the touch of a button, flexible viewing screen, great range of Canon and other brand glass available.
Rather large and heavy.
4.5