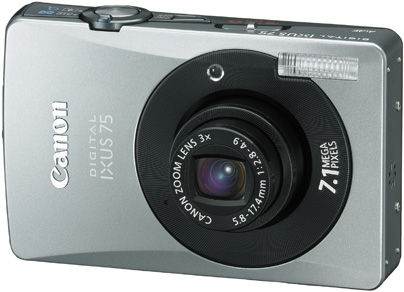 Easy to forget, now that slim cameras are all the rage, that Canon was out their first, with its slender IXUS cameras. Now the company has taken the styling trick even further and crafted the steel-bodied IXUS 75, so it not only looks terrific but, ergonomically, feels good in the hand. It looks good when held vertically and horizontally: a simple ploy, but it sure makes the camera easy to hold for landscapes or portraits.

These days it seems like everyone wants to build auto face detection into their cameras. Canon is the latest to do so, as the camera senses the presence of a face in the shot, then selects the correct focus point and the right exposure before you shoot. There’s only one caution: it may not work as effectively if the face is turned sideways or placed at the edge of the picture.

Canon has also followed its competitors with an in-camera red eye correction feature. This removes annoying red-eye in portrait flash shots. The system can auto detect reddish pupils in a face or you can frame the eye area manually, before the image processing starts. The camera can either write a new image file or over-write the original. Do it as many times as you want on a shot, but be warned, excess red eye correction will eventually harm the shot’s quality.

The lens has 3x optical zoom power and images to a large 7.1 megapixel CCD. The largest image size is 3072 x 2304 pixels, which will ensure a 35 x 26 cm final print. Using the camera, it’s a surprise to find the continuous shooting mode is only 1.7 fps.

Movies can be shot at the 640×480 pixel resolution level at 30 fps. There is a limited editing mode built in so you can slice and tidy up your video shooting efforts; the new video can be written and replace the original or saved as a new clip.

Flip the camera over and you immediately become aware of the IXUS 75’s main feature: an enormous 7.6 cm LCD screen, that swamps almost all the rear. Some will miss an optical viewfinder, but really, where would you put it?

The top sensitivity of the IXUS 75 is a high ISO 1600, useful if you know what you’re doing but many have found low light shooting is better done with a low ISO figure and some tweaking in software later to lift the brightness.

Another Canon speciality is the panorama shooting mode. Shoot sections with this mode and by using the supplied Photo Stitch software you can create impressive panoramas, merged from the software.

A top performer, the IXUS 75 captured high quality images in a variety of situations and differing light.