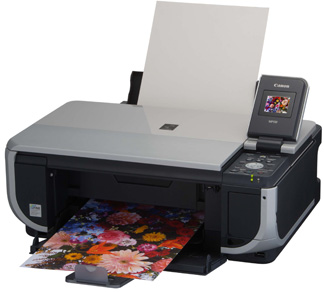 Canon’s PIXMA MP510 is an all-in-one printer with an almost perfect marriage of speed, print quality and features at an enticing price point.

If you’re a child of the 80s – and many of the best people are – then you’ll recall the Transformers, small toy robots that could be twisted and folded into new mechanical shapes. Canon’s PIXMA MP510 bears a similarity with the transformers, as it truly is more than meets the eye, with more than its fair share of hidden panels, pop-out additions and sliding chunks of plastic to play with.

To the bare eye you’ll make out the scanner tray, but next to it is a fully flip-out 4.8 cm LCD screen that covers the main on-printer control panel. That sits above a pop-out door that hides the media card readers. Even the paper out tray is seized by Canon’s seeming mania for hidden plastic, as the extending tray slides out in the fashion of a flick knife, and even that’s got a pop-up stopper to end the tray array itself.

The MP510 covers the standard three bases of any MFC – printing, scanning and copying – but not faxing, for which you’ll have to spend a touch more money on a different model. It uses four distinct ink cartridges – black, cyan, magenta and yellow – each of which can be individually replaced, and each of which is tracked by the MP510’s driver, once it’s installed. The inbuilt scanner has a top resolution of 1200 x 2400 dpi, which is acceptable in a printer at this kind of price point.

Be thankful that you only normally have to install an MFC once, because if there’s a black mark to be made against the MP510, it’s that the setup process is quite convoluted and extremely lengthy, from installing each of the print cartridges to installing the software suite; on one of our test computers it gave itself an estimate of 20 minutes to get everything installed! Everything in this case includes drivers for the MP510, EasyPhotoPrint, ScanSoft OmniPage SE, ArcSoft PhotoStudio and MP Navigator, which is used for scanning documents and photos, as well as using the MP510’s media slots as basic card readers.

The MP510 performed very well in standard black-and-white printing, taking an average of 25 seconds to shoot out each full coverage page in our tests. Even the initial page, which will normally take a little longer while the printer processes the information from the host PC, only took another five seconds above the average. Likewise, it was snappy at printing out 15 x 10 cm (6 x 4 inch) photos, taking an average of 70 seconds per print, with very good quality for a photo printer in this price category.

It’s a very minor point, but two cable aspects annoyed us with the MP510. Firstly, the power cable for the printer is quite short, which can effect where it can be placed without resorting to an extension cable, and secondly, like too many other printers on the market today, the MP510 ships without a USB cable in the box, so you’ll need to budget for one when you pick the printer up.

The MP510 represents exceptional value for a printer in this price category, and it’s hard not to like its foldaway features, which keep it from cluttering up your desk unnecessarily.