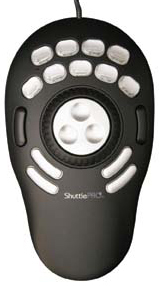 Frank McLeod loves his ShuttleXpress, so we found him a bigger brother to play with, the ShuttlePro V2.

Soon after sampling the delights of video editing, I found out about jog/shuttle devices via my five button/twin rotary Contour Design ShuttleXpress. These units concentrate detailed editing control in one device by allocating button or dial controls to selectable keyboard shortcuts. Among other things in the out-of-the-box configuration, they make it a breeze to move through the timeline either one frame at a time, or at various speeds in both forward and reverse directions.

I love my ShuttleXpress, but when the idea arose that I might review its much more sophisticated relative, the ShuttlePro V2, I jumped at the chance. If enough is great, then surely a whole lot more of the same must be exquisite?

The V2 is a low-profile, almost flat, desk-hugging accessory with a blunt egg-shaped, footprint that narrows (waist-like) towards the sharper end. The wider end faces away from the user and the USB cord extends out from its centre. At 30 mm above the desk, and at the highest point on the back of the Shuttle, is the two-part jog/shuttle controller. The middle alloy dial is the jog wheel and it has three indentations on its surface for easy manipulation and fine control by a fingertip. (The ShuttleXpress has only one of these fingertip hollows and that is not as convenient.) Around this is the shuttle ring, for larger movements through the timeline. Both these circular controls work in forward and reverse.

The jog/shuttle is surrounded in an almost circular arrangement by 15 programmable buttons. Near the top, two rows of four and five clear buttons respectively, are arrayed in a curved fashion not quite parallel to the top end of the body and arcing around the jog/shuttle control. Further down, on either side of that control, are two elongated black buttons, also curving parallel to the jog/shuttle perimeter, but this time aligned with the long axis of the body.

More or less completing this circular arrangement are two pairs of elongated silver buttons, again bowing around the ShuttlePro?s centre point but this time closer to the sides of its body, leaving a clear section of ‘deck’ in the middle.

While some devices might be able to do something with only generic software supplied by the OS, this little gem “takes ya nowhere ‘n tells ya nuttin” without the provided software. There are basically two ways to use apply this software – either use the presets, unmodified, or reassign the various buttons to suit yourself.

Contour has obligingly provided a large number of preset configurations which dictate the function of each button when working within a particular software application. This range is extensive, for both Mac and PC, and can be seen at the Contour Design website. When recognised software is activated, that program immediately gains the ShuttlePro’s attention. By the way, the Contour Shuttle range is compatible with both Windows PC and Macintosh systems.
Ã‚Â
All of these arrangements, as mentioned, can be altered to suit the individual user and the target application can be changed at will.

The software is really easy to install and use, and intuitive once you have had a look around its options. If you need assistance, there is an extensive Users Guide on the accompanying CD. Being always available in the background, easy access to the controller setup is via an icon placed in the System Tray.

Setup of the V2 is very much a personal matter and determined by the way you work and your own idiosyncratic preferences. It is a bit embarrassing to say, but as I was coming to grips with the SP2, I happened to notice in my reading that most users operated the shuttle with one hand and their mouse with the other. I really hate ‘D’oh!’ moments, but this was one. Given that I had been using the ShuttleXpress for more than a year and not worked this out myself this revelation was not good for my ego.

Initially I thought it might be difficult to get used to all the buttons an all their possible options. However, while I don’t claim to move about it with the dexterity of a concert pianist, it did not take me long to have my left hand on the ShuttlePro playing a nice duet with my right on the mouse. I still have to look at the buttons and occasionally check my printout of the button assignments (nicely done by the software itself either as a ‘you label it’ PDF file or a slightly misaligned labelled HTML file) but it is all improving with continued use.

One difference I did notice between the Xpress and the Pro V2; in use, the Xpress slides a bit too easily around the desk on its small hard plastic feet. Because it is round, it is difficult to maintain orientation of your hand on the five buttons unless you keep feeling for the cord, which comes out at its top centre. The Pro V2, on the other hand, has feet of a different compound and sticks much better to its desk position, retaining its orientation.

Apart from Adobe Premiere Pro 2, I also tried the Shuttle with Ulead Media Studio Pro 8 and Video Studio 10 Plus. While it worked perfectly in Media Studio, the jog wheel did not work at all in the multi-trim section in Video Studio. This was a surprise as it had worked as it should in earlier editions of that program. To the time of writing, the manufacturer, Contour Design, has not been able to provide an answer for this, with Ulead saying only that “we don’t support this device”.

It really depends on how you set it up. For me this is still a work in progress, but the direction is all positive. There are some functions that you would not change, however, as they are purpose-specific for roles in video editing, such as the jog and shuttle sections.

The shuttle wheel is very handy for moving quickly either backwards or forwards through the time line. The jog wheel moves one frame for one click again in either direction. Various buttons can be programmed for various uses, but the one I use so far in Adobe Premiere Pro 2 includes mark in and out, play/pause, undo and redo, go to the end, go to beginning, next edit point, last edit point, select razor/scissor tool. The suggested allocations for these buttons did not work for me, but they well might as my experience increases with both the Premiere Pro and the ShuttlePro.

Whether or not a function works depends on which window has the focus, and not all functions are available in every window.

While I have only addressed its use in video editing, the Contour ShuttlePro V2 can be used with any software that has keyboard shortcuts. In those circumstances its use is limited only by your own imagination.

Once used to a shuttle attached to your computer, it is difficult to go back to straight keyboard and mouse editing. I am aware that some editing software comes complete with multiple keyboard shortcuts, but personally, I find remembering 50-plus shortcuts more of a cerebral load than I need to carry. Fifteen buttons on the V2 are still more or less in my comfort zone and I have no desire to leave.

When I bought my ShuttleXpress, I truly did not think I could justify the additional $100 for the more complex V2. However, having now been exposed to the greater flexibility of those additional 10 buttons – and having suddenly found my left hand – this gadget is now definitely on my birthday gift wishlist.

Overall
Features
Value for money
Ease of Use
Reader Rating0 Votes
Flat profile, ergonomic design, stability on desk, ease and practicality of use, overall feel of the device, flexibility of the software.
Problems working with Ulead Video Studio 10 Plus.
4.5