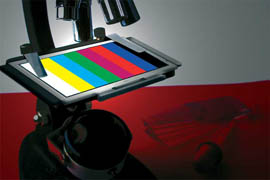 Can you trust the figures TV manufacturers give you? Steve Polak delves into shady world of contrast ratings.

Statistics and specifications can make life easy and they can certainly make it really difficult too. Take the process of buying a current state of the art plasma screen TV for example. Manufacturers love to throw statistics at you and the current flavour of the month is the ?contrast? ratio statistic. These can range from 3000:1 all the way up to 10,000:1 ? but are they a fair indicator of a better screen?

If you are an audio fan you might recall how some companies and sales people use power output statistics in a variety of different forms to make the amplifier they?re selling sound more powerful than it really is. Amplifier output can be measured in terms of ?peak power?, which is overused stat that really doesn?t tell you much. The real benchmark when looking at an amplifier?s output is RMS (an acronym which stands for ?root mean square? power). Peak power only really tells you that in certain circumstances and amp can hit an output of a certain wattage, but that it can neither maintain it or work at that level without distorting the sound badly. RMS is a real value which genuinely tells you how powerful and amp is and very in comparing similar devices. So ?peak? outputs are hokey and can be easily manipulated.