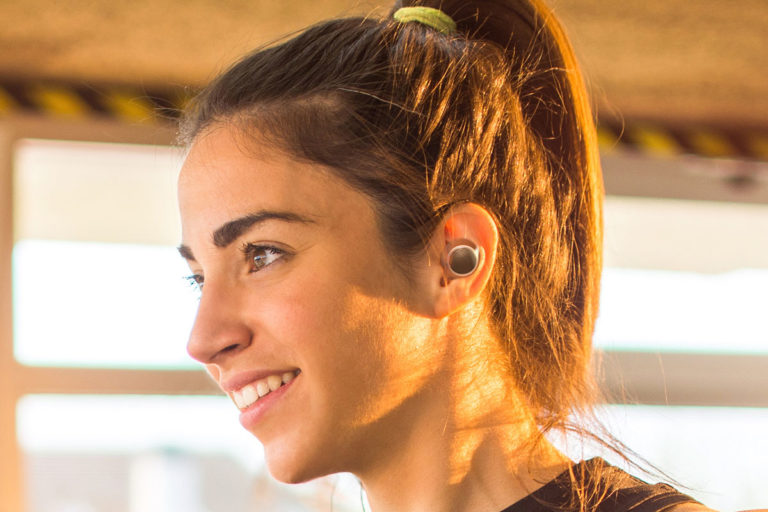 With an interesting design concept and Creative Technology’s considerable experience in digital signal processing of audio, what might the Creative Outlier Gold true wireless earphones offer?

Well, the first thing they offer is an extremely low price. As I write, the Creative Outlier Gold headphones are selling at the Creative Technology website for a promotional price of just under $120. But normal pricing is only $140. I was honestly a little shocked. Build, style and brand name had me expecting $250+ before I looked it up just this past moment.

So, why did I think the price to be so high? First, the case and styling. As true wireless earbuds they conform to the small buds plus case convention. The buds are small, weighing 5.6 grams each. With their gold finish they look stylish and barely protrude from the ears at all. The case is unusual, featuring a sliding drawer to accommodate the buds rather than an opening lid. The buds are drawn into place with magnets. Four LEDs on the end of the case indicate whether the buds are properly connected and the charge state of the case.

There’s a second reason I was expecting a higher price. The case is not especially large, neither are the buds, yet both are rated at astonishingly long run times. The buds: 14 hours. With the case, a total of 39 hours. The case is charged via USB Type-C. It measures xx by xx and weighs 66.7 grams including the buds.

The buds use 5.6mm graphene drivers. They come with three different sizes of silicone tips. They connect to your phone via Bluetooth 5.0 low energy. Which brings me to a third reason I was surprised by the low price: they implement not just the basic SBC codec but also AAC (the best for iPhones) and aptX (available on a lot of better-quality Android phones).

A slip of paper in the box – “Read Me First!” – tells you not to connect and start using the Creative Outlier GoId earphones until you’d installed the Creative Super X-Fi app, which incorporates something called “headphone holography”. The idea is that the signal is processed to reduce the in-your-ears feeling of sound that you often get with headphones. That makes them sound more like high end speakers out in the room. Apparently, it’s also supposed to provide some level of surround effect with movies.

So I dutifully downloaded and installed the app. This includes a music player, a highly configurable EQ function (you can drag an EQ curve around with your finger) and a “personalisation” function. The latter involves the app “mapping” your head and ears. You do this by lining up on-screen templates from the app with your left and right ears and face. I was unable to do the lining up by myself so I got my wife to point the phone’s camera. You will need to recruit someone else to help you.

So, why map these things? I’ll take an educated guess here. The sound you hear is shaped by your listening environment and part of that environment is the shape of your head and ears. I suppose that one could model the effects they have on the sound and then digitally process it to match before delivering it to the buds.

I couldn’t find a way of switching this personalisation on and off, so I couldn’t really form a fair judgement of its effect, as opposed to the general performance of the buds.

More on the app

Another part of the “personalisation” is that the app adjusts itself to whichever ear gear you are using … and they need not be Creative Technology models. The app of course automatically recognised that the Creative Outlier GoId earphones were in use. But I could have selected several models from each of the major brands to use with some of Creative’s headphone amplifiers. Presumably it processes the sound to optimise it – in Creative Technology’s judgement – for those different models.

But there are limitations. With the Creative Outlier Gold earphones, at least, the DSP work is done in-app, not in the earphones. And that means the headphone holography and any EQ you choose will only work when you’re listening using the app. So, when I was listening to podcasts using my favourite podcase app, I was hearing the raw, unprocessed sound of the buds. Likewise when I was using TIDAL and Spotify. To confirm, I experimented with ludicrous EQ settings in the Super X-Fi app while listening with those other apps and thee settings made no difference to the sound. But the EQ settings did certainly affect the sound of music played using the Super X-Fi app.

Meanwhile, since the app itself can only play music that’s on your device, it’s fairly limited.

When all was going well, I found the sound quality of the Creative Outlier GoId earphones somewhere between okay and quite good.

I did most of my serious listening streaming quality music from TIDAL. I compared several of the same tracks between the MP3 versions on my phone, played through the Creative Technology app, and TIDAL, and the latter was generally significantly better. I’m not inclined to blame the app. My CD rips likely came from earlier, un-remastered, CD releases. TIDAL tends to offer the most recent (which often means better) version.

There was a slightly recessed lower midrange which tended to deliver a slightly hollowed-out sense to the music, but this was mild. Nonetheless, the sound was consequently a little closed in, and seemed to feel less lively than with some rather more expensive earphones. The treble was controlled and sometimes it was nicely airy, but also seemed a touch below the upper midrange in level.

Bass was solid and in balance at least down to 40 hertz, and probably below that. Kick drums came through with a very nice thump. Drumming was clear and audible – as were most strains within all the music I tried – but again didn’t have quite the sense of bounce and coming through the mix that I prefer.

Overall, I didn’t think the sound very accurate or engaging. It was merely serviceable.

The big disappointment was the connection with my phone. Much of the time the connection seemed fine – I managed a clean fifteen metre connection with my regular test. But then, seemingly randomly, the connection would just go off. I’d be driving along listening to a podcast, and then dropouts would start happening for no apparent reason. I’d be in the kitchen cooking some dinner with the phone on the bench, no more than two metres away from me at any time, and the sound would stop for two or three seconds at a time. Sometimes the connection was fine when the phone was in my pocket. But often it would be very flaky.

I’m writing much of this review while sitting in a coffee shop, streaming music from TIDAL. Every so often there are these little blips in the sound, almost like scratches. Is it TIDAL? No, I switched over to the Creative app to play some music on the phone and this suffered the same thing but worse. But then it stopped. I’m back on TIDAL and the sound is fine. When I went back to my office later? No more of that particular interference. Was it something in the airwaves there?

Worst of all, on at least four occasions throughout my couple of weeks with these earphones, the connection break was accompanied by a very loud, sharp burst of static, a single transient as though something had broken, through (mostly, I think) the left bud. It only lasted an instant, but a couple of times it was verging on painful.

All that was odd because the buds were amongst the fastest that I’ve used at connecting to the phone, doing so rapidly whenever I’d take them from their case.

The ear seal was very good, giving excellent isolation from surrounding noise. The control buttons on both earbuds were really quite stiff and took a hard press to operate. They could have done with being a lot softer. You can skip tracks with a double press. I could not operate the button fast enough to successfully use that control. One unusual feature is that you can control the volume level from the buds.

I have noticed that several other reviewers seemed to enjoy the sound of the Creative Outlier Gold earphones. So perhaps it’s an individual thing. There’s a lot of potential here, with a stylish and practical smart design and a very low price.

You can check out all our reviews of true wireless earbuds here.

Creative BT-W3 – add BT 5.0 and aptX to almost anything (review)

Creative SoundBlaster Play 4 – a DAC for work and play (review)