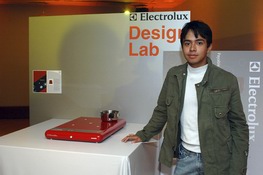 International design competition Electrolux Design Lab 06 has yielded a portable cooktop with a completely new twist: it can be operated anywhere and uses renewable energy as a power source.

A Mexican university student Eduardo Segovia created this unusual cooktop which he has named Vessto, an anagram for stirling stove, a portable ceramic cooktop powered by an advanced interpretation of an engine created in the 1800s known as the Stirling engine. Heralded for its quiet operation and energy efficiency, today it is mainly used in submarines, where silence and efficiency are a must. Segoviaas advanced version of this engine uses heat from the stove to expand and contract small amounts of gas inside the appliance which powers the product.

Vesstoos touch sensitive and digital control panel is also powered via this concept. Illuminated by an organic light emitting diode (OLED), the display requires only a minimal amount of power to function. The control panel manages the four cooking points while also offering a screen displaying recipes, notes or other related cooking information which can be downloaded from the internet.