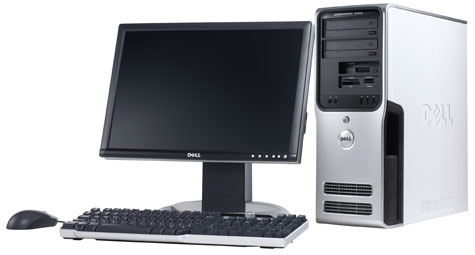 PC technology has increased at an exponential pace for years, to the point where we have multi-core gigahertz-level processors and gigabytes of memory as standard. As such, all of today?s PCs have more than enough horsepower to handle just about any regular office or creative application without batting an eyelid. However, the same is not true for 3D games.

Games, such as the Elder Scrolls IV: Oblivion, continue to push even top-end PCs to their limits, stressing the CPU, memory, hard disk and especially the graphics card. This means buying a capable gaming PC on a budget is a significant challenge.

Dell has a wide range of basic PC models on offer, including the Dimension 9150, which is coined as a ?multimedia powerhouse? and is targeted at gamers. We?ve taken a look at the 9150 and its broad range of configuration options to try and assemble a decent gaming PC for around $2000.

Dell has a history of engineering robust and cleverly designed cases, such the solid chassis of the 9150. It?s also whisper quiet, which is a good thing for when you?re sneaking down a dark dungeon corridor.

There are plenty of configuration options on the Dell website when it comes to specification. Most of the recommended options are a good place to start, and if you?re willing to invest a little bit more, you can always opt for a larger hard drive or add extra features such as a printer or wireless keyboard.

The base configuration includes a decent 160GB SATA (Serial ATA) hard drive and a dual layer DVD+/-RW burner. You don?t get a floppy drive by default, which is not a problem unless you know you?ll need one, in which case it?s a $22 upgrade, or $51.70 with a media card as well. You also get a 48 cm (19 inch) TFT display as standard, which is a good choice for gaming.

Unfortunately you don?t have many options when it comes to sound and speakers. The integrated 7.1 audio does a reasonable job, but audiophiles may want to upgrade to the Sound Blaster X-Fi XtremeMusic for a bit under $100. Sadly, you?re limited to the basic stereo speakers and subwoofer, so if you want a more wholesome audio experience you may have to invest in a third-party 5.1 surround speaker system.

The warranty is only one year by default, and if you can spare the cash, upgrading it to a three-year warranty is recommended. Doing so will set you back $124.30, or you can go for the premium on-site three-year option for $327.80.

The most important features in a gaming PC are the processor, memory and graphics card. It?s crucial to establish a harmonic balance between these components in order to eliminate performance bottlenecks and keep the price to a reasonable level.

The 9150 gives you a wide range of processor choices, all of them based around the Pentium D 9-series of dual-core CPUs. The price differential between the various processors is not huge, but the base level 3GHz Pentium D 930 will give you plenty of performance in games, so you needn?t spend more on a faster processor.

Being dual core will help you when it comes to running multiple applications simultaneously. However, games are still predominantly single threaded, so they will only be using one core at a time. This means the dual-core processor doesn?t actually give much of a boost to gaming. However, games in the future will become increasingly multithreaded, so investing in a dual-core processor now is not such a bad thing.

Dell often has special offers if you order online, and in the case of the 9150 you get an extra 512MB of DDR2 memory, bringing the total to a respectable 1GB. For gaming, 1GB is the recommended minimum, but if you have more money to spare then 2GB will give you some welcome elbow room.

The most critical performance component for a gaming PC is the graphics card, and unfortunately Dell doesn?t give you a huge range of options in this department. If you hope to play the latest games, such as Oblivion, then you need a GeForce 7900 GS as the absolute minimum, the lower alternatives will only result in a slideshow rather than smooth motion. It?s a pity Dell doesn?t offer other mid-range cards like the GeForce 7800 GT or ATI X1800 XT, which would be a little faster than the 7900 GS.

If you don?t mind blowing the $2000 budget then the best choice is the ATI Radeon X1900 XTX, which will give you smooth frame rates even at high quality settings,  but it?ll cost you over $600 more.

Dell?s Dimension 9150 is more of an all-rounder rather than a gaming-specific PC, but by making the right component choices you can turn it into a decent gaming rig.

You?ll be able to save a bit of money and customise a little more if you go to a local PC vendor, but if you want the reliability of Dell, with its phone support and ease of ordering, then the Dimension 9150 is a decent choice.