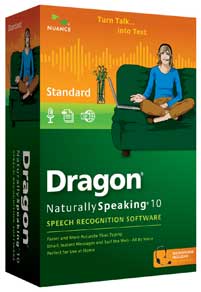 Nuance Communications, Inc. have unveiled Nuance’s Dragon NaturallySpeaking 10 software, a breakthrough new release of the world’s best-selling speech recognition software. With Dragon, people can write documents and emails, search the web, and even control their PC entirely by voice, saving time and boosting productivity. Because most people speak at least three times faster than they type, Dragon makes it possible to get things done more quickly by voice than by relying on keyboards and mice alone. Dragon 10 is nearly twice as fast as the previous release and can deliver accuracy up to 99 percent, while never making a spelling mistake.

Dragon NaturallySpeaking software from Nuance is used by millions of people – in the office, at home, at school, on the road, even in the operating theatre – to get more done faster by voice. The new release of Dragon delivers what matters most in speech recognition – superior levels of accuracy, seamless integration with the most popular PC applications, and unrivalled ease of use – and introduces new features that promise to help anyone get more done, faster.

Typing speed: For more than a year, Nuance has hosted a typing test on its website (link opens in new window) to highlight the boost in speed and accuracy that is delivered by Dragon. After testing 35,000 people, Nuance found that the average typing speed was 35 words per minute (WPM), down from previous estimates of 40 WPM. Even more significant, the data showed that the average accuracy was only 58 percent. Dragon’s near-perfect accuracy means less time spent pecking away at the keyboard and more time actually getting things done – at speeds of up to 160 WPM. Significant improvements to the Dragon NaturallySpeaking recognition system have yielded an accuracy improvement of up to 20 percent over the previous release, resulting in speech recognition accuracy levels as high as 99 percent. In fact, the product actually learns from corrections over time, making speech a more natural and satisfying experience. And, perhaps best of all, Dragon will never misspell a word.

Dragon Voice Shortcuts: New Dragon Voice Shortcuts collapse common multi-step tasks into direct voice commands. Now you can send emails and schedule meetings, search the web for information, products, news and more, or search your desktop faster than ever by saying what you want. For example:

Type as fast as you talk: With Dragon, spoken words appear on the screen almost instantly, making speech a faster, more natural approach to connect with your PC. Most people speak about 120 words per minute, but type fewer than 40 words a minute. Dragon NaturallySpeaking lets users create documents and emails about three times faster than typing.

Cut the cord from the PC: Nuance will be offering selected Dragon NaturallySpeaking editions bundled with a Bluetooth headset to deliver a truly hands-free, untethered experience. The Bluetooth wireless headset gives users the freedom to move around near their computer while dictating. Selected editions also support a range of digital voice recorders enabling voice notes to be later converted to text with Dragon.

Dragon NaturallySpeaking 10 is also US Section 508 certified to cater for hands-free use of the PC for those with disabilities and to assist people with carpal tunnel syndrome or other repetitive stress injuries. Dragon NaturallySpeaking has been shown to reduce temporary labour costs and insurance premiums by reducing repetitive stress injuries and worker compensation claims.