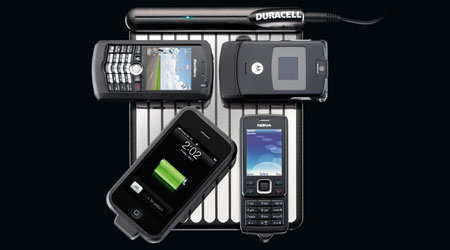 Charging pads are the next big thing in convenience: forget plugging in each of your devices to its own power pack, just drop them on the charge pad. Magnetic induction means your device can get juiced, but you won’t get shocked if you touch the pad.

Use of the myGrid does require a small modification to your handheld device, be it phone, GPS device or MP3 player. You need to put the device either inside a plastic sleeve (aka ‘Power Sleeve’), which has a connector built into it, or clip on a smaller module (‘Power Clip’).

While MP3 players, GPS devices and a wide range of mobile phone brands are supported in other markets, Duracell has made mobile phones the focusfor myGrid in Australia, providing sleeves for the iPhone (iPhone 4 will be supported soon) and various Blackberry models, and clip-on modules for Nokia phones, which vary more in shape and size. Once the clip or sleeve is attached, it’s then a simple matter of dropping the device onto the myGrid to recharge.

The myGrid pad itself consists of 12 metal strips that generate a magnetic charge. On the back of the adaptor or sleeve that goes on your device are four metal contacts, arranged so that, regardless of how you put the device on the pad, the contacts will meet two different strips. The circuit is linked, and charging begins.

The pad can generate 15 watts of power, which typically allows you to charge four devices at once. Duracell does warn that some devices are extra power-hungry, so if the pad is being asked for more than it can deliver, the power light will flash, letting you know that you need to remove something.

The myGrid certainly does what it claims: drop a device on the pad and it starts charging. Charge times are the same as if you’d plugged the device directly into its own adaptor.

We found we needed to be careful about how quickly we dropped and replaced on item on the grid. When we removed an iPhone 3GS from and dropped it again rapidly, for example, it would stop charging. Removing the device, checking the adaptor was seated securely in the iPhone’s socket, and then dropping it again saw charging recommence.

The main drawback of the myGrid is the $40 sleeves or adaptors you have to attach to your previously slim and beautiful devices. Battery manufacturers don’t have an international standard for these kinds of chargers, but with many pushing for integration of the metal contacts into handsets, this may change in the future. Until then, unpretty sleeves it is.

Still, those for whom handset aesthetics are unimportant will find the charge pad better than plugging in. It takes only one socket in your wall to charge four devices, but unlike the el-cheapo power boards that achieve the same, it banishes the spaghetti tangle of cables that attends those four devices as well as the need to fuss about with connectors each time you recharge. Which for most of us is every day.