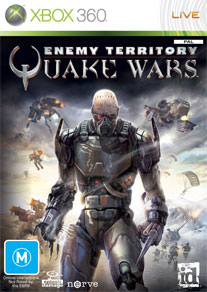 Despite its title, this is an Enemy Territory game, not a Quake game. If that, or the name ‘Wolfenstein’ doesn’t mean anything to you, you’re likely to enjoy this game a lot more than if it does, because Quake Wars’ success seems to rest a great deal on expectations.

If you’re a Quake aficionado, an expert at what they used to call a ‘twitch game’, used to playing a first-person shooter where fast reactions and a ‘back of your hand’ knowledge of the maps are most likely to ensure you prevail, this game might leave you scratching your head in bewilderment with your thoughts quickly turning towards a trade-in. If, however, you just like a ‘run-and-gun’ shooter where you want to run around a map and blast everything in sight, this will be much more your cup of tea. Cast all ‘Quake’ associations from your mind and look instead at what this game can offer.

The game has four campaigns, each with three missions in a row played in equally sparse, dreary brown-coloured environments, and it’s campaign that is the ‘meat’ of the game – only online, not offline. The Enemy Territory format is a team affair, encouraging teamwork to get the job done and win the day, with your fellow humans. That last point is important – if you’re not hooked up to Xbox Live (we reviewed the Xbox 360 version), don’t bother with Quake Wars, because while there is the option to play against ‘bots’ (computer-controlled characters meant to give you a decent fight) if you play offline and alone, the experience is lacklustre. The only way to play is online, with a bunch of friends and then the game really comes into its own. Good, concerted and co-ordinated team play, making tactical use of the great collection of weapons and vehicles – the bad guys’ vehicles are much more fun, by the way – is the way to get the most out of what’s on offer.

So the manual describes the single rule of play as ‘one team assaults while the other defends’ and that pretty neatly sums the entire game up. Quake Wars on console is not pretty, it’s technically flawed, it’s very repetitive and it does nothing whatsoever to further the genre. But just saddle up and get yourself out there, into the thick of the action and Quake Wars will provide you with hours of mindless fun – so long as, important caveat here, the online community gets behind the game and provides the necessary bodies. With the likes of Battlefield: Bad Company following soon, however, that’s far from a given.

This game was reviewed on an Xbox 360 console. The game is also available for PlayStation 3.