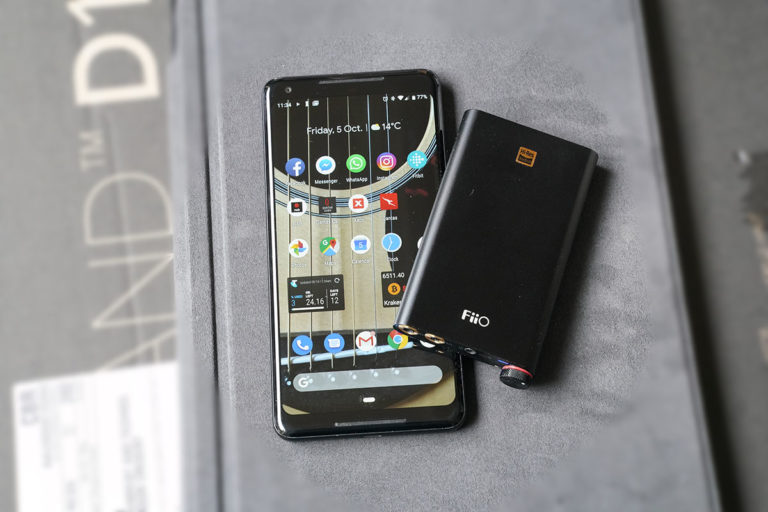 Audiophile quality is available anywhere you go with the right kind of attachment for your phone or computer. Which brings me to the FiiO Q1-II (aka FiiO Q1 Mark 2).

In addition, the device has a built-in 1800mAh rechargeable Lithium Ion battery, allowing it to power its own functions when used with certain portable devices. If you plug the unit into a computer, it will draw power from the computer to charge up the battery. But if you plug it into an iPhone, it will recognise the connection and use its own internal power, avoiding a draw on the phone. It’s not clear what happens with an Android phone, although I expect it would be like the iPhone. FiiO says that with a full charge, the internal battery will last for 20 hours with analogue inputs and 10 hours when its used as a DAC.

Typically you will use the digital input to feed music to the FiiO Q1- II. This is via a Micro-B USB connection on the bottom of the FiiO Q1-II. Included with the unit is a standard USB Type-A to Micro-B USB cable, suitable for connecting the unit to either a Windows or Mac computer. The unit can also be charged up using this cable (whether from a computer or a standard USB power supply). Also included is a short Apple Lightening to Micro-B USB cable. This is to allow use with an iPhone or an iPad. The unit will also work with Android devices which support the On-The-Go standard for their connectors. No cable is included for this.

Why, yes. Yes, it does. Despite the fact that it weighs just a smidgeon over 100 grams and is only 100mm long on the longest dimension, the clear intention of the FiiO Q1-II is to allow you to enjoy high quality audio while you’re on the road. So it supports PCM audio in 16, 24 or even 32 bits at sampling frequencies from the CD-standard 44.1kHz all the way up to 384kHz. Plus it supports Direct Stream Digital in SACD-standard 2.8MHz sampling, but also double and quadruple speed DSD, aka DSD128 and DSD256 (or 5.6MHz and 11.2MHz bitstreams). A green LED lights up to indicate DSD signals.

On one end are the analogue audio connections. One of the sockets is for a standard 3.5mm headphone. Next to that is a 2.5mm, 4-pole socket for balanced headphones. The latter is rated to support headphones with impedances from 16 to 150 ohms. No impedance specification is given for the standard output. But it is rated at capable of delivering more than 75mW into 32-ohm loads. The balanced output is rated at 220mW into the same load.

Next to the balanced output is another 3.5mm socket. This acts as both line input and line output.

Yes, Windows 10 now supports USB Audio Class 2.0, which is required for the FiiO Q1-II. (USB Audio Class 1.0 tops out at 96kHz, 24 bits). But clearly there was some incompatibility there. The sound was horrible.  So I downloaded the FiiO USB DAC driver from the company’s website and installed that on my Windows computer. Soon I had DSD and high resolution PCM up to 384kHz working fine.

Such things aren’t required for iPhones and Macs. With these it was a straightforward plug and play. Likewise for Android phones and devices, although you’ll need to supply your own cable. As it happens, I have both Micro-B USB to Micro-B USB, and Micro-B USB to USB Type-C cables, so I was able to test it on several Android devices successfully. I used the USB Audio Player PRO app on Android devices for high resolution and DSD. For iOS devices I used the Onkyo HF Player. The paid version of this can stream high resolution audio, including DSD, to external DACs.

I also tried an iPod Nano of the last generation before they were discontinued. I couldn’t get any sound out of that, but they’ve always been pretty iffy with external DACs.

So, first things first: yes, this DAC worked with all the PCM and DSD files I had available. That included high resolution FLAC music at up to 352.4KHz and 24 bits (the software in your device handles the decoding to PCM, the FiiO does the DAC duties), and Direct Stream Digital at standard, double and quad speeds (otherwise known as DSD64, DSD128 and DSD256). The various pieces of player software inform me both of the source file format and what they’re actually delivering to the DAC, so I know that there was no PCM conversion with DSD, and this was confirmed by the indicator light on the unit.

I had no balanced headphones available. Instead I switched around between Oppo PM-3 headphones, twenty-year-old Sennheiser HD 535 headphones (which I still love) and Blue Lola headphones. The first and last are closed back. The Sennheisers are open back. They are also rather inefficient and have an impedance of 150 ohms. If there are output level problems, these headphones will disclose it.

But they didn’t. I was able to play everything at any level I wanted, even at uncomfortably high levels, with these headphones. You will need strange headphones indeed to run out of oomph with the FiiO Q1-II DAC.

Listening through the FiiO Q1-II

As I’m writing this, I’m listening to music recorded six decades ago: “So What” from Kind of Blue by Miles Davis. The format is DSD64 – this recording has been out on SACD for many years since Sony has managed to convince itself that DSD is some kind of archival format. (I have problems with claims for DSD superiority.)

If I recall correctly, it was recorded on three track analogue tape. The tape hiss dates it a little – this being pre-Dolby – but there is a lively, uncompressed feeling to the recording. That cymbal, relentlessly sounding at 45 degrees to the right of straight ahead, the drums, the guitar. All are gorgeously layered in a space that exhibits remarkable depth, even though I’m listening through headphones. The music is on a 256GB microSD card plugged into my computer. The Foobar 2000 music playing software, with suitable plug-ins, is feeding this to the FiiO Q1-II DAC directly in DSD format.

That card doesn’t have any super high resolution DSD on it, so I’ve just switched over to a Google Pixel 2 XL phone. USB Audio Player PRO is streaming some DSD256 music from the NAS server on my network straight to this DAC, which is decoding it beautifully.

The sound is clean, clear, and when using the Sennheiser headphones, airy and open.

How about regular resolution music?

But I did most of my listening to music encoded to the CD standard 44.1kHz, 16-bit standard for the obvious reason that that is how most music comes. Holly Cole’s album Temptation was richly handled, with powerful bass, yet fine control on such material as “Train Song”. Even on the HD 535 headphones, the bass was full, but the Blue Lola headphones it was provided with a near-subwoofer quality.

Yet the subtleties in Cole’s voice remained evident. A little tape hiss was present in the recording, easily heard. The ring of chimes bounced across an internal sound stage with subtlety and beauty.

Really, it didn’t matter what I was playing, from 1970s pop through my favourite progressive rock albums to Beethoven’s 7th symphony or his “Appassionata” piano sonata, there simply wasn’t anything to distinguish the FiiO Q1-II from multi-thousand-dollar DACs.

Even though the little volume control turns smoothly, without indentations, it appears to operate digitally. Most of the time it changed the level in 0.5dB steps. The maximum line output level was 1.58 volts RMS. That’s a little less that than from a standard CD player, but not much less; only two decibels. The line output is subject to volume control of the FiiO Q1-II. There’s no fixed output setting.

There are few headphones that this unit won’t drive comfortably. I did all my headphone listening with the standard headphone output, not the balanced output. The headphone output drove 300 ohm loads at the maximum output setting without clipping and produced 1.5 volts. That works out to 7.6 milliwatts, or 8.8dB above the (1mW) sensitivity rating of any high impedance headphones you’re using.

With a 16 ohm load the output from the full-scale sine waves clipped a little at the two highest volume settings, but all was fine at 1.2 volts output. That translates to 90mW (higher than the 75mW claim), or 19.6dB above the headphone sensitivity ratings. Given that most low impedance headphones and earphones are rated at well above 100dB for 1mW input, thunderous levels are clearly available.

I calculated the internal impedance of the headphone output to be less than 2.2 ohms, so even with low impedance headphones with which the impedance varies by frequency, the effect on the response should be minimal.

With 44.1kHz 16-bit inputs, the output was even to just on 20,000 hertz and dropped away sharply above that. For 96kHz inputs, the response was maintained out to 43kHz before cutting off sharply. With 192kHz inputs, the measuring rig was at least as much the limiting factor. Adjusting for that ADC’s effect, the output reached 63kHz at -2dB, and 75kHz at -3dB.

Some noise delivered to the DAC via the USB socket breaks through into the analogue output. Using a 0dBFS level 1kHz sine wave, output via the headphone socket into a high impedance at maximum volume, the noise floor was at -132dB or better for most of the audible band, with a small bump to -129dB around 7kHz. That’s when the Windows computer was running from its battery. When the computer was plugged into power, the noise floor below 1kHz hovered slightly above -123dB, with what at first glance look like mains frequency spikes reaching up to -105dB. I say “at first glance” because when I checked the spikes, I found that they were at 60 hertz and its multiples, not the expected 50 hertz. I guarantee I was in Australia when doing this measurement! There’s also a fair bit of spurious noise above 1kHz.

Note: none of that was audible.

Despite its considerable capabilities and excellent performance, the FiiO Q1-II costs well under $200. Yet it challenges the performance and signal versatility of audiophile DACs costing an order of magnitude more. Audiophile quality is now within reach of most of us. And it’s in a package so light you can carry it with you anywhere.

You can purchase the FiiO Q1-II here.

Features
Value for money
Performance
Ease of use
Design
Positives
Supports virtually all PCM and DSD signals
Amazing value for money
Great sound for just about all headphones
Negatives
4.9