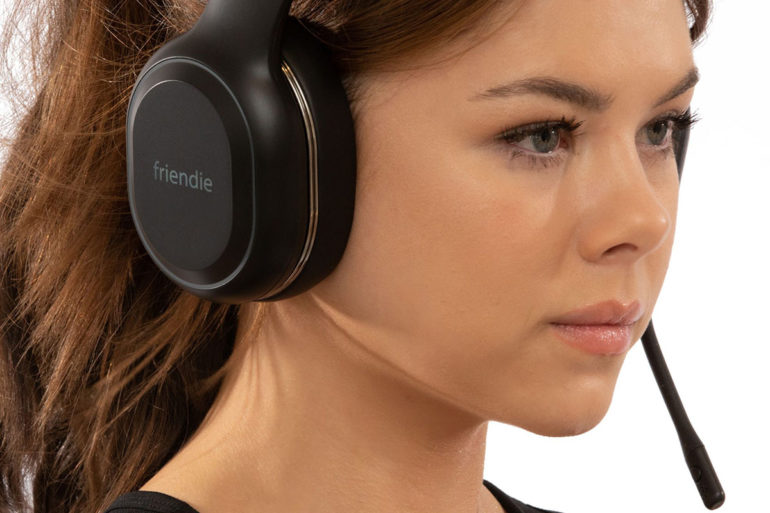 I’d never actually heard of Friendie before receiving a press release about the new Friendie AirDuo headphones. It turns out that Friendie is an Australian firm. These Bluetooth headphones are one of several models it has available, including in-ear units, “Audio Sunglasses” and Bluetooth speakers.

I confess, I was a little leery about checking out these headphones. We get a lot of press releases by seemingly fly-by-night outfits. But when I realised that its products were carried by the likes of Myer and Amazon, I figured it was a legit brand.

And, yes, that is what it turned out to be.

So, what we have here in the Friendie AirDuo headphones is what at first seemed to be regular Bluetooth headphones. Well, they were that, plus a bit more.

First off, they have a rated “Music Playback” time of 54 hours – that’s a bit more than two days. That’s at 50% volume, which seems to be increasingly the standard for measuring such things. The capacity of the battery is 1,000mAh.

The “Duo” in the title refers to the two microphone options. As is usually the case, these headphones include built-in microphones. But they include a “boom” microphone, a mic-on-an-arm that plugs into one of the earcups. This is intended to deliver better audio quality when you’re talking on the phone.

Included with the headphones is a lightweight, but fairly effective, semi-hard travel case, a charge cable, the plug-in boom microphone and an analogue cable so you can use the headphones even if the batteries do run out.

The Bluetooth connection would seem to be limited to the SBC codec, or so my phone reports. The specifications say that the Friendie AirDuo headphones use Bluetooth version 4.2. They have 40mm drivers with Neodymium magnets (actually, as the specs say, a Neodymium alloy with iron and boron).

Each earpiece also contains a 30mm “vibration unit” which is intended “for gaming or super deep bass boost for music”.  You can switch this on or off with a hardwired switch. They each also have LED lighting which gradually shifts colour between through blue-white, green and purple, verging on red. This comes through the “friendie” brand name on each earcup as well as a thin ring near the circumference of each cup. This is actually rather more tastefully presented than it sounds, but in any case, you can switch it off. The review headphones were finished in black, but a kind of metallic pink is also available.

There are also two EQ settings: “Chart” and “Bass Enhancer”.

Pairing the headphones was straightforward the first time since they are in pair mode when you switch them on. Since no special codec support is promised by these headphones, I paired them to a Microsoft Surface Pro rather than my regular phone. Pairing proceeded easily and smoothly.

Later when I wanted to switch them to my phone, I consulted the slim manual to see how to put the headphones back into pairing mode. But it didn’t say how to. I tried a couple of things, like holding down the power button for a long time, but none of that worked. In the end, I just used the “Disconnect” button in the computer’s settings, whereupon the headphones went into pairing mode.

But back to the computer. I fired up TIDAL and started playing some music. That “30mm vibration mode for gaming or super deep bass boost” seemed intriguing, so I dialled up some Billie Eilish to check out the high levels of bass on her album. After switching it on and off over quite a period, I remained undecided on this function. It actually did manage to produce closer to the effect of a really extended bass response that you might enjoy with a fine speaker/subwoofer system. It broadened the bass sense out of the ears into at least a part of my body. That part was around my ears, onto the sides of my head. It truly enhanced the sense of deep bass.

But it also … um … tickled. The physical movement of this driver produced a sensation of movement. Yes, it enhanced the apparent depth and strength of the deep bass, but that tickling was distracting.

In the end I decided to leave the 30mm vibration mode off. That was largely because the Friendie AirDuo headphones didn’t really need much in the way of bass enhancement. Eilish’s stuff was very solid into the deep bass without any of that.

The sound delivered by the Friendie AirDuo Bluetooth headphones was smooth, musical and utterly unobjectionable. By that last word I mean that there were no nasty high frequency peaks. Not to say that the higher frequencies were unnecessarily held back. In recordings in which the treble is a bit nasty, the headphones transparently reveal that nastiness. Perhaps not coincidentally, this became obvious in the Charles Manson-penned track (yes, that Charles Manson) “Never Learn Not To Love” on The Beach Boys’ 1969 album 20/20. (Manson’s own version under the title “Cease to Exist” on his 1970 album Lie: The Love and the Terror Cult, is rather better.)

But for properly recorded music, the sound was good, if leaning a little toward inoffensiveness. Right now, for example, I’m enjoying Genesis’ second (pre-Phil Collins) album, Trespass. All the instruments are clear, with the cymbals shimmering properly and Peter Gabriel’s words nicely comprehensible. The bite on such tracks as “Knife” comes through well and there’s plenty of volume available.

It’s easy to use the boom microphone – just plug it in and it takes over duties from the built-in microphone. The reason I first paired them with the Surface Pro rather than my phone was so that I could easily record audio from the headphones, using both microphone states. Far better to check them out that way that than me asking people to whom I’m speaking to tell me how I sounded and reporting that to you. And it allows me to provide the recordings for you to listen for yourself.

So, here’s a brief clip of me talking using the built-in microphones:

And this one’s using the boom microphone:

Neither are exactly high fidelity, but the boom microphone definitely provides a cleaner sound than the other.

The Friendie AirDuo headphones were a comfortable wear. They entirely encompassed my ears, with sufficient space so that they weren’t too crampy. The grip on my head was fairly light and the padding was soft.

The Bluetooth connection was generally very solid out to a range of fifteen metres.

The Friendie AirDuo are decent sounding and practical Bluetooth headphones. If you are on the phone at work a lot, and want music in between calls, then the boom microphone is a useful addition.

You can read about other Bluetooth headphones we’ve covered here.