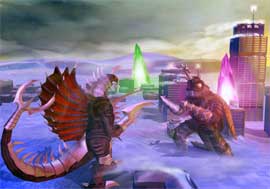 Atari have announced the further growth of one of its long-running publishing franchises with the news that Godzilla®: Unleashed, the ultimate giant monster fighting game, is in development for the PlayStation®2 computer entertainment system in addition to Wii and Nintendo DS?.  Developed by Pipeworks, Godzilla: Unleashed is scheduled for a simultaneous spring 2007 release on all three platforms.

Godzilla: Unleashed is a fighting game on a giant scale, starring the legendary Godzilla and a host of more than 20 of the most renowned monsters of all-time.  Players are challenged to save the planet from mayhem and destruction, but not before causing some of their own.

The character line-up on the PlayStation 2 features new monsters not found on the Wii and DS versions of the game.  Players will fight more than 20 monsters, with the newcomers taking their place amongst the familiar faces from past Godzilla video games.  Godzilla: Unleashed features an innovative non-linear storyline which lets players influence how the story unfolds through their choices in battle, and a flexible multiplayer mode which supports up to four players for the ultimate city-crushing monster mash.