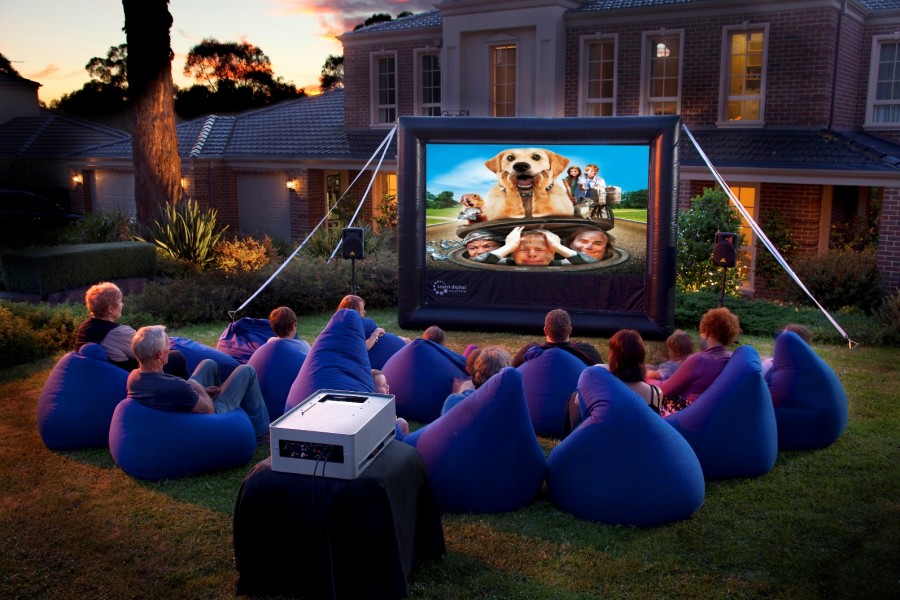 When your idea of “outdoor entertaining” is more Bear Grylls than BBQs and bug zappers, the HandiTheatre will inject some excitement back into the backyard this summer.

The system comprises an inflatable “HandiScreen” projection screen, a pair of powered speakers with stands, a projector, Blu-ray player and preamp. All the items pack down into three separate wheeled cases, which while far from compact, are portable enough to pop into the back of the car, according to the distributor, Smart Digital. Take the kit on your next weekend getaway and it’s a sure thing you’ll have the biggest TV in the caravan park.

The screens are available in 3 metre ($3998) and 2.5 metre ($3498) diagonals, so provide a gargantuan picture next to that 55 inch LED telly you dropped a couple of grand on last Xmas. The screens are also made of theatrical fabric, rather than plastic, so provide the proper reflective qualities you want in a projection surface, helping to provide a picture with even levels of brightness and colour saturation.

The supplied mains and DC powered pump inflates the screen in around three minutes, with total setup up time reckoned by Smart Digital at around half an hour. The screen is anchored via rope ties, and measuring around 1.5 metres deep and 2 metres, needs to be installed in a decent sized space; one that allows at least three metres from the audience seating to the screen.

The Blu-ray player is by Samsung and, integrating a digital TV tuner, means your patch of Buffalo grass can play host to an entirely new kind of backyard cricket when the Tests and Twenty-20s resume in February.

With full HD 1080p video supported by the source equipment, it’s a shame, however, that the projector offers only 1280 x 800 pixels (720p). The HandiTheatre’s super-large screen would also benefit from the extra picture detail offered by a higher resolution projector, but bearing the Optoma badge, the projector is merited with good image credentials.

A set of composite video ports allows the connection of other sources, providing standard definition video from camcorders and games consoles should you want to share home movies and motion gaming action with friends and neighbours over the coming weekends.