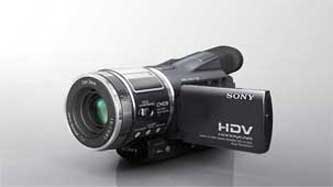 Sony has scored a real coup with its new HC1. The camcorder has become incredibly popular amongst a broad range of videomakers. I have fielded calls from a wide variety of users, those who are now exchanging an old analogue camcorder for their first digital one through to seasoned professionals keen to record footage in difficult situations in HD.

Anecdotally too, a number of retailers have expressed their surprise that the moderately expensive HC1 has proven to be so popular. There appears to be two drivers to this phenomenon. The first is that quite a few Australians have been bitten by the HD (High Definition) bug, they are buying HD plasma and LCD TVs. HDTV, home theatre and a general regard for higher quality recording is seeing people opt for a camcorder that delivers the highest quality pictures possible. The second is that many videomakers see the new HDV format as a way of future proofing their camcorder purchase.

Sony has been excellent at picking consumer moods in the past and their domination of the HD market in both the consumer and semi-professional areas has shown an impeccable understanding of the market and consumer?s desires when it comes to camcorder video.

The much larger HDR-FX1 consumer HDV model and its more professional cousin, the HVR-Z1P are extremely popular prosumer through to professional videomaker camcorders and have even started turning up on shoots of a number of TV programs.

The amazing thing is that once you have seen the output from the HC1 on a HDTV there is simply no going back to Standard Definition. Viewing the native 1080i video on an HDTV drives home how much resolution we?re missing on standard DV; when the HC1 is sharp, it?s very, very sharp. So if you plan to view your videos solely on an HDTV via a FireWire or Component connection and want the sharpest picture possible, this is most definitely your camcorder.

The HDR-HC1 incorporates the new HDV (High Definition Video) format developed for consumer and prosumer camcorders. The HC1 is the first single chip ? (Sony has deployed a 8.4mm (1/3 inch) CMOS [Complementary Metal-Oxide Semiconductor] imaging chip) capable of recording in both the 16 x 9 1080i HDV and standard 4 x 3 (or 16 x 9) DV (Digital Video) formats, and uses miniDV tape for recording in both formats. The effective pixels of the CMOS chip in the HC1 are 1.9 megapixels in HDV mode and 1.46 megapixels in standard DV mode.

The HC1 has both HD-component and iLink outputs for full 1080i playback, but has a down conversion function for HDV playback on standard resolution televisions or when copying to a DVD or VHS tape.

Sony has deployed a Carl Zeiss Vario-Sonnar T* fixed lens. You can add accessory lenses, but the primary lens cannot be removed. The lens features a 10x optical zoom with a focal length of 41 – 480mm in 16 x 9 mode, and 50 – 590mm in 4×3 mode. The lens can be focused manually or automatically, and focus ring is provided just behind the lens assembly on the camcorder exterior. The focus ring can also be switched and used as a zoom ring as well, although there is a standard finger-style zoom control at the rear of the camcorder.

As you might expect from a camcorder that delivers great HD images, the HC1 has both auto and manual controls for focus, exposure, white balance, shutter speed, color shift, and sharpness. However, the HC1 is missing a manual video gain control, which would be desirable in difficult lighting situations. Add to this Picture Effects, Fader Control, Shot Transition Mode, and Cinematic Effect, which approximates a 24fps film look, and you have a heavy arsenal of control which is unexpected in such a diminutive camcorder.

You can select among automatic, manual, or spot focus. The Expanded Focus button enlarges the centre of the scene for easier manual focusing, and the Tele Macro button will defocus the background to bring out the subject.

A professional zebra-stripe overexposure display and a live histogram supplement exposure options, and for low-light shooting, you can turn to Sony?s infrared NightShot mode and Super NightShot, which uses infrared and the built-in video light.

The HC1 uses a 16 x 9 high-resolution colour eyepiece viewfinder, as well as a 16 x 9 6.86 cm (2.7 inch) flip-out LCD screen. Like other Sony camcorders, the LCD screen also serves as menu touch screen from which the user can access many of the manual shooting functions, as well as the unit?s playback functions. This feature eliminates ?button clutter? on the camcorder exterior.

Along with the extensive video recording options of the HC1, the camcorder also has quite good audio options for a consumer camcorder. It is equipped with an on-board stereo microphone, but can accept an external microphone as well. In addition, the audio input levels can be adjusted manually via the LCD touch screen menu. You can also monitor the audio level of your recording via headphones. Audio is recorded in 16bit (CD quality) in HDV, or alternatively, 16bit or 12bit when recording in DV.

HDV files can be edited on a PC with HDV compatible software, down converted, and then burned to DVD. When high definition recordable DVD (Blu-Ray) becomes available, you will be able to copy and play your footage back in full HD resolution without having to plug in the camcorder.

The HC1 is a dream to use in the field. Using the camcorder in a variety of situations delivered consistently good images with tremendous depth and clarity in the captured video. It would not be a stretch to declare this the best single chip camcorder on the market in terms of its overall picture performance.

The footage gathered in a range of situations from indoors to outdoor scenes delivered extremely sharp, clear and well defined video ? especially when viewed on an HD screen. The video produced from the HC1 is just gorgeous. In our tests the camcorder showed very little picture noise, even in low light conditions, with little picture bleed when recording saturated colour.

However, what the HC1 gains in sharpness it sacrifices to some extent in the video?s dynamic range and chroma accuracy in some situations. Colours could be slightly over-saturated and seem to be less than ideal when viewed on an HDTV, and then under-saturated and mildly inaccurate when down converted and digitised. But, to be fair this was the single chink in the HC1?s picture performance.

Considering its CMOS imaging chip, the camcorder performs extremely well in normal light and very well in low light. In addition, the image is about three times sharper, with three times more pixels than a MiniDV picture.

Like many consumer auto focus systems, we found that the HC1 has some difficulty finding focus in low light and can ?hunt? a little. Auto focus works relatively well in better lighting conditions, with focus found quickly and easily.

Of course comparisons will be made, fairly or unfairly, between the HC1 and the other HDV camcorders, especially from a performance perspective. Sure, the HDR-FX1 performs much better, though that is to be expected. The HDR-FX1 uses a 3CCD system compared to the HDR-HC1?s single CMOS chip.

The HDR-FX1 is really for a different market than the HC1. A wedding videographer or an independent filmmaker will love the HDR-FX1 for its high level of manual control and amazing picture quality, but a consumer would hate it for its lack of portability. It would be unrealistic, for example, to take the HDR-FX1 on a trip, whereas the HC1 is the perfect HD travel companion.

The HC1 is a clear commitment by Sony to the HDV format. While the company launched the format with semi-pro and prosumer models, it has clearly moved the format into the mass market with the HC1. The point is that the acceptance of HDV will come from the consumer range of camcorders and their acceptance by the mum and dad videomakers. Sony has fulfilled the promise made by the HDV team back at the launch of the FX1, that there would be a consumer-level HDV camcorder within 12 months, and that is exactly what has transpired.