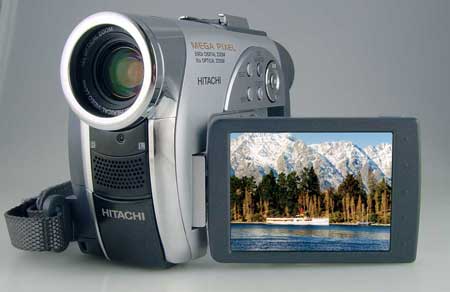 Hitachi’s latest camcorder is visually stunning and at 500 grams, is among the lightest camcorders ever made. It boasts both 4:3 and 16:9 recording modes; but will its reliance on DVD-RAM spell trouble for the end user? David Williams investigates.

The Hitachi is a tiny – but solidly built – 8 cm DVD-RAM/DVD-R digital video camera. Aesthetically, it is very stylish and its extreme lightweight is far, far removed from its VHS ancestors. At such a compact size, it is effortless to carry around and have on hand at all times. This camcorder is sure to hold appeal for a wide market.

The use of portable DVD media makes it a no-brainer to load, and completely eliminates the fear of accidentally taping over previous, and possibly precious recordings. The camera will locate free space without the need to rewind or fast forward to a new start-point. Each individual recording session is saved as its own clip and can be easily recalled for playback at any time. If DVD-RAM media is used, scenes can also be edited in-camera, which I?ll address in more detail a little later.

The entire right-hand side of the camera is the 8 cm DVD tray. To the left we have the control centre, with menu and function buttons as well as the flip out LCD screen, which delivers a nice, crisp image. Comprehensive status information is unobtrusively detailed around the edge, although this can be toggled on and off. The LCD can also, conveniently rotate, to allow for self-filming.

The main control wheel sits within easy reach of the right thumb, however, single-handed operation is easier said than done. A tiny button on the edge of the wheel must be pressed for it to rotate – yet trying to achieve this while rotating the wheel with one thumb is an exercise in dexterity best left to those with multiple finger joints. By contrast, the recording toggle – situated right in the middle of the wheel – is a snap to turn operate. Another curious feature of this wheel is a tiny lever that can ‘lock’ the control such that still picture mode cannot be selected. Yet, this lock does not stop the wheel rotating in general – it’s still possible to move from video recording to off; its sole purpose is just to prohibit selecting still picture mode.

Firewire (to A/V or S-Video), USB and microphone-in ports are hidden behind a discrete hatch in the front of the camera. Above, a shoe for an optional flash and the zoom lever can be found, and underneath a facility for a tripod shoe.

Menu information is presented in a direct, easily-accessible manner. Users can find with the mere click of a button how much space remains, in not one, but three quality formats – XTRA, Fine and STD – as well as the remaining capacity for photos. In addition to the traditional menu button, the DZ-MV780E also has a quick menu button, which quickly and easily retrieves the most common features and options. This will undoubtedly be a godsend for camcorder novices.

One of the greatest features (and curses, see later!) of this camera is its use of the now-ubiquitous DVD media. Even the most technologically-challenged will be familiar with DVDs in this day and age. Being a random-access format, DVDs can be inserted and recorded on (provided space remains) without any need to cue the disc. Individual recording sessions are saved as distinct clips, and any clip can be replayed at any given time. The disc navigation menu displays handy thumbnails of each clip for faster, easier identification. By default, this will be the first image in the scene, but can be customised to be more meaningful to the shooter.

DVD makes the process from recording to playback as versatile as the user’s abilities permit. A disc can be inserted, recorded on over time, and then played as-is in a conventional DVD player. The disc cannot be reused however – which is where DVD-RAM comes in. If DVD-RAM is used, the disc can be edited in-camera allowing clips to be over-written or trimmed or re-ordered with a variety of transition effects applied between scenes. Hitachi alleges DVD-RAM discs can be rewritten up to 100,000 times (and I’ll take their word on this; I did not verify by testing!).

Unfortunately, the necessary 8 cm discs do not hold a vast amount of data (though still at least twice as much as CD). A single-sided disc holds 1.4Gb and a double-sided disc 2.8Gb. That’s a reasonable trade-off considering the disc size essentially controls the size of the camera; using 8 cm discs, this gadget fits neatly in the palm and can be held for long periods of time without weight ever becoming an adverse issue.

It is this in-disc editing which really makes this camera stand out from the crowd, and separates it from the tape-media based models. The editing is straightforward and really very effortless with easily-navigated on-screen menus. It’s the sort of camera I could definitely recommend to my father, or another technologically-challenged sort, with full confidence and good faith!

However, if DVD-RAM discs are used, it is important to note they cannot be played on a conventional DVD player (including computer DVD drives) without being ‘finalised’. This is a camera function which alters the disc structure and converts it to a regular DVD format. Once the disc has been finalised it can no longer be edited or recorded onto, but it can be played back without the camera. Obviously, the upshot of this is that the camera has to be used to preview footage on a television, if the user is not yet ready to finalise the disc.

Now, all that said, the finalisation process sounds straightforward enough. But there is a catch: the finalise menu option does not appear if the camera is using its battery; the DZ-MV780E will only allow a disc to be finalised if it is plugged into a mains power supply. However, much to my dismay, even then this option did not appear. This is a true story; perhaps the review camera had an out-of-date firmware, or perhaps it needs the battery to be left off for some time before being plugged in to mains power. The manual certainly gave no caveats and so, unfortunately for me, finalisation remained an unassailable mystery.

The accompanying software CD provides a DVD-RAM driver for Windows PCs, but this did not permit the disc to be accessed via DVD drive. All was not lost: the disc is readable by connecting the camera to a PC via USB. This gives many options: the contents can be file copied with Windows Explorer. Still photos are saved as JPG images, making them easy enough to access. Movie files are stored as a single VOR file. These can be opened in any DVD playing software (which treats them as a .VOB, with no recognition of scene breaks). Alternatively, the software provided by Hitachi can open the files, recognising them properly. Finally, TMPGEnc and other freely available programs can convert the file to other video formats, and demux its audio and video streams. Of course, this then ruins the entire ‘no computer needed’ aspect of the camera.

By copying the video files, I could reformat – and reuse – the disc. This does allow the one disc to be constantly reused, but really, if the problems with finalising the disc are going to be a common experience for all users, then DVD-RAM is a big dud, in my opinion, and the camera loses all its built-in editing advantages. Hopefully Hitachi will investigate this.

This camera is a delight to have and hold and to operate. The viewfinder gives a crisp image, whether outside in bright sunlight or inside at night under artificial lighting. Happily, the camera compensates for hand shake which is exaggerated by the camera’s tiny centre of gravity – it would take a very steady hand (or preferably, a tripod) to capture truly wobble-free shots.

The optical zoom gives clarity while keeping a distance. This was helpful in my attempts to use the camera to lay out a remake of the classic ‘Tales from the riverbank’ starring my son’s guinea pigs. The ‘actors’ rejected my direction and would scamper into hiding whenever I came near, thus necessitating long-distance filming.

I do have three grievances with the camera. Firstly, the battery charger doubles as the transformer for the A/C input into the camera, but only provides either/or functionality. It is not possible to simultaneously charge the battery and use A/C power to operate the camera. This is simply not satisfactory. That said, the battery does not take a particularly long time to charge. Although, it doesn’t take an especially long time to discharge either – less than 40 minutes of use.

Secondly, taking pictures onto DVD has too long a gap between being able to take photos, in the order of several seconds. How many precious memories will be lost while the camera regains its bearings?

Thirdly, when the camera is connected via USB, it completely freezes all its own controls, even including the off switch. Until the USB cable is unplugged, the camera is mindless.

I?m hopeful the problem with finalising the disc was a one-off, either something peculiar to the review device or perhaps just basic ignorant user error on my part. Had it worked as expected, by a single menu option, this camera would be an unbeatable winner suiting both the semi-professional and the home user without a computer. It is a beautiful camera and its concepts are theoretically tremendous.