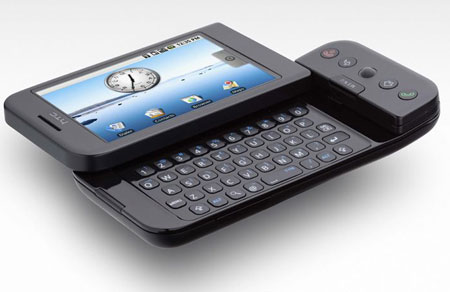 HTC’s Dream merges the generally excellent Google-backed “Android” phone operating system with a handset that is in many respects rather average. The result is still an enticing phone, but we can’t help but think that future Android-based offerings might be even better value. At last the iPhone 3G has some serious competition.

The HTC Dream (also known as the Android G1 internationally) is a combination touchscreen and keyboard based smartphone with a sideways sliding mechanism that reveals the QWERTY keyboard and switches the phone into landscape orientation. The front face sports a menu button, calling, home and return key and a trackball for navigation. In order to incorporate the keyboard, the base of the phone juts out at a distinctly weird angle, making this a phone that’s definitely more about function than form. You might wow your tech geek friends with it, but fashionistas will wonder why you’re carrying a phone from 1998.

At a technical level, the Dream is a 3G handset running on the 2100Mhz frequency – our review sample was an Optus model, and they’re the launch partner for the phone, but it’s not exclusive to Optus. WiFi is supported, as is Bluetooth, but in common with the iPhone 3G, Bluetooth stereo is conspicuous by its absence. It’s equipped with a GPS, but like the iPhone, mapping is provided by Google Maps, so you’ll need to have a data connection active to make use of it. Storage is an incredibly small 256MB onboard, but it’s microSD compatible, so you can punch up the storage pretty easily.

The hardware only tells part of the story, however. The Dream is the first phone launched in Australia to run Google’s Android operating system. Android has a number of interesting features that push it ahead of the pack. It shouldn’t come as a big surprise that Google’s own applications feature strongly, which makes it easy to search, check Google Mail, Maps and so on – but the open nature of Google’s answer to Apple’s App store, “Market” features applications of pretty much every type.

Google’s approach to Market is quite open, which means that applications that are yet to get much traction in the iPhone world – such as alternative browsers, VoIP clients and the like – are freely available. At the same time, Market doesn’t have the scope of applications that the App Store does, especially in multimedia and games. In our tests, we also hit a number of applications that were listed as “free” that repeatedly failed to download; we’re still not sure why.

One of Android’s neatest operating system features is the notification bar, which works like a pull-down blind, in essence. When you get a new notification (a new mail, incoming twitter tweets, or even just an application finishing installation) an icon will appear in the top bar. A quick swipe of the finger pulls the shade down, revealing the full details and allowing you to easily switch to the relevant application if it’s of interest to you.

Android’s an interesting operating system; leaving aside the philosophical argument over its Open Source nature, it’s also a curious mix of desktop PC metaphors and phone ones. Applications can be brought up en masse from a menu screen, or dragged to separate window spaces, and the easy availability of Apps from the Market makes it simple to set up the Dream to your own specifications. We found the in-built browser a little underwhelming, but quickly replaced it with the excellent Opera Mobile, for example. The notification system is excellent and unobtrusive, and it highlights the multi-tasking nature of most of Android’s applications. Whereas with the iPhone you’re basically limited to one non-Apple application running at a time, Android adroitly manages multiple application notifications with grace.

There’s a mild downside to Android’s open structure, in that different programmers can use slightly different approaches to applications, especially when closing them. Some applications feature a close dialog; others don’t, as Android’s meant to manage memory dynamically for you, making a close dialog technically unnecessary. As it’s not a uniform approach, it can be confusing, and there’s a mild potential to use extra data when you’re not expecting to because minimised applications in the background may still be waiting for data packets.

On the hardware front things aren’t quite so rosy, however. At a basic level the Dream performs well, but for just about every task we were struck by odd little hardware limitations. The keyboard is functional but the keys don’t press down far, which can lead to mis-typing. Compared to the keyboard on, say, the Blackberry Bold, it’s quite ordinary. The sliding screen comes out with a rather brutal thump rather than a smooth action, and the curved nature of the phone makes it feel odd in a tight pants pocket. The touchscreen features vibrating haptic feedback – but not always – and the indication lights for some applications make it hard to work out when you have or haven’t selected some buttons. The Dream charges up from a mini USB port located on the base of the phone, and this also serves as the audio port. The practical effect of this? There’s no 3.5mm audio jack, making the Dream a middling choice for audiophiles.

Battery life is key for any phone, and in this regard the Dream is much like most 3G smartphones; with even moderate use you’ll drain it within a day, and there’s not much point having a Dream if you’re not going to use it extensively. Lighter use in our tests stretched it out to two days if you were very conservative in your usage.

There’s an obvious point of comparison between the Dream and Apple’s iPhone 3G, and having used both pretty extensively, we’re split between the two.

The iPhone is slicker and more polished, and does have more Apps at the present time. But it doesn’t have Android’s notification and multi-tasking system, and is more constrained in some application areas. Google does need to smarten up the operating system a bit to appeal to many phone user’s innate “ooh shiny” lust buttons – that’s an area the iPhone hits well – but there’s a lot of promise here.
Android, then, has a lot of promise, but it’s debatable whether the Dream is the right phone to showcase it. On a better designed (and arguably better looking) handset it could really fly and impress; on what they’re selling it doesn’t shine as well as it could.

The HTC Dream will go on sale on 16 February, 2009. Optus initially will be the only carrier to sell the phone, but this is not an exclusive arrangement, it is just a matter of the other providers configuring the Dream for their networks.

Optus has said that the phone will be sold on plans only; there will be no outright purchase option. There will be 4 plans, starting from $59 per month, plus handset costs. Including handset repayments and the Optus plan, that’s a minimum cost of $1776 over 2 years.