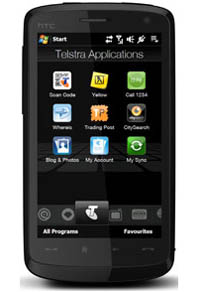 HTC’s latest stab at an iPhone-like, touch-based phone is mostly good fun, but the fact that it still hides Windows Mobile 6 behind the scenes means that you’re in for moments of frustration.

The HTC Touch HD is a Windows Mobile 6-based smartphone with all the features you’d expect out of a high-end phone, including WiFi, Bluetooth, HSDPA 3G Wireless and a rather large 3.8″ LCD display. The display is king here; not only it is impressively large, but its top resolution of 480×800 pixels makes it sharper and more detailed than any other smartphone in its class.

Our review sample was a pre-production model, and for whatever reason, we weren’t able to access the inbuilt GPS module for testing its GPS chops. HTC’s web site for the Touch HD does indicate that it features A-GPS (that’s assisted GPS, a system that uses mobile phone towers and data feeds for additional accuracy), but we’ve got to reserve judgement on how well this works, because ours, well, didn’t.

Like the ostensibly similar HTC Touch Diamond, the Touch HD uses HTC’s “TouchFlo 3D” interface, with lots of large icons and swift finger gestures to cover almost everything you’re likely to want to do with a smartphone. These are logically laid out in a revolving panel at the base of the Touch HD’s 3.8″ LCD display. Those wanting to play with multimedia files with the Touch HD will need to spend a little extra on a microSDHC card, however; the onboard 512MB of RAM is a bit paltry.

TouchFlo 3D is a really good idea; a way to get past the innate clunkiness (and all too often obstinacy) of the Windows Mobile Interface. Basic phone functions are a snap to use, and unlike the Touch Diamond, which had the habit of slowing down to a crawl intermittently, the Touch HD was snappy and responsive for most basic phone tasks.

We particularly liked the fact that HTC’s equipped the Touch HD with a regular 3.5 mm headphone jack, so you can use decent headphones with it when listening to music or watching video on the crisp display screen. We did find a large number of correctly rendered DivX and WMV files that the Touch HD simply wouldn’t play, which was annoying.

More annoying, though, were the few touchscreen applications that either required the stylus, or just dropped us back to the plain (and often frustrating) Windows Mobile interface. Typing is still a chore; despite the higher resolution, the onscreen keyboard is small and imprecise, especially compared (inevitably) against Apple’s iPhone 3G. Even resorting to digging out the stylus, we found entering the password for our WiFi network to be an exercise in pure frustration on the Touch HD, and SMS and email messages suffered the exact same fate. Windows Mobile’s interface comes as something of a shock when you do hit it, partly because it’s virtually impossible to navigate it without the stylus, and also because it’s notably slower and less friendly to navigate compared to TouchFlo 3D.

It feels harsh to rate the Touch HD down for what are ultimately Windows Mobile’s failings, but at the same time, the hardware is tied to the software, and it’s what you’re going to get if you invest in the Touch HD. As Windows Mobile phones go, it’s a very good example that effectively “hides” most of the OS problems, and if Windows Mobile is an environment you have to play in, then it’s recommended. Otherwise, we’d suggest either the Blackberry Bold or iPhone 3G as better overall smartphone units.