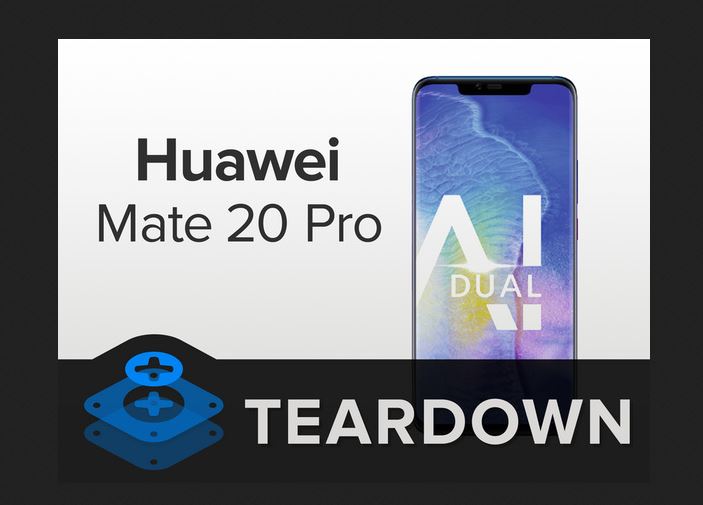 The Huawei Mate 20 Pro teardown is complete – iFixit declaring that it is the best phone Americans can’t buy. Fortunately, Aussies can because we are a trusting lot.

There were no major surprises inside (Mate 20 Pro teardown here) although iFixit did find what it calls the playfully calls the ‘rectangle of mystery’ chip on the camera module.

It seems Huawei has been listening to the right to repair movement because it lacks much of the gluggy, oozing mess of hot melt glue to hold it together. For that alone, it gets 4-out-of-10 for repairability. It is relatively easy to open the rear glass cover and remove layers of components.

The 538ppi OLED display maker is BOE and a second source from LG Display. The BOE panel appears to be superior in brightness, 100% DCI-P3 colour gamut and HDR10/+ but it can’t supply enough to meet the unprecedented global demand for the Mate 20 Pro.

It is the first smartphone to adopt Synaptics’ complete display system solution – which includes Synaptics’ flexible chip-on-film (COF) ClearView display driver and the company’s ClearPad touch controllers. Add to that is the in-glass optical fingerprint sensor by Goodix although it sits under the OLED plastic substrate and is repairable.

The future of Huawei smartphones

That is what Huawei needs for success – supply chain control. It designs the silicon (Kirin) and invests in its suppliers to obtain a rock-solid supply chain it needs to take on the ‘big’ guys. This has all come together now, with it taking Apple’s number two spot (units shipped).

Interestingly Motorola recently admitted to GadgetGuy that while its parent company Lenovo is one of the world’s largest PC makers and has enormous clout with PC component suppliers it simply could not guarantee to get enough supply of components it needs to launch more smartphone models.

BBK (OPPO, vivo, OnePlus, RealMe etc.) face similar issues and reportedly bought the entire initial production run of the premium mid-tier Qualcomm 660 SoC. This chip has most of the performance of last year’s Qualcomm 835 flagship. This gave it a real advantage over others forced to use the slower Qualcomm 635/636 or wait longer to get the 660.

What the teardown reveals is a good internal design to facilitate repairs if you can get replacement parts.

GadgetGuy’s review of the Mate 20 Pro – The World’s most advanced smartphone is the first time we have given five-out-of-five points for features, ease of use, performance and design.