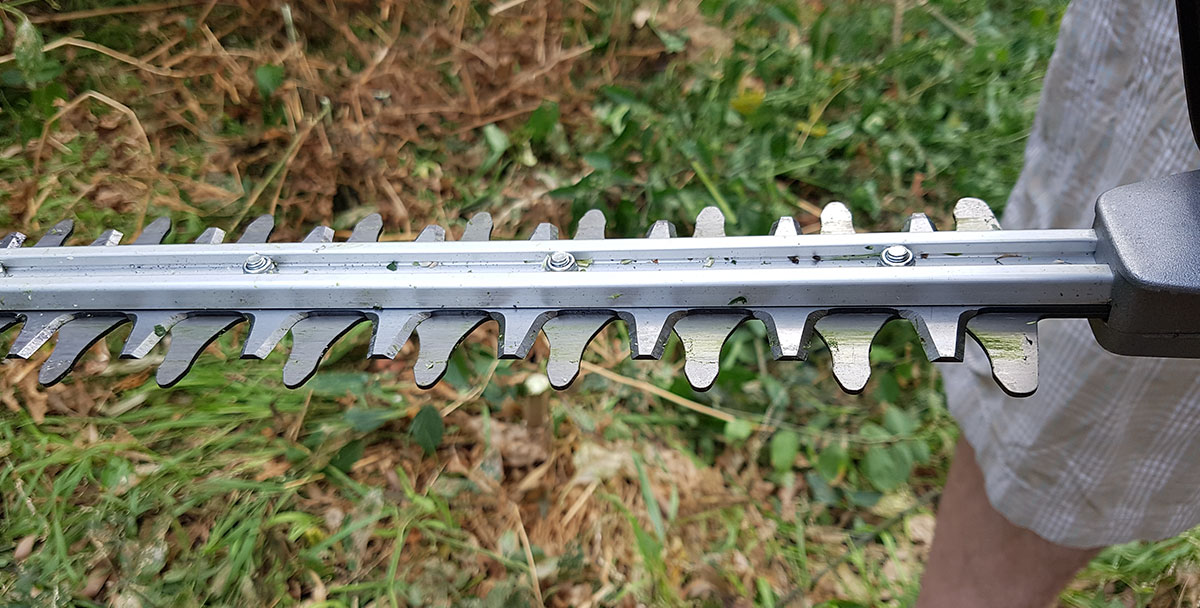 If a guy who rarely enters his backyard can use a hedge trimmer, it’s a winner, and that means Husqvarna’s battery powered 45cm trimmer wins the gold, ticking the boxes and trimming the hedges, too.

As a technology journalist, it’s probably no surprise to GadgetGuy readers that this writer spends most of his time behind a computer, a phone, a tablet, and pretty much anything else recognisable with a bunch of circuits, silicon, and programming inside.

Modern technology is what we know, and that includes all manner of devices you might rely on from day to day, including the smartphone, the laptop, desktop, tablet, cameras, headphones, speakers, appliances, home theatre equipment, and so on and so on until you’ve listed nearly everything inside of your local electronics store.

But gardening equipment isn’t one of those things we normally see, and with most of our time spent away from the backyard, that will come as no shock.

It’s not that we don’t like our backyard, but rather there’s more fun to be had with gadgets inside the house than out.

Or so we thought.

If the weeds in the backyard are becoming a touch too overgrown and the partner is suggesting that something has to be done, it might be time to consider a new appliance.

Previously, we had turned to the rented mowing teams, but recently, this journalist had wondered whether perhaps he should suck it up and try it himself.

Husqvarna’s 136LiHD45 was the gadget that allowed him to experiment with this, delivering a highly portable solution to someone that hasn’t spent as much time with gardening electrics, outside of monitoring gadgets for the green thumb.

Nothing like a flower monitor, the 136LiHD45 is a hedge trimmer, providing a 45 centimetre knife with an electric motor, Lithium-Ion battery, and a cutting speed of roughly 2700 cuts per second.

Setting up the Husqvarna Hedge Trimmer takes literally no effort, which is odd given you’re going to have to put in a little when it comes to cleaning out the backyard with the Hedge Trimmer.

Essentially, this gardening appliance comes in two sections: the trimmer and the battery.

We’ll deal with that last part first because it’s super necessary to make the thing work.

For the 136LiHD45 — which really needs a better name — Husqvarna provides a 2.1Ah 36V removable battery that is charged using a simple wall charger. To help you have a clue as to how much juice is left, the company has provided a small battery indicator on the battery itself, so even if it’s been left in the cupboard for a while, you can just press it and see the battery meter light up to tell you how much trimming you’ll get done before it conks out.

That’s super useful, and is a good portend for the rest of the package, so we inserted the battery, removed the trimmer from its plastic sheath, and got started trimming.

With the battery in place, getting the trimmer to work was a cinch, so much so that even a complete gardening newbie like this writer had no trouble getting his hands dirty.

We didn’t need to dirty up the hands, mind you, since protection was handled by gloves (even if they were women’s gloves, a fact my wife brought to my attention after the photos were taken).

Protection is also well catered by Husqvarna, with a simple two squeeze trigger system letting you fire up the trimmer and not have it inadvertently switch on when you’re casually holding the trimmer or clearing some branches.

Outside of the two squeeze releases, there are merely two buttons on the product: power on for maximum use and a more energy efficient mode, though we spent most of our time with that first button.

And with that button engaged, the trimmer fires up and starts your journey to cutting and trimming, which truth be told is a rather short journey, since it doesn’t take long to make work of the yard you need to clear.

We need to note that while ear protection is suggested, the trimmer wasn’t as loud as we expected, emitting a bit of a whine, but not so much that our ears would have been flustered if we hadn’t found some overly large headphones that probably didn’t do as much as we needed.

But the Husqvarna Hedge Trimmer seemed to have no problem handling our backyard, with some larger parts of the yard requiring a couple of goes with the trimmer, just to get the blades through the overgrown weeds, some of which were thicker than we were used.

The dogs will be thrilled.

While most people out there have experienced a bit of garden work in their life, this writer isn’t used to it, and suspects his in-laws are now grinning from ear-to-ear at the possibility that he has actually manned up taken a bit of control of the outside of the home, and he himself is, too.

Intriguingly, the experience also left this writer with much the same grin, because using the Husqvarna 136LiHD45 was like being given the beginner’s guide to dominating your backyard, with the keys to the most hyper pair of scissors you could ever have, and the ease of use accompanying it, also.

So would we buy one?

After this test, most definitely, and not just because it made short work of the ridiculousness that I had let my backyard become, but because it was simple, highly mobile, and didn’t at any point feel awkward.

Rather, the combination of an easy to charge battery that charges separately from the unit alongside a set of controls that are very hard to make mistakes with all add up to an appliance that every backyard should have.

Deadset, this is the trimmer to start landscaping with, and is ideal for the absolute beginner. Highly recommended.