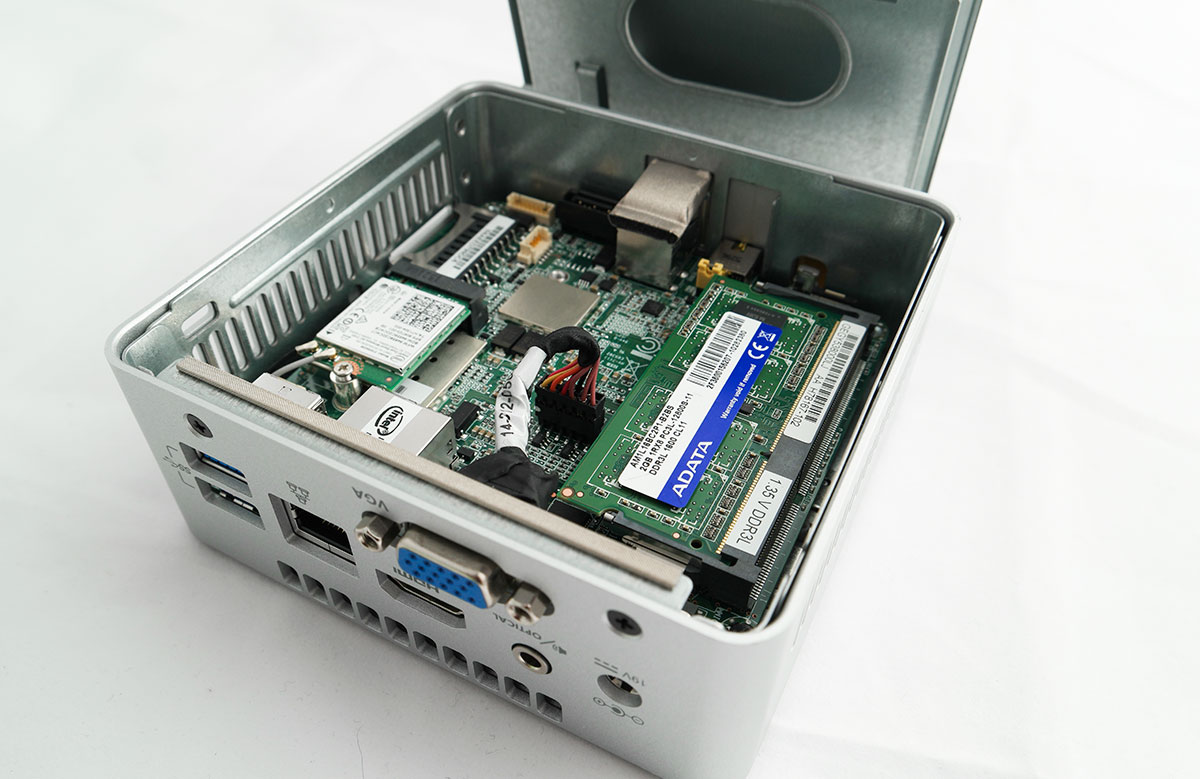 Interestingly, Intel has found a pretty good niche for its Next Unit of Computing, building what has to be one of the smallest computers you’ll find that isn’t attached to a monitor.

Let’s just get this whole desktop thing out of the way, because traditionally there have been two types of desktop in recent years: tower and all-in-one.

Towers are exactly what they sound like, with desktop machines that can sit on the desk, but tend to sit under it, with a full computer in a tall or long computer box. That is where most of the desktop development tends to sit, with new motherboards made for these larger form-factors, often taking speedy processors, large quantities of memory, big graphics cards, and plenty of storage.

Then you have the all-in-one, a space that has been mostly dominated by the Apple iMac. PC players are in this category, too, but there’s no doubting that Apple leads this, and that’s partly due to its development of the category. Normally, all-in-one computers are basically laptops attached to screens, though Apple has basically pushed this area to be a little more interesting with high resolution screens, faster graphics processors and colour-checking innards, and a general feeling that you’re not just getting a laptop but a capable desktop at that.

Intel’s NUC is a little different again, and tries to find a wedge between both categories, with the laptop style guts inside of a small box that can sit on the desk.

In essence, it’s the desktop for people who want a desktop and yet also don’t, who might want a computer they can see and upgrade but also want it small and relatively inexpensive.

Intel’s NUC is the middle ground for what constitutes a desktop, and it certainly has that down in design. What about in performance?

Switch it on and get Microsoft’s Windows 10 through its setup and you’ll find a machine that works, even if it’s definitely not the fastest thing on the planet.

Benching the system, it’s quite clear the Pentium inside would have at one point been considered fast, but is by no stretch of the imagination something like that now.

Closer to “fast several years ago”, Intel’s choice of Pentium here is adequate for web surfing and office work, but the moment you decide to do anything else, the combination of processor and small amount of memory won’t exactly do you any favours.

The performance here is more comparable to the inexpensive laptops HP, Acer, and Asus are selling for students, except you get more USB ports, a Gigabit Ethernet port, and the ability to expand the storage even more.

We can see it being useful for TVs for a very small home theatre PC, especially since there’s an infrared port bundled in, but outside of people who need the basics and anyone making a home theatre PC — a low-end one at that — the buyers of this machine are slim, since the performance is lacking.

Wireless is decent, though, with 802.11ac WiFi and Bluetooth 4 found inside, but beyond this, perhaps the one super positive part of this Intel NUC is how loud it is, or rather how loud it isn’t.

Specifically, it’s quiet, and if you’re expecting a powerhouse of a machine, the low-end guts combined with pretty much heatsink operation and no fans makes the Intel NUC a super quiet box that you can just leave on.

Pricing and value is the other area where Intel wins points, because with a recommended retail price of $449 and a street price closer to the $400 mark, Intel’s entry-level NUC is a solid choice for someone who wants something made for students but prefers it to stay in the one place and have more expandable support.

The parentals and grandparents are the first areas where this reviewer can see the value, especially since they’re less likely to download lots of things or spend time installing apps or games that the system isn’t like to handle, and with support for a large screen over HDMI and an SD card slot to load those photos from the last holiday, there’s a good logic here.

It’s hard to argue with a full-blown computer for the price Intel is offering it at, especially when it comes with Windows 10, which is usually another cost when you’re talking about OEM copies of operating systems.

Even the form-factor is cool, with the tiny box operating cool and quiet, and even arriving with a small mounting kit to connect the computer to a back of a monitor if you so choose.

Simply put, it’s speed and future-proofing, because there’s very little of each.

We’ve already touched on the processing power, or the lack thereof, and that’s something that needs to be realised when considering this version of the Intel NUC.

Intel does make some pretty fast and capable processors, but the Pentium found inside this tiny computer isn’t one of them.

Will it work for office work? Sure. Does it do the job for internet surfing? Absolutely. But will it do much more than that? Not really, and that’s kind of the problem.

There’s no doubt that the package is very impressive, and since it offers four USB ports, and SD card slot, an expandable hard drive bay, and HDMI, there’s more going on here than your every day standard netbook or budget PC, but only in regards to expandability. Everything else is more or less the same, and this is basically the mediocre PC you buy for your kids for under $300, except made for a desktop environment.

Future-proofing is a touch problematic, too, and this is because this NUC is basically an older processor and motherboard repackaged for a cheaper cost.

Not that there’s anything wrong with that, mind you. This happens all the time, and often results in less expensive technology over a longer period.

But it is still old what’s inside this NUC, with the 32GB storage with Windows 10 unable to be shifted over to a different drive if you add one, very little room to move on the memory side of things, and no support for some of the newer technologies, like the faster storage technology using the PCI-E connector.

Essentially, this is a several generation old computer packaged into a smaller box. That’s not bad, but unless you buying it for the basics, it is a touch limiting.

For less than $500, it’s hard to argue against Intel’s NUC, as the whole thing offers what is essentially a budget computer in about the smallest form-factor you can find.

If you know someone who wants a computer with a big screen but doesn’t want to spend much and already has a monitor they like, it’s an easy purchase, not just because it delivers Windows 10 out of the box on a budget, but it plugs right into either HDMI or VGA, suggesting older screens.

We can see families grabbing it as a cheap option for the kids, especially students keen to see what goes inside a PC to start them off.

There’s not a lot of upgradeability here, mind you, but for the price, we’re absolutely fine with that, and we suspect most others will be, too.

Overall
Features
Value for money
Performance
Ease of Use
Design
Reader Rating0 Votes
Pretty much good to go out of the box; Comes with Windows 10; One of the easiest ways to see what this whole “Next Unit of Computing” thing is all about; Includes support for a 2.5 inch SATA3 drive for expanding the storage; Good value;
Small amount of memory; SATA3 connection cable may not be included in the box (though Intel says this should be corrected in retail versions); No support for PCI-E storage; Relatively old processor; 32GB storage is a rather small drive to have Windows installed on;
4