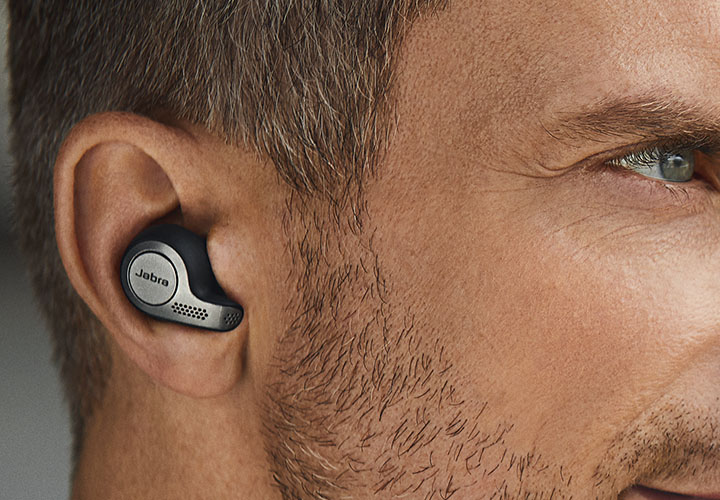 As I sat down to start writing this review, I gathered the necessary information. And as I did so, I took a double take. The price of the Jabra Evolve 65t wireless headphones was not at all what I expected.

The Jabra Evolve 65t earphones are priced at an eyewatering $605! The differences? Jabra has a FAQ for the earphones which answers the question. “The Evolve 65t has”, it says, “improved microphone performance for professional calls. It is SfB and UC-certified and comes with a Bluetooth adapter (Jabra Link 370) to connect to your laptop or PC. There are also minor visual changes.”

UC-certified means “Unified Communications”. It seems to have something to do with plug and play and controls conforming to certain standards. All this is giving us a hint about something.

The Elite 65t earphones were for entertaining active people. The Jabra Evolve 65t buds are for business people who spend a lot of time on the phone. Or on phone-like channels.

Of course, they will pair with your phone in the usual manner. But they come with that Jabra Link 370 USB dongle. That’s a tiny little thing and it is supposedly pre-paired with the earphones. Jabra says that you can “connect your headset to your PC with the Bluetooth adapter, and to a mobile phone at the same time.”

The Jabra Evolve 65t buds have a minimalist design. There are three sizes of silicon tips to best fit them to your ears. A small protrusion houses the four microphones. These employ noise-cancellation to provide for clearer gathering of the wearer’s utterances. They do not come with wings or fins to help lock them into one’s ears. The shape of the body might help them lock in for some people.

For me, it relied pretty much on the seal provided by the silicon tips. The earphones proved robust, since they continued to work perfectly well, even though they each must have fallen out half a dozen times, sometimes bouncing off the floor in the process. That sounds bad, I guess, but I’d add that would have been in perhaps forty hours of wear over several weeks. Nonetheless, ear-retention security was lower than average.

The earbuds are rated at up to five hours of operation per charge, which is certainly higher than usual. The hard charge case and carrier can recharge them twice, so you can be away from power for up to 15 hours. The case uses a Micro-B USB socket for charging. There are LEDs to show you the status of the charge of the case and the buds. It takes about two hours to charge from empty.

The right bud is the one that connects to the source device. The left bud connects wirelessly to the right bud. A single button on the right bud is for power, answering and hanging up calls, invoking Google Assistant or Siri, or for allowing the “HearThrough” function. That last one simply passes outside sounds through, via the microphones, so you can hear what’s going on around you.

The left bud has a kind of rocker. Press one way and the volume goes up, the other and it goes down. Hold it one way and the track skips forwards. You know the rest. Also, if there’s presently nothing playing, you can press it briefly either way to get a battery status reading, delivered vocally.

I know those things because I downloaded the manual. The tiny quick start guide provided in the box is really quite skimpy.

You can also control the phone using the Jabra Sound+ app on your smart phone. This can update the firmware and also includes a useful EQ function.

Which brings us to the …

I gather part of the UC certified thing is to ensure the unit works well with Skype and other computer-based communication systems. I was mostly interested in using the Jabra Evolve 65t earphones as a consumer, so I didn’t bother too much about the PC side of things for most of my time with these earphones.

But we do have to be complete. So, I took the dongle and plugged it into my computer. The Get Started guide says to do that and then install “Jabra Direct” onto the computer. It doesn’t say where to get that from, but I found it under “Support” on the Jabra website.

I followed the instructions, installed the software and fired it up. It recognised the dongle instantly and made “Jabra Link 370” the default playback and recording device on my computer. I started some music playing on my computer and … nothing. It seemed that the Jabra Link 370 was talking to the computer fine, but not talking to the buds. Indeed, it seemed to be looking for Jabra Direct

Then I noticed the following: the Jabra Direct software said that the paired device was the “Jabra Elite Active 65t”. Oh. That’s not the Jabra Evolve 65t. That was a bit weird.

And then I noticed that the manual kept referring to Jabra Direct 2.0 software. The download page said that what I’d downloaded was Direct 1.0. And, furthermore, that it’s being discontinued from mid-this year. And that “from 15 October 2018, any new Jabra solutions and firmware updates will only be available in Direct 2.0”.

Oh, okay. So, I went searching for Jabra Direct 2.0 software. If it exists, I couldn’t find it. I have up.

I did try pairing the earphones directly to my computer’s own Bluetooth, and that worked fine, both as earphones and as a microphone.

Given the business orientation, I wasn’t surprised to hear that the buds were clearly optimised for clarity and coherence in voice. The FAQ says that “The Jabra Evolve 65t has speakers optimised for both calls and music.” Out of the box, calls yes, music not so much.

You see, the clear understanding of vocals benefits from a controlled, even slightly diminished bass, and a strong upper treble. It’s in the treble where all the harmonics, which truly define the sound, are happening. Remember, too, that the buds are intended also for use with telephony. Skype-type telephony is typically fairly wide in bandwidth. But if you’re listening to someone who is using an old land-line phone on the other end, their voice is typically getting a bandwidth of 4kHz. Low-fi indeed. Every bit of higher frequency helps.

When I listened to some music, it was tremendously forward in the treble. Unpleasantly bright.

That’s not to say it has to be that way. Unlike the Jabra Direct software, the Jabra Sound+ app on my Android phone worked perfectly. I put on some familiar music and then dragged the five EQ slider controls to balance up the sound. You can see my results in the graphic, but essentially I reduced treble a lot and boosted the bass a bit. The good news: the drivers in the earbuds handled this nicely, delivering clean and musical sound.

Where does it happen

The EQ is processed in the earphones. I switched off Bluetooth in my Android phone, set the Jabra Evolve 65t earphones to pairing mode and connected them to an iPhone. When I started playing some music on it, the good tonal balance was preserved.

For a while. While I was listening to that music, I was downloading the iOS version of the Jabra Sound+ app. When it finished I fired it up. After a moment of setting up, the sound went – bang! – back to its treble-prominent style as the app reset the EQ to default. I adjusted it back.

It turned out that I could have both phones connected to the Jabra Evolve 65t earphones simultaneously. Only one at a time could play, of course. I’d have to pause playback on one to allow the other to play.

There are several other useful functions. In addition to “HearThrough”, you can set your voice to play through the earphones when you’re on phone calls. But the best one is the sensor which pauses playback when you take a bud from your ear and resumes playback when you put it back. If, that is, you do so within sixty seconds.

I don’t object to the default sound profile for two reasons. One is that these earphones are targeted at business use, so clarity of the spoken work is the priority. The second is that you can adjust all that with the EQ function. In practice, the earphones proved to be tough, if a little too ready to fall out of my ears. They also delivered decent sound, including a respectable bass performance.

The website for the Jabra Evolve 65t earphones is here.

Features
Value for money
Performance
Ease of use
Design
Good sound quality with EQ adjusted in the app
Unobtrusive
Potential for effective productivity when Jabra Direct 2.0 software is released
Surprisingly expensive
Sometimes insecure in my ears
4