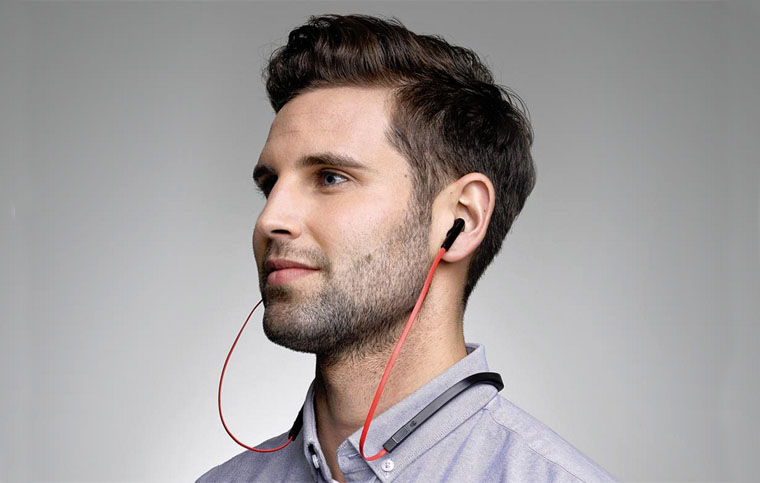 Suddenly Bluetooth earphones are a lot more important. Thanks iPhone 7! And here’s a set that might just do the trick of replacing wired with wireless: the Jabra Halo Smart Wireless Headphones.

The rather nifty design of these earbuds deals handily with a couple of issues. There’s a semi-flexible neck band or rest, and this houses the rechargeable batteries. Obviously there’s a lot more space there than in earbuds, so rather than the usual claimed five or so hours of battery life, Jabra says that the Halo Smart headphones – I’d actually call them earbuds – a  will work for up to 17 hours. And last standby for up to 22 days.

The other good thing is that it keeps the cables themselves short. Oh, I do so hate tangled earbud cables. It just doesn’t happen with these. In fact, they are to some extent self-organising. The earbuds can be kind of “clipped” together magnetically, or attached, also magnetically, to the neck band. The whole thing weighs just 38 grams, so there’s not much load on your neck, and almost none on your ears – another advantage of the batteries being in the neck band. The band itself can be adjusted a little so that it sits comfortably around your neck or on your collar.

On the right side of the neck band are the normal three buttons for control: a multifunction button in the middle for playing and pausing music, and answering and ending calls. The other two are volume up and down. But they also double as track skip keys (you hold them down for a second). Apparently you can answer calls by detaching the earpieces when they’re held together magnetically, and hang up by putting them back together. I’m having trouble envisaging the usefulness of this since that means they aren’t in your ears.

On the left side of the neck band is an additional button and the microphone necessary for hands free talking. That button will mute and unmute the microphone while you’re on a call. And when you’re not on a call, you can press it to invoke Google Now/Siri/Cortana according to your taste in phone. You just use the relevant system in the same way that you always do, and your robotic assistant will speak through the earphones in response.

Oddly, the codecs available for music aren’t specified. In the absence of specific mention of AAC (which is more Apple friendly) and aptX (which is more Android friendly), I’ll assume that only the default, lower quality, SBC codec is supported. It probably doesn’t matter too much since you won’t typically be using these earbuds for super critical listening in your lounge room. Heck, you wouldn’t use any Bluetooth earphones for that purpose!

The earbuds are neodymium 10mm units with soft silicon earpieces. Four tip sizes are provided (Jabra calls them “eargels” – cute!) They charge (it take one and a half hours) via a micro-B USB socket. A short cable is provided. Any computer USB socket or standard phone adaptor will do the trick. They are available in three colours.

Silicon tipped earbuds normally work well in my ears immediately out of the box, but even though the fitted cushions looked to be normal size, I couldn’t achieve a satisfactory seal, leaving them feeling a little loose in my ears, and certainly reducing the bass performance (for which a good seal is essential). But there were three other sets of silicon tips supplied with the headphones, and one of those was larger. Slipping the existing ones off and the larger ones on was the work of ten seconds, and that proved to do the job instantly.

It was clear pretty soon that these were not cheap earbuds in a clever design, but that they used premium drivers. I’ve heard poorer sound from more expensive wired units. They provided a wide frequency response, with nicely extended bass and a slight emphasis in the upper bass regions without overdoing it. Again there was a little emphasis to the mid-treble which tended to improve articulation in music, and coherence in the spoken voice (particularly on phone calls). But it also avoided sibilance. They had plenty of impact, while providing a smooth performance on music that called for it. Classical and jazz had the excellent attribute of not seeming confined to my head, but standing forward and sounding spacious.

There was a tiny bit of hiss, noticeable only between tracks, and quickly muted when there was no signal.

Look, the sound of earbuds is a highly personal judgement. I liked these ones quite a lot. I think most listeners will.

In use, I found they worked very nicely with my Android phone and with a couple of notebook computers running Windows. They didn’t work quite so well with an iPod Nano when I was going for evening walks. It took a bit of working out, but I think the Nano – which was bare, with no cover – tended to build up a static charge when it was in my pocket and this interfered significantly with its Bluetooth reliability, causing a lot of dropouts. But when I was at home and had it sitting on a bench while walking around wearing the earbuds, it worked perfectly.

My phone worked well most of the time even while walking around, thanks to the relative immunity to static provided by its case.

And that, I’m afraid, is going to be an issue with Bluetooth displacing wired connections. You will need a reliable Bluetooth source device.

In use, the unit is practical. A robotic female voice and a few gentle beeps provide feedback on what’s happening, such as when you wander sufficiently far away from the Bluetooth source to break the connection, and when you return to within range. It turned out that the unit could be paired to a number of devices at the same time, although of course it could only play from one (ie. be “connected”) at a time.

Initially the Google Now button didn’t work. Then I turned on the phone screen and found that the phone – a Samsung – didn’t know whether to use Google or Samsung’s own “S-Voice” app. When I selected the former, it worked perfectly. Likewise with Siri. If music was playing, it would pause and then resume after Google No/Siri had delivered an answer. I couldn’t get it to work with Cortana on my Windows computer. Perhaps it’s limited to the mobile version.

Was everything perfect? Well, I found the multifunction button a bit stiff and frequently found my pressure on it easing just short of the required number of seconds when setting it up for pairing. The micro-B USB was, as always, a pain. It’s fiddly to connect, and the little panel that hides its ugliness is equally fiddly to get out.

Nonetheless, the Jabra Halo Smart Wireless Headphones are a good solution to an increasing problem, and sound very nice indeed with music.