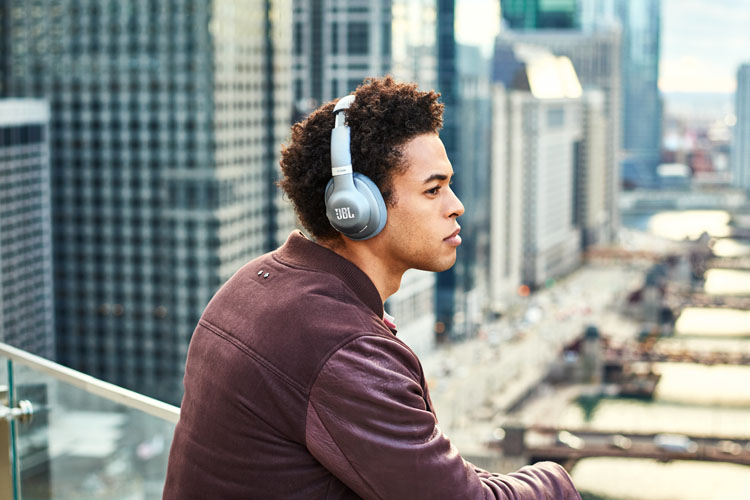 What does “Optimised for Google Assistant” mean? Can’t just about any modern Bluetooth earphones use Google Assistant? Well, yes, a little bit. But the JBL Everest 710GA headphones lift this to a whole new level.

The “GA” of the model number of course stands for “Google Assistant”. That’s the clever Google feature which organises you and manages some of your information. You can get Google Assistant on all manner of devices now. Most modern Bluetooth headphones will allow you to use it. Generally, you hold down the play/pause button for a couple of seconds to invoke it, then you start talking. The same microphones that the headphones use for handsfree phone talking, listen and pass your words to the phone. Then the phone answers you.

The JBL Everest 710GA headphones raise the bar on all that in two main ways. First, you invoke it by touching the left earcup rather than pressing a button. Second, it tells you what’s going on by passing on your notifications.

Of course, any Bluetooth headphone is going to receive notifications in the form of dings and pings. That’s what the JBL Everest 710GA headphones do as well. But if you tap on the earcup, it will first announce the time (with a female voice) and then announce notifications (with a male voice). With emails, for example, it reads out the name of the sender and the subject line. For shorter messaging services, it reads out the whole thing.

But they’re headphones too

And with the shorter messages, it asks if you want to reply. You tap and hold the right earcup and speak your message. The voice reads it back to you and asks whether you want to send it.

At any time you can tap and hold the earcup and speak to use Google Assistant just as though the headphones were a Google Assistant speaker. Get the weather, ask whether Bunnings is still open, all that good stuff.

The JBL Everest 710GA headphones are over-ear headphones. The cups are generous enough to fit my ears comfortably, so they ought to fit most. They do not include active noise cancellation, but provide a good seal to allow at least some passive noise reduction.

They fold flat to go into the included rigid, vinyl-finish carry case. The 3.7 volt 850mAh battery is rated to last 25 hours, and to charge up again in two hours. If it does run down, you can still use them with the included audio cable. This has a 2.5mm plug at the headphone end, so replacements are not so easily available. Also included is a bright orange USB charge cable, terminated at the headphone end with a Micro-B USB plug.

The headphones use 40mm drivers. JBL says that their frequency response is from 10 to 22,000 hertz, and that they are capable of delivering a sound pressure level of up to 111dB.

The controls are on the edge of the right earcup. They have a spring-loaded slide control for turning them on or off. Underneath that are two buttons for volume, with a play/pause/answer button between them. The latter is raised so it can be found fairly easily by touch. There’s also a Bluetooth pairing button, and a button from ShareMe 2.0.

That ShareMe 2.0 technology, which is incorporated in the JBL Everest 710GA headphones, lets you connect a second set of Bluetooth headphones (they don’t need to be JBL) so another person can hear the same source. I did not test this. I’m always happy if basic Bluetooth functionality works as it ought to. Adding additional devices rapidly complicates thing. Which headphones control the volume? Which control play and pause? Can you even set different volumes? I mention this feature in case you may like such things.

I used my Google Pixel 2 XL phone with the JBL Everest 710GA headphones, pairing them in the usual way. When I did so, the phone invited me to set up Google Assistant. I tapped it to agree, whereupon the whirligig icon whirled for quite some time, then announced that it hadn’t worked. Yet it had worked, it seemed, because I found that I could tap the right earcup and do all the stuff I mentioned above. I was also getting notifications.

Then, after a couple of weeks of use, I put on the headphones this morning to listen to music while writing up this review. And they announced that they weren’t paired. The phone had done a system update earlier, so perhaps this had somehow broken the pairing. For a while I couldn’t get the phone to connect to the headphones again, even though it was clearly aware that the headphones were handy. Google Assistant kept popping up a “Tap To Connect” message. A factory reset of the headphones and a reboot of the phone fixed that.

The value of Pi

I went to one of our articles to remind myself of some of the cooler things you can do with Google Assistant. After a while, the headphones got flaky with their response to my commands. They’d tell me if a store was open, but not answer simple arithmetic questions, or set a reminder. I fiddled with things for a while, but the solution was simply to switch the headphones off and on again. Then proper operation was resumed.

And they remained working reliably for the hours after that. (Despite all this fiddling and a several hours of music and podcast listening, my phone was till reporting the battery level of the JBL Everest 710GA headphones as 100%.

Google likes to have fun. Some time, ask your Google Assistant: “What’s the value of Pi?” For me, the assistant responded: “Okay, here goes, 3.14159265 …” and so on for a good thirty seconds. You’re supposed to be able to double tap the right earpiece to stop a response. I could not get this to work. Sometimes it invoked the voice telling me about my notifications … and this voice was mixed in with the voice listing the digits of Pi. The second time I asked the value of Pi, the voice told me, before starting, that I should “Feel free to say stop when I’ve had enough”. That worked, but only when I got the “Feel free” message. I tried when Google Assistant went straight to listing the digits, and it responded by asking me “I also need to know which device to use. Try that again and use the device’s name.” Huh?

I’m guessing the issue is with Google Assistant.

JBL has been around for over seventy years. Indeed, its founder, James Bullough Lansing, started building loudspeakers over ninety years ago. So, as you might expect, JBL knows how to make things like headphones.

My Google Pixel 2 XL phone reports the use of a higher quality codec than the standard SBC used by Bluetooth. With the JBL Everest 710GA headphones it reports none, so you only get the basic. Nonetheless, the sound was really very good. It wasn’t quite to audiophile level, but the tonal balance was excellent, the bass was extended and strong, without being overpowering. Voices were clear. Music was highly enjoyable, and there was plenty of volume on tap.

It took me a while to learn to physically handle the headphones without accidentally making Google Assistant talk to me. But it’s doable. I just had to change my handling habits.

I took a number of phone calls while wearing these earphones and everyone seemed to hear me clearly. Likewise, Google Assistant interpreted my words, using the JBL Everest 710GA headphones as the interface, about as well as it ever does.

The headphones held a very solid connection with the phone. Not once did it drop out with the phone in my pocket. I could be as much as thirty metres from the phone with no dropouts, regardless of my orientation.

You’re playing extra for the Google Assistant functionality. It can be a be a bit tricky, which is really to do with leaning to master Google Assistant, rather than the headphones. Their role is principally as an interface, and the JBL Everest 710GA headphones seemed to do that very well once they’d settled down into the routine.

All that would be of no interest if they didn’t sound good as well. And that they do.