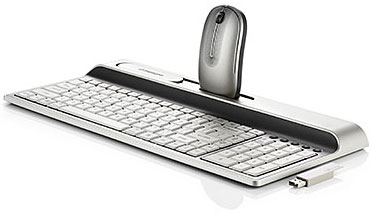 Typically when you go to buy a third-party keyboard and mouse for your PC or Mac, you spend hundreds on top-shelf items. But just because a set of peripherals is priced toward the budget end of the spectrum, doesn’t mean it shouldn’t find a place on your desktop. Kensington shows us how to combine style and affordability with the Ci range of devices.

The Ci family consists of two keyboards – wireless and USB – and a range of mice built in the same chassis but featuring wireless, USB and compact versions for notebooks.

The keyboard includes the full 104 standard keys plus five multimedia keys for common applications such as mail, web and music. There are also two USB ports for attaching self-powered devices such as a printer, scanner or digital camera.

Since most cameras use a mini-USB connector, Kensington includes one of these on top of the keyboard at the end of a short cord, hidden behind a sliding cover. It’s a neat presentation, and makes attaching a wide range of cameras simplicity itself. It’s not 100% universal though, so check your camera first!

The Ci mice are built on a basic chassis that includes two buttons and a scroll wheel. Some of the units include a battery life LED on the wheel, and there’s a wide range of styles to choose from to match your decor, from piano-black to a rather funky silver unit with racing stripes.

Once upon a time, setting up a new mouse involved installing drivers and other technical jiggery-pokery, but thanks to standardised systems, almost all mice and keyboards are now plug-and-play, and the Ci family is no exception.

Keyboard setup is straightforward: connect the USB cable and start typing! Some computers may need “USB keyboard” enabled in the BIOS for the keyboard to work while booting: once safely in Windows though, it will work fine.

The mice connect either via USB or 27MHz wireless, which involves plugging in a thumbdrive-sized wireless receiver, also into a USB port. The wireless keyboard has a receiver like this too.

Unlike Bluetooth devices, there’s no “pairing” needed: the devices just work automatically with their own transmitters.

Since both mice and keyboard are fairly basic units, performance is as expected. With two buttons and scroll wheel, the mice can perform all Windows tasks, but if you’ve grown used to an extra button or two for web browsing, you may find the Ci mouse a little limited.

The keyboards go for a very low-rise design, more similar to a notebook keyboard. This is fine for basic data entry and emailing, but if you plan to write the next great Australian novel, an ergonomic keyboard with split deck and keys with a higher travel may be better for your wrists in the long run.

The USB ports on the keyboard are handy, but since they don’t also transmit power there’s a limited number of devices you can use with them. Watch out also when connecting iPods or similar: the keyboard may not recharge them, depending on your setup.

While not as exciting as some of its more expensive competition, the Ci family is nevertheless a cost-effective way to either save on space or make your setup slightly funkier. If this sounds like a remedy for your current desktop situation, they will be a welcome change from the blight of standard-issue crusty old beige gear.

Other products in the Ci range

Other products in the range are: