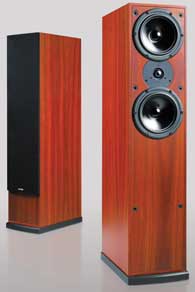 South Australian speaker maker Krix – known around the world for its cinema loudspeaker installations – offers here a modestly priced pair of two-way, three-driver floorstanders. The review speakers were finished in one of Krix’s real timber veneers, but if you can cope with a slightly lower level of quality in the finish, you can have vinyl veneer finishes in several styles for $150 less.

As for the real timber veneer, the review speaker’s ‘American cherry’ finish was gorgeous.

Within each enclosure you get a 28mm soft dome tweeter and two 165mm bass/midrange drivers. The enclosures are solidly made, with lots of internal bracing, weighing 19 kg each.

All this allowed them to produce sound that will satisfy music fans of most musical genres. They went deeply enough to produce the fundamental frequencies of a kick drum, yet seemed to avoid any kind of upper-bass boost that is sometimes employed to make speakers sound more bass-capable than they really are. The midrange was smooth, and so was the treble. But it also had a real zing with cymbals.

Best of all, though, was the efficiency of these speakers. They produced a lot of sound for a given input, and they had plenty of capacity for absorbing power as well, so they produced very high volume levels in my listening room. Often high efficiency means that you can skimp on the amplifier if necessary, but I wouldn’t recommend that with these loudspeakers because they have a fairly low 4 ohm impedance rating. Many lower cost amplifiers and home theatre receivers specify 6 ohm minimum loads.

Their stereo imaging was nicely tangible, with body, and stability. I tried some recordings specifically engineered to produce fore-aft movement in the stereo image and the Krix Phoenix speakers delivered that brilliantly, suggesting that they have good phase alignment between the drivers.