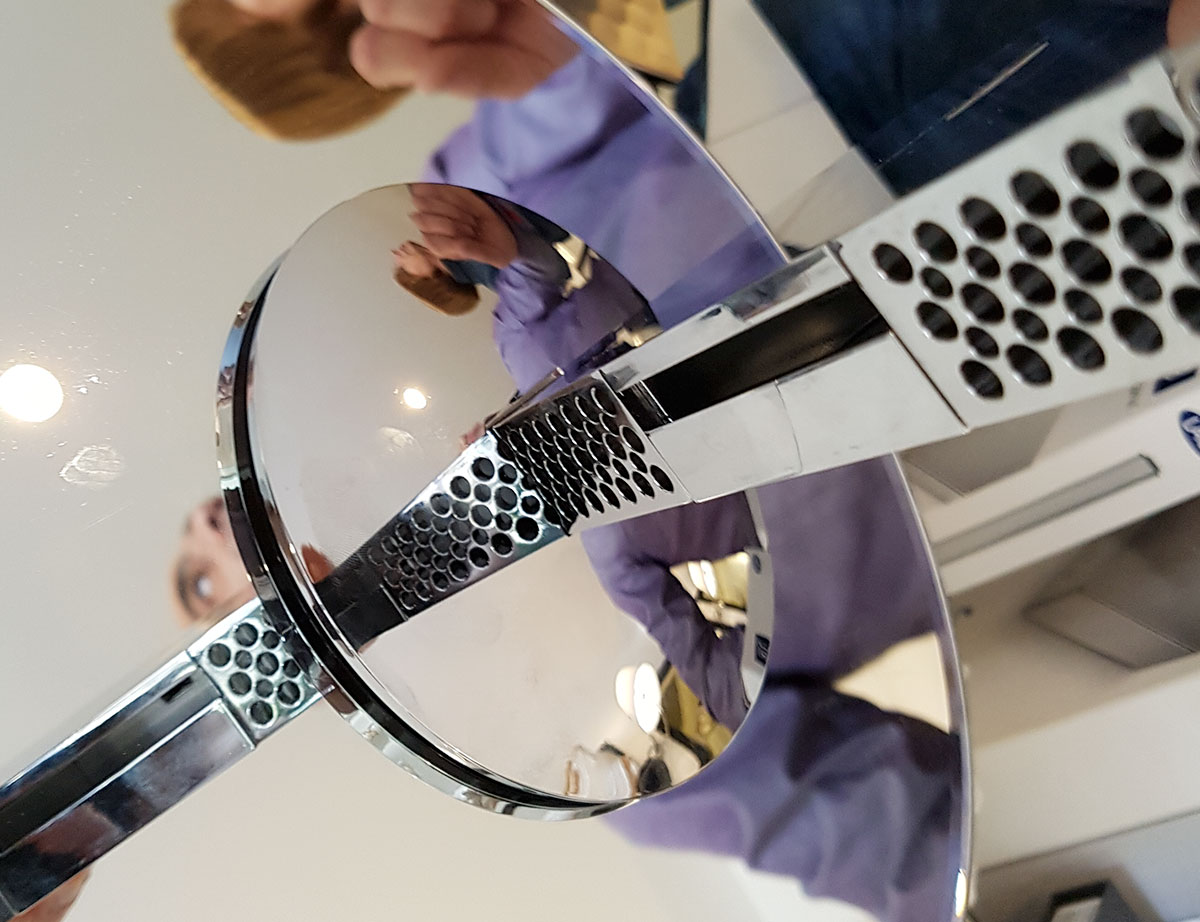 The future of hard drive isn’t with moving parts, but rather with solid-state, like the stuff in memory cards, and if you want something beautifully designed, be prepared to pony up the cash.

Hard drive makers have come and gone over the years — anyone remember Maxtor? — but LaCie is one name that has stuck around, giving people who may not like the standard external box plugged into their computer a little taste of something different.

LaCie drives are usually not dramatically different from other brands out there for what’s inside, either, as it’s usually the aesthetics that change. When you see them, you generally understand that, because you’ll see shiny minimalist pieces of aluminium art or a rubberised puffy block designed to withstand drops, all with a hard drive inside.

But this year, LaCie is shaking things up not just externally, but internally, too, showing off a new drive this week to Australian tech writers.

It’s called the Chromé, which LaCie wants it to be spoken as “Chro-may”, but we suspect most people will just ditch the accented “e” and call it exactly how it looks: chrome.

And chrome is precisely what LaCie has crafted here, going from a design by Neil Poulton to deliver a solid unibody piece of aluminium — basically a single block of metal — polished to chrome, with a unique magnetic dock made from chromed zinc that allows the block to stand in place in a metal dock to look like one form.

The result is something that is very, very pretty, as if the liquid metal bad guy from Terminator 2 decided to give up his thirst for destruction and enter the field of design instead, crafting something based on his own form.

Inside the Chromé, LaCie has also delivered on a future that the company has been running behind with, moving past the moving part hard drive for the first time with solid-state technology, equipping two sticks of 512GB M.2 SSD and sending the data across both for high speed transfers nearing one gigabyte (1GB) per second.

Technically, LaCie says this tops out at 940MB per second, and paired with USB Type C generation 2, the drive is super fast for getting files to and from a computer.

You will need a USB Type C connector to get these speeds, but even if you have an older USB 3.0 port, you’ll find a connector in the box.

Power is also there, because this drive needs to be powered, and that’s because there’s not just power that the memory sticks inside need, but also for fans to keep the memory running cool, as well as the heatsink sitting on the memory cool, with the aluminium dispersing the rest of the heat.

Perhaps the most intriguing part of this super fast futuristic design comes from the magnetic mount, because you can quickly and easily pull the drive from its base and take it with you, making it both stationary and portable, ideal for the modern age.

Pricing, however, isn’t likely to be your friend, and arriving with a recommended retail price of $2399.

When you’re done picking your jaw off the ground, you’ll find out that LaCie’s Chromé is available for special order, so if you want it, you’ll need to ask a retailer very, very, very nicely, possibly while giving them your platinum card.

It won’t be the only sexy hard drive LaCie has coming, though, with two from the design team at Porsche, the third time LaCie has brought Porsche’s designers on-board.

Two generations of drive are being brought out for this latest effort, with a Mobile Drive and a Desktop Drive.

While the names make what they are pretty obvious — mobile and desktop — the drives share things in common.

One is the design, with a metal block that looks like it would be at home with a Mac user, and since both are designed for the Mac, that makes sense. Apple users, look out.

Another, though, is the use of USB Type C, which in the mobile drive will supply all the power needed for getting the 10mm 1TB and 2TB drives working, while a 4TB option will be found in a slightly thicker 20mm drive.

On the desktop side of things, LaCie has taken the same design and brought over bigger drives, utilising either 4, 5, or 8TB with a design that needs power from the wall, but that will send it back to the USB Type C port the drive is plugged into, recharging a new computer using that port for charging.

Right now on the Mac side of things, this is the super-slim Apple MacBook only, but while LaCie says that these are designed for Mac, we suspect they’ll work with other USB Type C devices, including computers made by HP and Razer.

Pricing on the LaCie generation of drives does appear to be a little more friendly that that Chromé drive from before, with the mobile editions arriving now for $184.99 for 1TB, $249.99 for 2TB, and $389.99 for 4TB, while the desktop editions will be priced as soon as they’re available in the next few months.