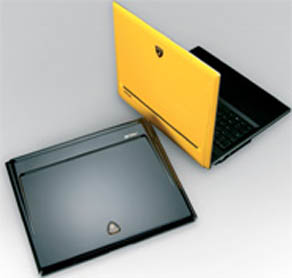 Want to own a Lamborghini but don?t have a spare half-million bucks lying around? Well, if you don?t mind forgoing the wheels, then you can own your very own supercar icon with the ASUS Lamborghini VX1 notebook.

There?s no mistaking the pedigree of the VX1, from its sleek aerodynamic lines, to the trademark bright yellow hue and metallic mesh under the lid and, to cap it all off, the inclusion of the iconic Lamborghini logo on the lid. ASUS has gone all out to ensure its flagship portable PC is branded in suitable supercar style, and it?s also put a lot of thought into what?s under the hood.

The VX1 is based around the Intel Centrino Duo platform, meaning it sports one of the latest Core Duo processors, along with an Intel chipset and wireless functionality.
The VX1 is very well equipped when it comes to storage, with a massive 160GB drive complemented by a dual-layer DVD burner. It?s also not short of connectivity options, with it packing Gigabit Ethernet for your wired networking or broadband needs, as well as 802.11a/b/g networking, Bluetooth and it even features a media card reader supporting SD, MMC and Memory Stick cards.

Somewhat surprisingly the VX1 doesn?t have a widescreen, but a 38 cm (15 inch) regular 4:3 LCD screen. This screen is of very high quality, is available with an optional glossy finish, and can handle an impressively crisp 1400 x 1050 resolution. It also has a zero bright dot policy as a part of its two-year warranty, which means ASUS will replace the screen if even a single bright dot defect is detected.

With all this packed in, the VX1 is also pleasingly slim and light, as well as feeling solid and rigid. At nearly 2.5 kilograms without its carry case, it?s light enough to be portable, but it would hardly be considered ultra mobile. If you do want to lug it around, it?s supplied with a rather attractive Lamborghini-branded bag and also comes with a small Bluetooth mouse. Battery life is respectable, with a couple of hours of use from the supplied eight-cell battery, but given the performance oriented nature of the VX1, it?s not a priority.

Replacing the usual ten cylinders and hundreds of horsepower are two processor cores and a couple of billion hertz. Powering the VX1 is one of Intel?s latest Core Duo 2GHz dual-core processors, which forms the fulcrum of the latest Centrino Duo platform. This processor is no slouch, and when coupled to 2GB of DDR2 RAM, it will happily race through any tasks you choose to set it. Being dual core, it?s also especially suited to running multiple applications simultaneously, although it?s not much faster than a single-core chip when running just one program.

In terms of graphics, the VX1 sports a specially made NVIDIA GeForce Go 7400 chip backed up by a whopping 512MB of graphics memory. This is a very respectable chip for mobile systems, although it can?t quite keep up with the latest desktop graphics cards, especially when it comes to playing the latest games. You?ll still be able to run the likes of Half-Life 2, but you may have to pare back some of the graphical bells and whistles to get it to run smoothly.

The Lamborghini VX1 shows that style can be effectively blended with substance, with it sporting an impressive feature-set, high performance and having a unique and head-turning appearance. You pay a premium to have the Lamborghini badge on your mobile PC, but if looks matter to you, then the VX1 will make you feel like a millionaire.