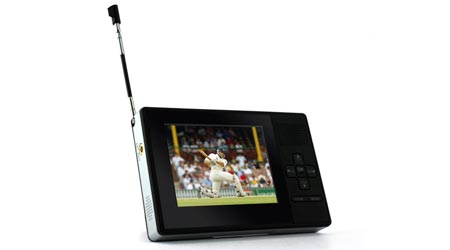 Laser’s MP32 portable digital TV player is neat and well executed, but the nature of aerial reception means a solid television picture is not something you can count on.

We at GadgetGuy.com.au love TV. On the daily commute, waiting in the carpark for mum to return from shopping, camping down at the river, on the sidelines of little Bruce’s soccer game, or under the covers long past bed time – we can’t get enough of it. Which is why we were excited about Laser’s MP32, a ‘pocket’ digital TV that receives all the standard definition Freeview channels – including the new ABC2, ABC3, Go, One and 7TWO services – records television and plays and records DVB-terrestrial radio channels.

Only SBS and ABC are transmitting these right now, but load up an SD card with tunes and the MP32 compensates as a handy music player (MP3, WAV). It will also play photos and movies stored on SD card or a USB2.0 hard drive via a mini-pin connection. Video formats supported include MPG4, DivX4.0/5.0, DAT, VOB and AVI, with JPG, BMP and GIF image files also supported.

While not exactly pocketable (120 x 78 x 20mm), the MP32 will fit easily into a handbag or backpack and weighs a mere 200 grams, which is less than most smartphones.

The screen is a bright, colour 3.5 inch LCD displaying 320 x 240 pixels, to the right of which is a small speaker that outputs audio at acceptable volumes. Below that is a simple seven-button thumb pad for controlling volume and channel selection, and for easily navigating the software menus.

Three transport control buttons, an SD card slot supporting up to 32GB, lock and power buttons are located at the top edge of the unit. A tiny telescopic antenna pulls out from the body of the MP32, or you can use the included set of miniature ‘bunny ears’ via the unit’s external antenna plug.

A 3.5mm headphone socket doubles as an AV output for sending analog audio and composite video to a larger display. A kickstand pulls out from the rear of the unit, allowing the MP32 to be located for viewing on a flat surface.

A rechargeable polymer battery is integrated into rear of the body, with power sourced from an AC adaptor. Considering this is a portable device, a 12 volt (cigarette lighter) to 5 volt charger unit would have been a nice inclusion. It is, however, a cheap enough aftermarket purchase.

Operating time is stated at three hours, and in the absence of any advice from Laser, we assume this rating applies to video playback.

The graphic interface of Laser’s Pocket Digital TV makes accessing its various functions easy. You can view the available digital channels via an electronic program guide that displays Now and Next information alongside a video PIP of the current broadcast on your selected channel. A more comprehensive program list by channel is accessed by doing deeper into the menu.

There’s also a Channel Info feature that shows signal strength and quality as a bar graph. When the bars are yellow or green you have reception; when they are red the picture breaks up or vanishes to a black screen.

We saw a lot of black screens.

Laser recommends the MP32 be used only where digital TV reception is strong, such as metropolitan areas, and our test locations were in the Sydney CBD – around two kilometres from a transmitter – and an eastern beach suburb eight kilometres from the CBD. We were unable to sustain a solid signal in either location; we’d find a room where strength and quality were green and locate the MP32 at that spot, but the signal rating never remained constant and we frequently experienced picture drop-out and pixelation.

We spent a lot of time wandering through rooms like a water diviner, holding the MP32 before us and ‘twizzling’ its tiny antenna in search of reception. The external antenna, which Laser recommends be used indoors, made no noticeable improvement.

On the roam, reception was intermittent too; the MP32 is not something that will amuse the kids in the back on long car trips. Ironically, we managed good reception in the back yard under a tree – but strong ambient light meant we couldn’t see the picture on the LCD.

The unit’s music playback, photo and video display features go a little way to making up for these shortcomings, though without internal memory loading media from a computer is less convenient that via USB. In addition, video files on SD can be only 4GB. Larger files will be broken into 4GB chapters, which according to Laser, represents around 2.5 hours of viewing.

Recording broadcast programs to SD was a doddle, and playback (dropouts and all) was as per the original. The MP32 does not allow time-shifting, meaning recording is possible only when the MP32 is in TV mode – so, like, when you’re actually watching TV – and only for the channel displayed on the screen.

We really wanted to like Laser pocket digital TV, but there are other multimedia devices that do music, video and photos better, and provide photo and video capture into the bargain, plus larger storage capacity. The TV recording feature is useful, I suppose, if you see yourself wanting to keep a copy of a program you’ve already watched (albeit intermittently).

As to its unique feature – that of portable digital TV reception – it’s just too flaky. While the blame for this may lay with the MP32 it’s more likely due to the patchy nature of unwired television reception in general (TV tuner cards for PCs don’t do any better). Where the fault lies, however, is fairly academic. As a device you can count on for watching digital television indoors or out, the MP32 doesn’t impress.