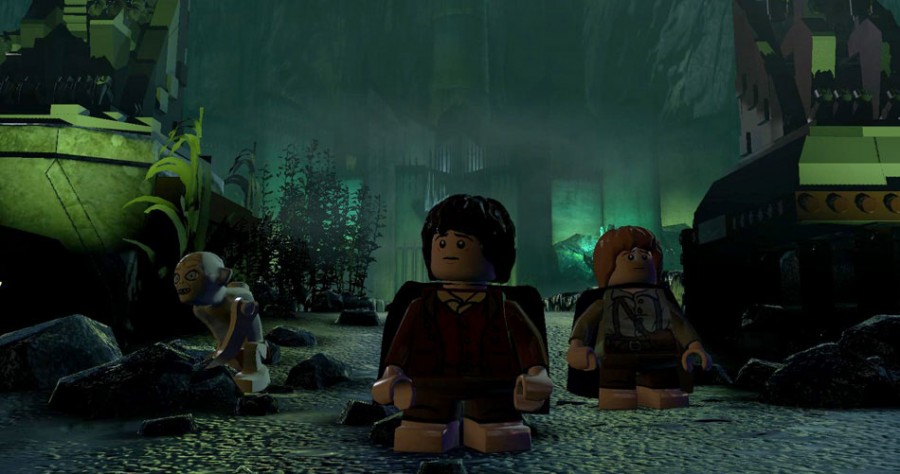 With a property like The Lord of the Rings, Traveller’s Tales has embarked on probably the most epic undertaking possible in bringing it into the LEGO game universe. LEGO Lord of the Rings may be the latest in a long line of LEGO games, but that doesn’t mean the formula has tired. Far from it, in fact.

LEGO Lord of the Rings sticks closely to the source material which, given some of the drama of the films, may make you wonder if it’s still a kid-friendly game.

That said, there’s probably more to do, more to collect and a bigger area to explore in this game than in previous LEGO outings, so it’s sometimes easy to wander from the path of the main quest and, at times, be utterly clueless about what you’re supposed to be doing next, so it’s handy that you can summon a line of blue LEGO studs to point the way whenever you feel the need.

The game can, of course, be played alone, but we recommend you gather family or friends and settle in for the weekend.

Playing in co-op, you may find yourself doing something completely different from your partner on the other side, as Frodo slips on the ring and turns invisible, entering a darker domain, or as the path diverges and you go separate ways. This often encourages players to play together, gently underscoring the collaborative intent of all LEGO video games.

The trademark LEGO game humour is also present and correct – we loved Gimli ‘racking’ his axe! – and it works despite the fact that the developer chose to use real voiceovers this time.

Unfortunately, we feel the dynamic split screen mechanism is disastrous in this game.

LEGO Lord of the Rings, as in all LEGO games, cries out to be played in local multiplayer, but the mechanic the developer has implemented for when your characters wander off from each other has undergone several iterations.

While it has worked well before, we’ve found that in the previous game, LEGO Batman 2: DC Heroes and this one, the split is often initiated at horrible moments, completely disorienting the player and making navigation confusing and unnecessarily difficult.

Thankfully, you can go into ‘options’ and force the game to fix the screen in a vertical split in multiplayer, which we strongly advise you to do.

Despite this trifling complaint, LEGO Lord of the Rings is a masterpiece.

If you haven’t bought this game already – and particularly if you’ve had fun with previous LEGO games – LEGO The Lord of the Rings: The Video Game should be the first thing on your Easter shopping list.

LEGO to Father’s Day in Sydney. Yoda not want to miss it.