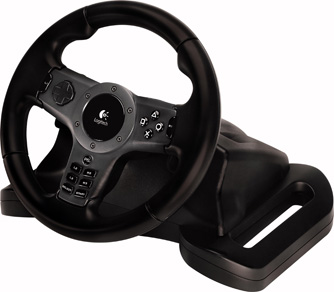 No need to rearrange your living room – now you can add force feedback realism to your driving-game experience in seconds. Logitech, a world leader in force feedback technology, today announced the one-piece Logitech Driving Force Wireless force feedback racing wheel for PlayStation 3. Quick to set up and easy to store, Logitech’s one-piece design includes an expandable lap rest so you don’t need to mount your wheel to a table. You can conveniently experience the exceptional realism of force feedback driving anywhere you want – on the sofa, the arm chair or the floor.

All the controls, all together

Everything you need is built into the one-piece design of the Driving Force Wireless, including controls for accelerator, brake, shifting and menu navigation. Also featuring 2.4 GHz wireless technology for lag-free range of up to 10 metres, the Driving Force Wireless force feedback wheel adds convenience to your racing experience by eliminating the console cable. To start racing, just plug in the USB receiver and power cord, put in a driving game, adjust the lap rest to a comfortable position and wait for the race to begin. There’s no mounting or assembly involved. And when you’re ready to put it away, the USB receiver can be stowed in a convenient compartment.

Force feedback, unlike vibration feedback or rumble technology, creates directionally precise, tactile feedback that accurately simulates forces experienced in the game. Through the use of advanced software and electronics, force feedback can move a steering wheel or joystick as if the device were subject to real external forces.

The Logitech Driving Force Wireless force feedback wheel is expected to be available in Australia in mid August. The suggested retail price is $149.95 (AUD).