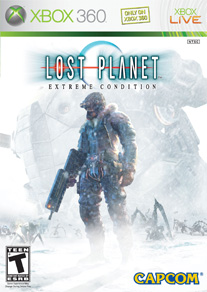 Lost Planet is a blast. It’s worth pointing that out right at the start of this review because, if you’ve played a lot of games, or are easily put off by formulaic presentation, this game may lose you early on otherwise.

Just like the Rocky movies, videogames have a bit of a reputation for sticking to ‘tried and tested ways’ once they’ve found a winning formula and in this regard, Lost Planet is no exception. The premise for Lost Planet, from game developers Capcom – fighting for survival against large, insect-like enemies on a frozen planet – is not one that immediately grabs your attention and yet bear with it through the horrendously unnatural and stilted narrative scenes and you unearth an unexpected pleasure.

The first time you jump into a ‘VS’, or ‘Virtual Suit’; Capcom’s name for a mech, the experience is exhilarating. And that first time is basically straight away, right after the opening, story-setting scenes. The VS are massive, powerful, fantastically clunky hulks of metal armed to the teeth with loads of fun weapons. They’re impossible not to like and although finding one tends to mean that you’re just about to be pitched into a big battle with an even bigger enemy with the odds stacked firmly against you, the sheer pleasure of leaping in and booting the thing up prepares you for the fight.

Some of theÂ bosses (a very formidable foe that needs to be defeated in order to progress to the next level of gameplay)Â in the gameÂ are huge. Predictable, maybe, and frustrating without being terribly challenging, given the teeth-grindingly slow progress your character makes on foot, or in that same boot-up process in a VS, but still huge and engaging to join battle with. The boss battles occur frequently – too frequently, perhaps – and are, in fact, very traditional videogames fare, with their dogged pattern routines and obvious ‘weak spots’.

These boss battles, combined with the innovative ‘thermal imperative’ (you collect the thermal energy of the alien species you kill, a must, as it adds time to your Life Meter, below a certain point your character dies) to the gameplay and the brilliant mechs give Lost Planet a strange ‘old but new’ flavour – you’ve seen it before but not quite like this.

There’s more atmosphere than you might expect, for starters, with superb graphics including entirely credible character movement and blinding snow and smoke effects lending a real sense of immersion in the dangerous, foreboding environment. There’s a good variety of weapons that feel both powerful and, thanks again to good physics implementation in the game, suitably heavy and unwieldily. And there’s stacks of action – even though the human enemies you come across are pitiably stupid, making them sitting ducks most of the time – keeping you motivated to get to the next stage and ultimately finish the missions.

So if you like your action fast and furious, you’re not over the whole ‘giant bugs attack humans’ thing and you’re crying out for a good mech game, Lost Planet is a must-buy. The single-player game is superb while it lasts and, after that, there’s tons of multiplayer mayhem – no co-op though, sadly, to wreak on your deathmatch-loving mates.