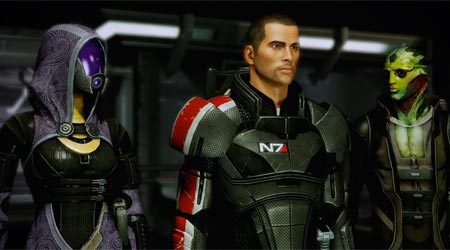 Mass Effect 2 may be yet another title published by EA but don’t let that put you off.

Designed, coded, drawn and promoted by BioWare, Mass Effect 2 is, obviously, a follow-up to the popular sci-fi single-player PRG Mass Effect, but it’s had a devastatingly effective makeover and is now destined for greatness.

With an opening scene rivalling any sci-fi movie, superb camera work and effects including reaction shots, extreme close-ups, dramatic angles, long shots, depth of field, slow motion and flashbacks (used to great effect, imbued with emotional impact) and some of the best ‘mini-games’ we’ve ever encountered, it’s the small things that make Mass Effect so entrancing.

A sci-fi action adventure game at heart, there’s a huge map to explore, much improved combat from the first game, a superbly-integrated suite of main ‘campaign’ game missions and side missions, a well-paced and expertly-judged challenge, an entertaining and well-written narrative arc and it’s all set to an absorbing science-fiction theme.

I’m gushing, but ME2 is what I’d always wanted a Star Trek game to be, but never was. Heaven in an Amaray case.