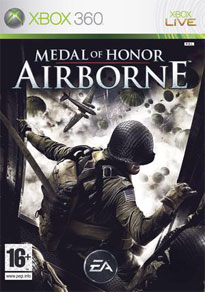 Medal of Honor: Airborne is the latest in a long line of Medal of Honor games and an even longer line of World War II-themed videogames. To be successful, you’d think, just like a new movie based on World War II, it’d want to be doing something pretty darn special to entertain the troops.

Sadly, while there’s plenty of gun-toting action in Medal of Honor: Airborne and a strictly controlled but well-considered narrative and pace to the game, it’s really full of wasted opportunities. The enemy AI, critical to any shooting game, is woefully dumb but the guys on your side make them look like a room of nuclear physicists in comparison, such is their ability to step in front of you just as you throw a grenade, or stand in open ground and take the bullets like a man. A dead man. There’s no real destruction of the environment, and hiding behind an overturned table is all the protection you need against an entrenched machine gun nest, or hand grenade.

And the new ‘raison d’etre’ for this title, the parachuting action, is great for maybe the first couple of times, then gets old very quickly. Worse, there’s virtually no impression of actually hurtling groundwards when you’re in the air, or any of the attendant (and, at that time) horrendous dangers of being inserted into a war zone by air. It’s more like you’re just floating quietly and peaceably to earth in a gently-leaking hot air balloon. The ?Airborne? part of the equation really doesn’t amount to anything more than a gimmick, which seems like a terrible shame.

But the real fun-killer in Medal of Honor: Airborne is the save system. Basically, not unlike many other videogames, this one uses a ‘checkpoint’ system, which saves the game for you once you’ve passed a certain point in the mission. That’s not a problem. The problem lies in how the developers have identifiedÂ  these checkpoints, which seems to be a strict ‘achieve this task and we?ll checkpoint your progress’ method. Which means, much, much more often than not, that if you die you’ll find yourself resurrected right back at the beginning of a section of the game that then takes you about 20 minutes to return to the point you died. In other words, this game redefines repetition and comes up with a new word: ‘repetearmyhairoutscreamingtition’ as you retread your path, taking out exactly the same enemies (and, if you like, in exactly the same order and at exactly the same points).

Still, there’s plenty to like in the game in a more superficial sense. The action is furious, the weapons feel great to use, with an excellent upgrade system, and the environments can present a very decent challenge. If you’re looking for more of the fun, mindless shooting variety of videogame than thoughtful and realistic, Medal of Honor: Airborne could be just what you need. Just put your patience hat on first.

Medal of Honor: Airborne is available on Xbox 360, PC and PlayStation 3