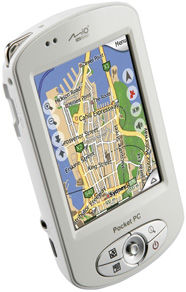 If you’re after a GPS but want more value for your money than a simple GPS offers, then Mio’s attractive P350 may be exactly what you’re looking for. While it’s neither a great PDA or a stellar GPS, it offers a good value combination of both as long as your wants and needs are simple.

The P350 stands out from every other GPS we’ve ever seen, simply because the review model we saw came not in the de rigeur black, but white instead. It also stands out from the vanilla GPS pack simply because it isn’t just a GPS, but also a portable digital assistant (PDA). This isn’t unique – HP has been offering GPS-equipped iPAQ PDAs for some time – but at this price point the P350 is a quite compelling proposition.

On the GPS front, the P350 uses the same standard SiRFStar III chipset for GPS triangulation as every other GPS on the market currently, and like all the rest, uses Sensis data for its Australian mapping. The P350 uses Mio’s MioMap software for actual GPS route finding, and this is launched like any other PDA application, by tapping it with the stylus.

On the PDA side of things, the P350 runs Windows Mobile 5.0, meaning it’s capable of reading and editing simple Word, Excel and Powerpoint files, as well as running other applications written for the platform. At a technical level, the whole P350 runs on a 400Mhz Samsung 2440 processor with 128MB of internal ROM for storage.

The P350 was on the sluggish side when setting up GPS synchronisation, something that’s not helped by the fact that you have to launch MioMap as an application from the PDA itself. Still, we typically had to wait around two minutes to get a signal lock, and often found the positioning data to be a couple of metres from our actual location while driving. The MioMap application also suffers from being a bit obtuse in places; while you’ll get to grips with it in the end it lacks the polish and ease of use of TomTom or Navman’s approach to GPS searching.

As a PDA, the P350 is also on the average side. It runs the same applications as more powerfulÂ – and more expensiveÂ – PDA systems, but generally a lot slower and with more waiting time while it crunches through files.

The two parts of the P350, GPS and PDA, are by themselves unremarkable. The combination of the two, however, in the context of the low asking price of $499, makes the P350 a quite compelling GPS option if you’re looking to do more with your GPS than just plan driving routes.