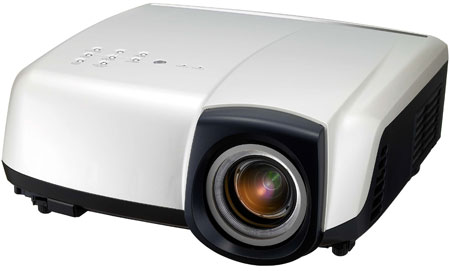 It wasn’t very long ago when the LCD-based projector was something that one of limited financial means would put up with, by virtue of DLP-based models being monetarily inaccessible. How things have changed in the last couple of years.

The Mitsubishi HC5000 is a case in point. For under $8,000 you get a true high definition projector offering that is, in some respects, nearly as good as the most expensive projectors available. And in other respects, it is as good or better than them.

With three LCD panels, each with a resolution of 1920 x 1080 pixels, the HC5000 allows you to get every bit of the image, whatever the source, onto your projection screen. The major shortcoming of LCD projectors – relatively poor reproduction of black levels – is dealt with by means of a dynamic iris, which chokes down the light level during dark scenes.

But the major feature of this projector, aside from its resolution, is that it incorporates HQV (Hollywood Quality Video) video processing from Silicon Optics. This is one of the most highly regarded video processors currently available. It handles the conversion from interlaced to progressive scan, a notoriously difficult matter.

Inputs are provided for all current video formats, allowing the connection of any video sources.

The projector has powered zoom, powered focus and powered lens shift (a lot of range vertically, a little horizontally). In each case, the adjustment starts off slowly, and speeds up after a delay. That made it very easy to match the picture to the projection screen.

By default, the projector has a fair bit of overscan, lopping about two percent off the picture on each of its four sides. This can be eliminated if you prefer to see every bit of the picture, but it requires drilling down through the menu structure for each input individually.

The projector offered decent blacks, but not quite as good as the similarly priced Sony VPL-VW50, which uses LCoS technology (and a dynamic iris) to produce its picture. But in practice it was more than adequate to deliver excellent low-light detail.

But that is a minor issue because the picture quality was magnificent by reason of HQV. The high definition test loops from the 1080i TV stations were as good as I have seen them, and better than most of the competition. They were cleaner and more detailed than other projectors, seeming to be a view on the world, rather than a reproduction of a TV image. With DVDs the picture quality was superb, especially with lesser quality discs. Here the HQV processing was able to extract the very best image.

To provide the very best quality video signals for its high definition panels, the projector also supports the progressive scan versions of 1080, produced by HD DVD and Blu-ray players. It even supports the new, improved, 24 frame per second version of this (called 1080p24) that should be appearing later in 2007.

The Mitsubishi HC5000 is an excellent projector, producing among the best images from any high definition projector at any price. If I was spending $8,000 on a new projector, this is the one I would buy.

Overall
Features
Value for money
Performance
Ease of Use
Reader Rating0 Votes
Excellent picture quality with all current video sources, including Blu-ray and HD DVD. Great value for money.
You know, I just can't think of a thing.
4.4