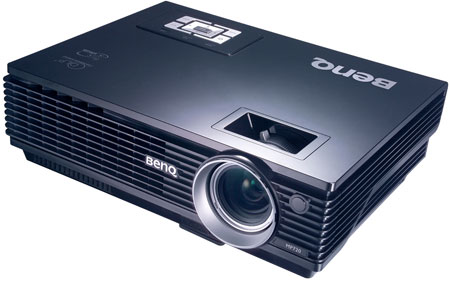 BenQ must have an inside contact at the local DLP component factory, as it has recently introduced several DLP projectors that offer amazing bang for buck. The BenQ W100 was the first sub-$1500 projector to introduce a seven-segment, four-speed colour wheel, helping to remove the rainbow effect for first time DLP buyers. The MP720p follows this wallet-friendly trend by being one of the most affordable high-resolution DLP projectors on the market.

Don?t be fooled by the name of this unit. Unfortunately it?s not a 720p projector, and is in fact a 4:3 aspect ratio 1024 x 768 model. Yes, we were surprised too, and because we regard a 16:9 imaging chip as the minimum requirement for a home theatre projector, this places the MP720p officially within the data projector category.

The MP720p does, however, provide a widescreen mode, but because this effectively crops a rectangle-shape from the square(ish) imaging chip, the resulting picture is created from somewhat fewer pixels than the stated 1024 x 768. Nevertheless, BenQ claims it is quite capable of dual use as a home theatre projector, and it was in this regard that we put it through its paces.

Setting up the projector was a simple affair. At under three kilos in weight, this projector is easy enough to move around, and a padded carry bag is included. It needed quite a long throw distance to achieve an image of the size that it?s capable of (around six metres from the screen) before we felt that it was at its limit. Due to the lack of any lens shifting features, it was set up in the centre of the room. A component connection is, surprisingly, not included, so a VGA-to-component adaptor was used instead.

Calibrating was very simple. A little too simple in fact. This was due to the lack of image quality adjustments, with only the most rudimentary of controls such as brightness and contrast featured. It could be for this reason that the image quality was less than anticipated given the fact that it uses DLP technology.

While the brightness couldn?t be faulted, this projector suffered a major problem with crushed blacks. The opening intro of the latest Harry Potter flick lost much of the detail within this relatively dark scene, even when compared side by side with an older LCD projector. Xbox 360 games, which have issues with being too dark to begin with, also lost a lot of detail.

Perhaps a bigger problem was the rainbow effect, a type of artefacting  particular to DLPs fitted with lower speed colour wheels. For those sensitive to the artefacting (and not everyone is), the rainbow effect manifests as super-fast barely-there flashes of colour over the projected image and, in our viewing sessions, it was immediately apparent, and very distracting, to several viewers.

In its favour, colours from the MP720p were richly reproduced and didn?t need much tweaking to appear accurate. Fan noise was also negligible.

While it?s promoted as being capable of home theatre use, the issues with crushed blacks and the nauseating rainbow effect mean it?s best left in the boardroom. However, if BenQ can remedy these two problems, the successor to the MP720p will offer high resolution DLP projection at a price that makes it irresistible.