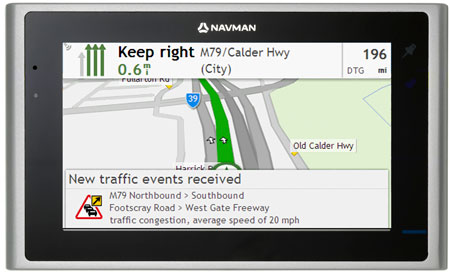 The S300T is an attractive looking unit – arguably the best looking GPS money can buy. It’s stacked with just about every feature you could want or expect in a premium GPS, but the decision to go with a full, iPhone-style touch interface is the unit’s Achilles heel.

The S300T sits at the top of Navman’s new line of premium GPS models – Navman refers to it as the “Platinum” series – with a price to match. Still, for one dollar short of seven hundred bucks, you get a GPS with the latest NAVTEQ maps, Bluetooth, 3D landmarks, lane guidance, safety alerts and an FM transmitter/receiver for fully integrating the 300T’s phone features with your car stereo.

Like most premium GPS units, the 300T also features TMC traffic capability via SUNA, currently only available in Melbourne, Sydney and Brisbane. One nice touch that the 300T has over its competition is that the TMC antenna is fully integrated in the unit’s body; most competing units require a fiddly extra antenna.

In recent years, Navman’s done a lot of work with interface design. It’s an effort that’s seen them arguably catch up with TomTom, who have long held the crown in terms of ease of use for quick in-car navigation. It’s unusual, then, that Navman’s seemingly dropped that easy interface for a more iPhone style approach that uses menus scrolled with a finger anywhere on the screen, rather than onscreen buttons.

We wanted to give the 300T a really solid workout – not just spin it around the block once or twice on streets we really knew well. So we drove it from Sydney to Adelaide and back, giving us plenty of opportunity to test it in a city both with and without the benefit of traffic channel, as well as plenty of smaller country towns along the way, where mapping data is often suspect and routes can get a little strange, to say the least.

From an accuracy point of view, the 300T performed well. We were impressed by the speed of its initial lock-on, satisfied with the directions it gave and the general interface choices – except one.

Unfortunately for the 300T, it’s a big one. Specifically, it’s the iPhone-style “Glide” touchscreen navigation. While the menus and options are mostly logically laid out, and do make for an easy-in-theory experience, the practical experience of trying to get the touchscreen to respond promptly to commands was, to put it mildly, frustrating. It wasn’t even consistently either too responsive, or too little, instead offering a worst of both worlds solution.

There’s a good safety standard that suggests you shouldn’t operate a GPS while driving. That doesn’t stop people from trying, but in the 300T’s case, we reckon you’d be hard pressed to get it to respond properly while driving and keeping a car on the road.

The 300T has a great physical presence, a really simple interface in its plus column. It’s a great pity, then, that the unresponsive touch interface makes it all a bit moot.