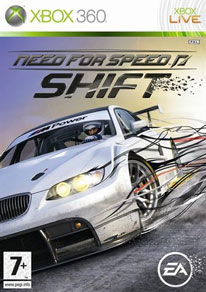 Need for Speed: Shift is a complete re-think and redesign for Electronic Arts. Now far more of a ‘serious’ racing simulation game than the (superb and sorely-missed) supercars-with-police-in-hot-pursuit game it used to be, EA nevertheless nails an amazing sense of speed, which is what it’s all about.

The team has redefined the ‘cockpit view’ and thereby drawn closer than any racing game before it to creating the feeling of the player really sitting in the driver’s seat. EA has caught up on that score with Codemasters but developer Slightly Mad Studios clearly spent more time on that, and presentation in general, rather than the handling, which is too serious for arcade racers and too slidey and glib for sim fans; the degree of drift is far too high, and you’ll find yourself sliding madly around almost every minor bend, let alone actual corner, wheels screeching in protest, whether you want to or not.

Still, there’s a superbly judged line-up of vehicles and just the right degree of upgrading and tuning, with cars you genuinely care about pursuing and acquiring to motivate your progress.