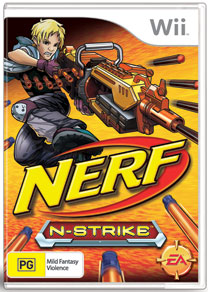 One of the first titles borne out of a new collaboration with toymaker Hasbro, Nerf N-Strike for Wii is a virtual version of those soft-missile-firing toy guns that, depending on your parental tolerance levels are either a) hilarious, safe fun for all the family or b) teeth-clenchingly annoying crap pieces of plastic that you can’t wait to throw in the trash when the kids turn their backs. And Nerf N-Strike is not entirely virtual, as it happens, because by far the best part of EA’s new offering is the fact that you get a real Hasbro Nerf gun in the package along with the Wii game.

Developed out of the EA studio in the unlikely location of Salt Lake, Nerf N-Strike’s free real-life Nerf gun is swathed in bright red and yellow colors, with matching graphics on the Wii game case, no doubt the result of extensive and earnest testing at EA HQ to find the color scheme that proves most attractive to tween boys. And indeed the primary colors are striking, so you may find little Lachlan tugging at your arm entreating you to buy the game for him if you venture within spitting distance of a videogames store on your next trip to the mall.

EA claim the Hasbro games are aimed at ‘transforming the interactive family entertainment landscape’ which is a typically corporate chunk of PR bombast and, judging by this particular interactive foray, a little over-ambitious. A very standard ‘on-rails’ light gun game (so-called because the computer controls your movement through the levels, leaving you to focus on just shooting stuff) to kick off, and then just very standard after that, the real attraction to Nerf N-Strike, as we mentioned, is that the packaged controller is a proper Nerf gun, capable of firing soft darts with real enthusiasm. So if you worry that your kids are playing too many videogames, here’s a spot of old-fashioned, traditional assault with a replica deadly weapon for them to frolic around with instead. And when they’re ready for videogames again, all you do is flick an end cap, pull out the firing mechanism of the regular Nerf gun and replace with your Wii remote.

Now you’re ready for the game, proper, but don’t expect too much. The game, as is so depressingly the case with games based on ‘licensed properties’ these days, is a real painting-by-numbers effort, with stock, fuzzy graphics, the most politically-correct, kid-friendly opponents research money can buy and a simple, ‘hub’-based game system that provides progression for the ‘Mission Mode’ as you work your way to becoming an ‘Elite Striker’.

Only it won’t be you trying to become an elite striker, we’d wager, but one of your household’s little people, because the action simply isn’t compelling enough for anyone over 12 years old. There’s a decent lineup of Nerf weaponry, with 25 different blasters differentiated by power rating, darts-per-second, mag capacity and projectile type, and it’s true that you may find your grip on the gun surprisingly rigid after the tension of playing a few timed rounds, but the fun is short-lived and the only shooting mini-games with any real longevity are, paradoxically, the ones that your sprogs are least likely to be able to understand and play.

The best thing about this package is its dual nature, though – ‘real’ toy and virtual game – so if you’re a huge Nerf fan or are looking for something for the kids to play on Wii that is a little lighter on the familiar shooter gore, Nerf N-Strike is a good choice. The Nerf toy itself is great, the transformation into light-gun with the Wii remote works beautifully, and there is more fun to be had in the multiplayer side of the game.