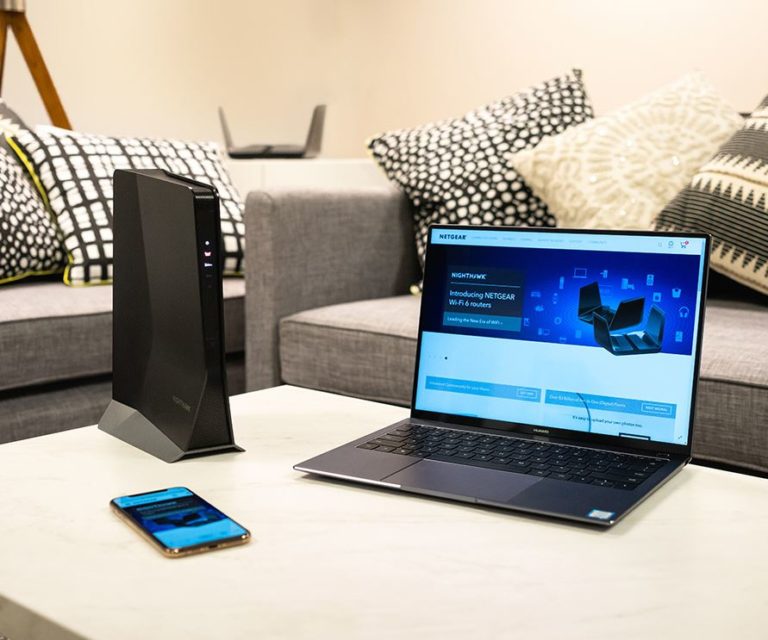 OK, do you have Wi-Fi black spots in your home? The NETGEAR Nighthawk AX8 Wi-Fi mesh extender EAX80 may be the solution. If not NETGEAR has other extenders, access points and Ethernet-over-Power solutions that could help. We recommend this article if you want to solve a Wi-Fi black spot.

I wanted to make this a simple review solely about the NETGEAR Nighthawk AX8 Wi-Fi mesh extender EAX80. But judging from the number of requests I get about solving black spots and damned SuperBoost Wi-Fi repeater scams (that take your money and don’t work) I need to tell you more about Home Wi-Fi and why things may, or may not work.

We need to talk about the whole gamut of routers, placement, extender mode or access point and more.

All current home Wi-Fi routers are at least dual-band. The 2.4Ghz band broadcasts further (maximum 100m line-of-sight and 30m through a few walls), but it is far slower (10-100Mbps).

The 5Ghz band broadcasts to maximum 30m line-of-site and 10m through walls. But it is far faster (up to 866Mbps or more with VHT80/160 aggregation).

Rule 1 – No router can exceed these distance limits. To get the best you must place it dead centre of that 10/30m circle of Wi-Fi devices. You may suffer from Wi-Fi congestion from too many Wi-Fi devices, the neighbour’s router, microwave oven, garage door openers etc.!

Rule 1a – Wi-Fi is half-duplex meaning that you get less than half the claimed speeds up and down. Gigabit Ethernet cable is full-duplex (1000Mbps up and 1000Mbps down at the same time).

Rule 1b – The routers you get free/low-cost from your internet company are CRAP. They are usually Wi-Fi 5 AC1600 dual-band (300/1300Mbps) and have low power processors and antennas. They are fine as a gateway that supports a phone line but terrible as a Wi-Fi router.

Internet comes via NBN, ADSL, HFC Cable, Satellite, 4/5G to phone or ethernet point in your home. Download/upload speeds range from a few Mbps to 100/40Mbps on NBN 100. You can stream FHD video on 25Mbps, but it is safer to have 50+Mbps if you want less buffering.

Rule 2 – That connection point is likely in the worst place imaginable – the garage, your front wall, basement etc. Refer to Rule 1. Understand if you place your router there you will get CRAP signal strength and speeds as you move further away.

To get Rule 1 and 2 right – move the router to the right place!

The best way is to get a sparky to run a Cat5/6/7 Ethernet cable from the internet point to the best location for the router. As a guide, a simple installation costs around $100 per point (one each end).

The worst option here is to simply add any mesh or a Wi-Fi extender to your system. Why? Because all these do is take an already weak signal and retransmit and even weaker one!!! Garbage signal in – garbage signal out! (GIGO).

OK, you have moved the crappy ISP router to the right place, and you are still having issues!

Now it is more about the quality of the router and its ability to support multiple Wi-Fi devices – processing power.

You should connect data-hungry devices to your router by Ethernet cable – where possible take them off Wi-Fi. PCs, TV (Streaming), Games Console (online gameplay), media centre, music streaming, etc. Most routers have four gigabit LAN ports. If you are run short connect a NETGEAR 5 or 8 port switch to give you more ports.

My advice is to use that CRAPPY AC1600 router as a gateway (for its phone port/turn Wi-Fi off). Just connect a more powerful router to it via Ethernet cable to be the backbone of the home network.

NETGEAR has a range of Wi-Fi 6 AX and Wi-Fi 5 AC routers. Let’s compare them to car engines.

But remember that at best, a V8 router will only support more connected devices. See Rule 1 – a bigger router may not solve most distance-related black spots.

This device can do one of three things

Remember Rule 1 and GIGO – No ‘extender’ or ‘repeater’ can amplify a weak signal from the main router. Do not believe the hype!

If you use Wi-Fi backhaul place the extender where it gets a good strong signal from the main router; Somewhere well inside that 10-metre sweet spot. It will then retransmit the available bandwidth another 10-metres or so.

But even that can be an issue. In our tests, we placed the EAX80 about 10 metres from the main router (three rooms away) using extender mode.

But when we shut one door, the 5Ghz channel died. It received 287Mbps (2.4GHz), and only 52Mbps (5GHz) or a total of 339Mbps backhaul. We replicated the test several times – similar results.

So, we thoroughly recommend a wired gigabit Ethernet connection. This is 1000Mbps full-duplex equivalent to 2000Mbps half-duplex). It will give the EAX80 enough bandwidth to transmit (but its highly likely to be on a different SSID).

And remember that this is a Wi-Fi 6 AX6000 extender/repeater at $549. That is overkill if all you want is a few hundred Mbps for email on the ‘toilet’.

The best placement for Wi-Fi backhaul

Well within the 10-metre circle from the main router. If you want to extend the signal upstairs (in a two-level home) and the main router is on the ground floor, then the extender needs to be somewhere line-of-sight – around the stairs to the upper level. The device has a signal strength LED to help in placement. The app will tell you how much bandwidth it has to retransmit.

The EAX80 is like a big hungry Wi-Fi device and consumes 1431Mbps of my NETGEAR AX12 AX6000 router capacity. Now it is time to reallocate IoT devices between the router and extender to balance out that use.

If you connect the EAX80 to an underpowered router in the first place, you may overload its capacity. You can throttle the EAX80 to transmit 25/50/75/100% bandwidth.

What have we learned so far?

I wanted to get strong coverage to the outdoor pool area 20-30m from my NETGEAR AX12 router. The original signal strength in that area ranged from -80 to -140dBm – totally unusable. You need -60dBm or less to have a decent Wi-Fi connection.

By placing the EAX80 inside an adjacent pool area wall, I now get signal strength from -50-60dBm. That is a partial success but the real data transmission speeds (Speedtest) are very low.

What I also learned is that dual-band extenders take a chunk of the router’s Wi-Fi as backhaul. The best you can use about half of that for the devices that connect to the extender.

The cure is to use it in Access Point mode with an Ethernet backhaul.

GadgetGuy’s take: EAX80 is great in the right place

Imagine you have a garden hose (Wi-Fi backhaul) feeding water to a big firehose (EAX80 transmission). The problem is that you can’t get sufficient water to feed that big firehose so at best you get a light spray.

One solution is to replace the garden hose with a two garden hose, e.g. (Ethernet cable full-duplex). But the problem is that the firehose now wants to be difficult and use a different name – say bushfire hose but now it sprays all the water it gets!

The EAX80 AX6000 does what it says – provided you have enough bandwidth. That means placing it closer to the existing router to get a strong Wi-Fi backhaul or using Ethernet.

Now to be fair to NETGEAR, it does extend Wi-Fi to black spots, but it is quite expensive. In reality, it is a Rolls Royce to do the shopping.

Note: This is currently the only deep-dive review of the EAX80 that points out the various issues and uses. If you purchase one, do it on the basis that you can return it if it does not give you the results you need. Then look at other NETGEAR options like Ethernet switches, Ethernet over Powerline and lower cost access points.