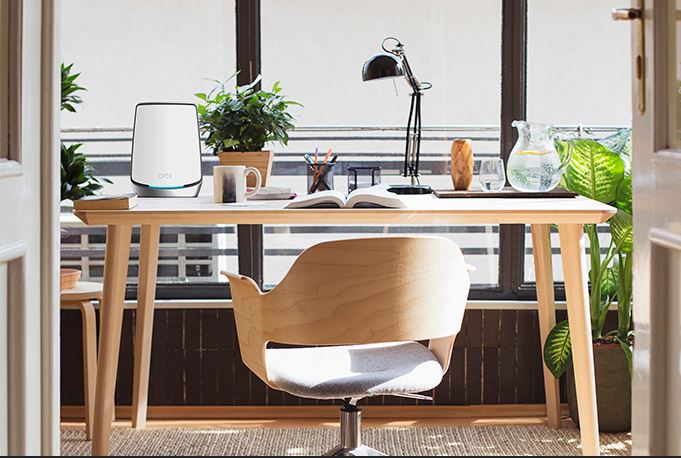 Netgear Orbi Wi-Fi 6 AX6000 Mesh may be the first mesh router I have ever recommended. Even so, there are still some caveats to getting the best from this.

Note this is a deep-dive technical review. We measure every spec against our expectations. The vast majority of reviews on the web are simple regurgitations of press releases. If an informed reader wants to add a comment, please use Disqus at the end of the article.

If you have NBN FTTN (fibre-to-the-node connected to the Router via a standard telephone cable), you will still need the crappy modem that your CSP (carriage service provider) supplies because it will likely support a phone line as well.

This is the weakest link. Most CSP modems are ultra-cheap and nasty with low-powered Wi-Fi and even less processing power for limited numbers of connected devices. But thankfully most have two to four-port Gigabit Ethernet hubs that take processing priority over Wi-Fi. It is fine to use this as the gateway as long as you don’t use (preferably turn off) its Wi-Fi, e.g., let the Orbi router take over completely as the main home network.

BTW – the caveat does not apply to NBN HFC (cable terminates in an Arris box that provides Gigabit ethernet to the Orbi) or FTTP (fibre-to-the-premises) where you plug the Orbi directly into the wall via Ethernet cable. That is unless you use the crappy old CSP router for landline as well.

Placement. If the Orbi is away from the main devices that need it, (e.g., placed in a garage or point closest to the footpath) then using the Wi-Fi Mesh satellites will still not give you a great whole of home signal. For that, you need to use Ethernet backhaul, not mesh backhaul between the satellites and the main Orbi router. Router placement is paramount to solving black spots.

‘Balance’. Think of Orbi as fast and light 4-cylinder car and uses other 4-cylinder cars (satellites) to tow distributed loads. Sometimes you need a mother of a router like an AX11000, 12-stream and extenders to carry heavy loads.

Caveat five: Be prepared to

First, it is a Wi-Fi 6 AX router that is backwards compatible with Wi-Fi 5 AC and earlier at half-speed. It distributes the internet over a home network via Wi-Fi 80211 a, b, g, n, AC and AX and cabled Gigabit Ethernet (full-duplex 1000Mbps).

Second, it links to one or more satellites to extend the main Router’s reach via a single SSID (Service Set Identifier) – network name and password. As you move around the house, Orbi seamlessly hands you off to the strongest point – Router or Satellite.

There is one thing you must remember. Wi-Fi 6 AX only works with Wi-Fi 6 AX client devices where it uses the following to increase speeds

At all other times, it’s a Wi-Fi AC router backwards compatible with earlier Wi-Fi a, b, g, n.

We need to use an analogy to clear up any confusion.

Wi-Fi 5 AC (and earlier) is like a one-lane bridge where traffic can only go in one direction at a time. So a Wi-Fi signal is sent out from the Router to any Wi-Fi client. If that client responds then the router signal stops etc. Its called half-duplex.

Wi-Fi 6 AX does not suffer the one-lane bridge syndrome when used with Wi-Fi 6 devices like the Samsung S/Note 20 or Microsoft Surface Pro 6. This is called full-duplex and currently is up to 12 lanes.

What did you learn?

What is the Wi-Fi capacity

No, Netgear is not lying about AX6000 – every mesh brand quotes the theoretical maximum aggregated Mbps.

But the reality is that

Bear with me (and these are perfect world figures)

Regardless of the fact that it retransmits it apparently at 866/1.2Gbps speeds the Orbi satellite is no better than the Mbps AX signal it receives.

Mesh can only extend that signal by approx. a further 10 metres.

Setup – could not be simpler

If it does not autodetect everything simply turn it off and try again moving the Satellite closer and there is a manual paring button.

Now we come to coverage

Orbi claims the Router and Satellite will cover 465m2 (15 x 15m) and that is pretty big considering a typical three-bed home is about half of that. But there has to be a strong signal coverage overlap between the Router and satellites for Mesh to work.

Wi-Fi AX 5Ghz backhaul is the limiting feature. It runs out of steam, e.g., unusable at about 10-metres. You can pretty well halve the signal strength every time it passes through doors, walls, stairs, floors and more.

And Wi-Fi transmits in a circle out from the Router getting weaker. A 20-metre diameter circle has 315m2.

To be clear, the Satellite may transmit at up to 1200/2400Mbps, but the effective data transfer rate depends on what it receives in the first place. It cannot increase the data transfer rate, e.g. it can’t retransmit any more than it gets from the Router.

We chose 5Ghz for the test as it is the dedicated backhaul to the Router, ergo if 5Ghz fails then the backhaul fails too. All tests are with a Samsung Galaxy S20 Ultra Wi-Fi AX device as the sole connected device. Plaster walls mean plaster drywall on timber studs.

We did not repeat the tests with an AC device, but it would have been significantly slower.

Results are a rounded average of five tests.

*Satellite placed 10m away from Router through three plaster walls

This could not help but fail as you can see from the above table it would get a -80/90 signal that is unusable. When placed 5m from the Router, the signal was usable but low.

But the great news is that using a Gigabit Ethernet backhaul brings the Satellite back to router performance.

And don’t fall for the Ookla Speedtest as proof. It is simply the speed of the internet to your device. It bears no relationship to the data transfer rates (up to 2400Mbps) between the Router and Satellite over the home network.

Seamless transfer from Router to Satellite

On most occasions, it was seamless. On occasions, we had to disable and enable the test device Wi-Fi for it to pick up the Satellite.

This was mainly due to swiftly walking up the hallway and into the room with the Satellite.

Testing the Orbi reaffirmed that MESH over Wi-Fi backhaul is not the solution unless you can get a strong signal at the Satellite to start with. Orbi does provide a basic signal strength indicator on the Satellite. Use any Android or iOS Wi-Fi analyser app – we use Network Cell Info, among others.

As far as I am aware, the Orbi is currently the fastest (no it is not AX6000 – that’s marketing speak) and gets our recommendation based on Ethernet backhaul and adds AX Wi-Fi to your home.

Features
8.6
Value for money
7.6
Performance
7.6
Ease of Use
10
Design
8.6
Positives
Extremely easy to set up via the app
Web-interface for more traditional router settings
4 LAN ports
Negatives
One SSID means that you can’t manually select 2.4 or 5Ghz bands
Yes, you can extend coverage, but no you can't boost data transfer rates
No parental controls
Don’t believe marketing hype – buy where you can return it if it does not perform
8.5