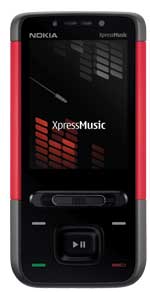 Modelled, in many ways, on Sony Ericsson’s Walkman W-series, the 5610 ExpressMusic doesn’t quite have the polish of the W890i, for example. It’s a little bit chunkier, a little bit harder to use, a little bit less sophisticated than the W890i. That’s not to say it doesn’t have its good points, of course – one of them is that it’s considerably cheaper than the Walkman.

The 5610 is a candybar phone with a keypad slider. Normally, the only visible controls are the main selection buttons and the rocker. There’s also a very nifty left-right slider that allows you to quickly move through screens or photos.

Music on the 5610 can be a little raw. The playback controls are simple enough, mirroring the sorting and shuffling modes of common dedicated MP3 players. You can randomise your music, or play back by artist, album or genre. But there’s not much more to it than that.

The Nokia 5610 also comes with a radio tuner, and the headphones double as an antenna for the tuner. We were actually rather more impressed with this than the music player, since it quickly automatically searched and tuned all the radio stations in our area.

The headphones that come with the 5610 will most definitely need replacing if you’re serious about your music. The supplied earbuds are cheap and uncomfortable, and incapable of reproducing the kinds of tones that the 5610 can deliver. When we changed over to a better set of headphones, the 5610 quickly showed it was capable of clear sounds at relatively high volume. Just not with the supplied headset.

Beyond its capacity as a music player, the 5610 has the standard messaging features, a calculator, alarm and web browser, along with some integral links to online content (like Yahoo! Go). It switches between tasks quickly and it’s one of the most responsive phones we’ve encountered.

Unfortunately, the physical controls may not let you take full advantage of the phone’s operational alacrity. While the number pad is excellent, the other controls of the phone are not nearly so good. In particular, the recessed volume controls are nearly impossible to use without long fingernails, and the selector switch is far too difficult to control, though it does get easier with practice.

The phone supports 3G and can do video talk, and it also sports a 3.2 megapixel camera with LED flash. We found photos taken with the camera tended to be colourful but frequently lacking proper focus.

Although it gets the job done as music player and phone, the 5610 XpressMusic is exceptional at neither function. At a price that’s much more reasonable than that of the Sony Walkman range, however, and with excellent phone reception and audio it is a decent option for people looking for a 3G music phone who don’t have a grand to splash down on one.